On my first day of science class for children of the fourth standard, I decided to take them out into the school garden to observe the things around us. I asked the children to look at the imli (tamarind) tree and describe it in their own words.

Science today has become more about learning facts from textbooks, while a lot can actually be learnt if children are taught to use their senses of seeing, hearing, smelling, feeling, and tasting.

So when I asked them to describe the tree, the children wanted to write that ‘chlorophyll gives green colour to the leaves’, ‘trees have different types of leaves as they have adapted to their surroundings’, etc. But I wanted them to observe things as they are. I did not want facts that they had learnt from textbooks. I then decided to guide them to use their senses to get information about the tree. I gave them the skeleton and asked them to fill in the flesh
a. Appearance – size, shape, height of the tree.
b. Measuring the girth of the tree with no instruments.
c. Leaves – the shape, size, colour, edges and any other detail.
d. The arrangement of the branches, twigs and the way the leaves are arranged on the branches.

With this broad outline in mind they set down to observe the tree. They sat around the tree at various vantage positions of their choice, some far away, some right under, some at a height on the rocks. Some thought it looked like a ghost with arms outstretched, while some others felt it was a big broom which touched the sky and was cleaning the cobwebs in the sky.

As the gaze of the children moved from the base to the trunk of the tree, they realized that the tree under whose shade they had many wonderful times was not a single tree. It was in fact twin trees. Both trees were very close to each other at the base and slowly separated as they went up. The trunks of both the trees were entangled like snakes. I could see the children groping for words to describe the details of all that they were now seeing. The science class was turning into a session on vocabulary. 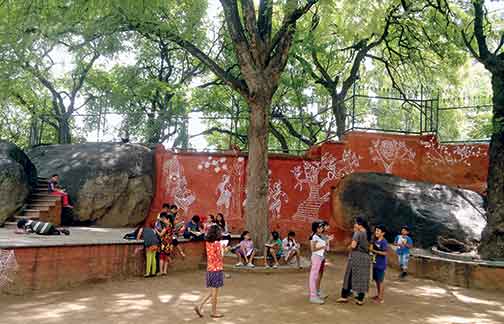 As they continued with their work, some of them noticed little yellow flowers falling on their heads. Children rushed to me with these flowers in their hands and asked me where they came from. I told them to look up at the tree more closely. It was the month of June and the tree was in full bloom. The children had always noticed only the tamarind on the imli tree, they were not aware that the imli too had its flowers. I then went on to tell them that it is these flowers that later became the imli, which is the fruit of this tree. Going a step further, a child even took care to describe the colour and the number of petals on the flower.

A child looked at the leaves and told me that there were various shades of green on the tree. Well that was absolutely true! The colour of the leaf depended on how young the leaf was! I was happy the way they were now putting words to their observations.

Watching trees through the different seasons in a year helps children understand the various seasons and in this case the entire lifecycle of the imli, which is so commonly used in our homes. This group saw the insects, squirrels, and birds which formed a part of the diversity of life that existed around the tree. They were seeing things in totality.

As I keep honing the observation skills of the children in the class, my skills too have improved. I noticed that the curry leaves tree in my backyard had bloomed and it had red berries on it.

Seeing is awareness and the more they see, the more curious children will be.

Just as most other habits are cultivated, so too this habit of observing details has to be cultivated in children. During the year, my class took time off to observe their own shadows during different times of the day. A 30 day exercise of moon watching was done to understand the waxing and waning of the moon.

My objective of teaching children to learn science through the subtle art of observation was yielding results.