The discovery of agriculture 10,000 years ago transformed human history. It was an important step in the political, cultural, and economic development of humankind. It led to human settlements which gave rise to the possibility of changes. For the longest period in human history until now, ours has predominantly been an agricultural society. While there are several positive aspects of this agricultural development, a few negative effects have been noted too. For example, the spread of human diseases*. The environmental impact of this agricultural development, however, was not major because of the non-use of chemicals (fertilizers and pesticides) in agriculture for most of this period and the slow growth in world population.

After man’s discovery of agriculture, the Industrial Revolution was the most important development in human history. Industrial revolution brought about revolutionary changes in manufacturing processes. At just 250 years old, it is a recent development and yet it has had a major impact on people’s standards of living. The major indicator of economic development today is industrialization. Many parts of the world have still not been industrialized. Industrialization in India has not really taken off even several decades after independence as is evident by the percentage of our labour force in the organized industrial sector. Most of India’s industrial production is in the unorganized sector with low skills, low wages, and no benefits. Unlike the 10,000 year old agricultural development, the 250 year old industrial revolution has had a major impact on the environment. The most important cause of this environmental impact is the chemical industry which mushroomed in the early 20th century (basic chemicals, drugs and pharmaceuticals, and pesticides) causing environmental havoc. The negative impact of industrialization on the environment was not recognized at first; vigorously denied by the industry concerned it took a long time to establish the linkages and by that time incalculable and irreversible environmental damage had already been done. 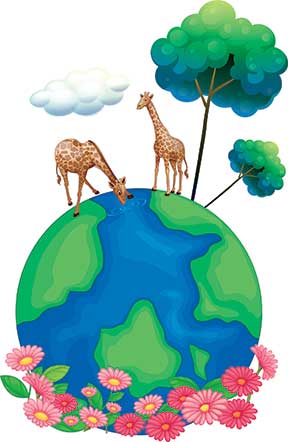 A corollary of the flourishing chemical industry was that chemicals (fertilizers and pesticides) came to be used in agricultural practices as well since the mid-20th century. These chemicals not just destroyed pests but they began playing havoc with the earth’s eco system as well. A major impact of heavy use of chemicals on agricultural land was seen on birds and this was first raised by Rachel Carson in her book Silent Spring as early as in 1962. Carson reported on the widespread dispersal of pesticide residues throughout the environment. One can then imagine the havoc caused in the later decades. Because of the early development of chemical industry in Europe, it is a much polluted continent. Later, these dirty industries were exported to the developing countries. Pollution has caused incalculable damage to air and water; this could be long term and almost impossible to clean up. The remedial measures needed to reduce the pollution caused have been few and far between. Clean technologies were slow in being developed; slow in being introduced into the production system, and very expensive. Governments in developed countries were forced to put pollution control measures in place. This resulted in the pollution causing industries merely relocating to the developing countries, where pollution control measures were almost non-existent.

The late 20th century and early 21st century saw a phenomenal growth in the services. The world first woke up to the magnitude and importance of the services when the Uruguay Round multilateral trade negotiations took place under the General Agreement on Tariffs and Trade between 1986 and 1994. Now most of the developed countries are service economies. In some of the advanced countries, the services account for as much as 70 percent of the GDP with financial services contributing a major portion. Some developing countries such as India are also experiencing a phenomenal growth in the service sector with computer software services accounting for a big chunk. This raises the question whether it is sustainable to go directly from agriculture to services skipping the industrial development phase all together.

The classification of economic activity into the three sectors of agriculture, industry, and services is very useful. Economic development came to be regarded as the shift of labour force from agriculture to industry. This is what happened in the now developed countries during industrialization. Now the share of agriculture in GDP is less than 5 percent in almost all developed countries and the share of labour force engaged in agriculture is less than 2 percent in most of these countries. In the past couple of decades the share of industry in GDP has also been declining in these countries. There has been a relocation of the industries to the developing countries, especially China. It is significant to note that China is the most polluted country in the world today. 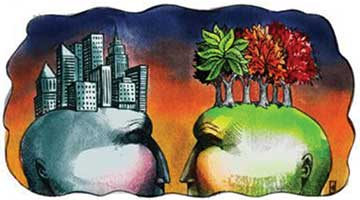 Until a decade ago the major point of discussion was environmental pollution, especially of water and air and how to reduce if not eliminate it. In the past few years, this has decisively shifted to a discussion on climate change caused by human activities. Air pollution caused by industrial activity and the use of fossil fuels has led to global warming. The increase in ‘extreme weather conditions’ all over the world could be attributed to global warming.

Plants played an important role in the evolution of life on earth. This they did through absorption of carbon from the atmosphere and release of oxygen. After billions of years of such activity sufficient oxygen accumulated in the atmosphere and led to the development of ‘higher’ life forms. The absorbed carbon eventually sank into the earth and formed fossil fuels such as petroleum and coal. Human beings discovered this source of fossil fuels which resulted in the release of carbon into the atmosphere leading to an increase in the greenhouse gases causing global warming. While some people are still disputing whether human beings can cause climate change, some others are suggesting that it may be too late to reverse the process of climate change. While this debate can go on, it is certain that while the earth survives, life on earth may not. The Paris Accord on Climate Change may be too little too late.

In the post-colonial era (starting in the mid-20th century), the newly independent developing countries chose a development model followed (not deliberately) by the developed countries during the previous couple of centuries. Not a single country followed an independent path to development using a new paradigm. It is not surprising that with a very few exceptions – South Korea and Taiwan – most of these countries have been failures. China followed a torturous route of socialist revolution followed by the development of an efficient capitalist economy. It is surprising to note that developing countries are going on the same path without thinking. What could they possibly do? One thing is that they should seriously think about an alternate development strategy, may be one in which relentless growth is not the only objective. With world population reaching seven billion it is high time to do it.

*As Jared Diamond notes in his book The Rise and Fall of the Third Chimpanzee: Evolution and Human Life.

The author is with the Centre for Economic and Social Studies, Hyderabad. He can be reached at niranjan@cess.ac.in.