Tamanna overslept as she had gone to bed quite late. She had been studying for her language test this morning and now there was no time to be wasted. Her mother had tried to wake her up for long with no effect. It was only when she mentioned the word ‘test’ that Tamanna woke up with a start. And then it was a flurry of action, with teeth being brushed along with the shower and clothes being put on while packing her school bag. Her mom ran around trying to help and made her breakfast but Tamanna was in such a panic that she refused to eat it. Her mom packed it for her so that she could eat it on the bus but Tamanna was so busy looking at her textbook that she forgot the packed breakfast on the table as she flew towards the city bus stop.

The bus was already at the stop so she ran as fast as she could and it was only because the old gentleman got the bus to wait a bit that she was able to get on to it. Tamanna thanked the old man who was her neighbour and he smiled and waved her in. Although she was only seven, her mother had encouraged her to take the city bus and experience the everyday life and this she did not mind. She found her way to an empty seat and flopped on to it with sweaty hands and a parched throat and waited to get her breath in order.

What an easy life it was to be old, she thought. No school, no exams, no panic and one could wake up whenever. Feeling more settled she looked around self-consciously to see if anyone was watching her. It was as if she didn’t exist. Everyone was preoccupied in their own way. The lady with long hair was nodding in sleep as she came from far. The uncle with a briefcase was reading his newspaper and few others were staring out of the window. A man was talking loudly on his mobile phone in front of her seat and kept repeating the same sentence. Maybe the person he was speaking to was hard of hearing? She placed her school bag down and dug inside to get her textbook so she could do some last minute revision, like her father had advised. She had to make sentences with mine, ours, theirs, us, and them. What had her teacher said by way of example? If something belongs to them then we cannot make it ours. Surely she could do better than that? A strong wind blew and the book fell down and as she bent to pick it, she saw a big package. She picked it up to find a big box of chocolates.

Whose could it be? She looked around but no one was looking at her. Should she open it? But her teacher had said that one should not take what did not belong to us. But there was no one who was missing it. She asked aloud, “Is anyone missing a package?” No one answered. She looked closely at the package and it was her favourite chocolate. She had missed breakfast and also realized she had left her breakfast at the table and she was really hungry. How would it matter if she had some of the chocolate? If she left it there, it would probably melt in some time. But then what was the point of learning and writing something that one did not practice. What if she opened it and shared with everyone on the bus? Sharing was supposed to be a good gesture; in that case, it did not amount to stealing, did it? 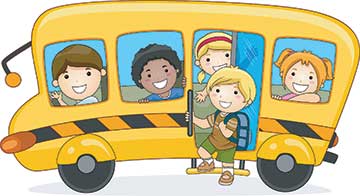 And what if she were to share and the real owner happened to be around and was probably only dozing for now? They would all turn around and call her a thief. They would hand her to the police station and her mother would have to go looking for her and she would be so embarrassed. And what about her test? She would not get to school and her teacher would find out why. Oh no, no, she could not have it. It was a bad idea and the teacher was right. We must return what does not belong to us. So whom should she give it to?

The bus conductor came around and she bought her ticket. He was eyeing the box in her hand, so she fumbled and nervously handed it to him saying she found this on the seat. He smiled and assured her that he would take it to its owner and that she was a good kid to be so honest. Tamanna was very pleased with herself, and settled down to revise for her test.

The bus started to get more crowded and she had to make space for an old lady and when another lady came with her baby, she got up and gave her seat to her. Her teacher had taught her to be caring. She packed her books in and started to move towards the exit. Her stop was not far, so it was good to get ready in advance. She saw the conductor talking to the driver and they were sharing a joke. As he saw her coming, the conductor turned his back on her. Her eyes fell on the empty box of chocolates and as she looked up, she saw the driver putting the last bit of chocolate into his mouth. She had no words to say; she felt her throat go dry. She stared at the conductor who did not look at her, instead he loudly asked everyone to move on and make space for more people. There was no time to say anything as people kept pushing her and Tamanna had to get off at her stop. She looked up again as the bus went past and the conductor laughed as he threw out the empty box. All of this could have been hers. She was in such a rage that she stamped the empty box and just sat at the bus stop and cried. She could not believe what had just happened. She had given up a whole box of chocolates because she felt she could not take what was not hers. She had believed her teacher and trusted the conductor. She was only a child and the conductor was an adult. Did his teacher not tell him all this? He did not even have good manners because he threw trash from the window. Her mom would have said, you did the right thing and would have hugged her. She wiped her tears, picked herself up and moved towards the school gate. What will her teacher say? She was going to ask her teacher whether what she did was right in this case? Her teacher must surely have an answer for this. What do you think the teacher said?

Nina Sabnani is an artist and storyteller who uses film, illustration and writing to tell her stories. Currently she is Professor, at the IDC School of Design, IIT Bombay. She can be reached at [email protected].