Not long ago, Bichitra Pathshala organized a talk show with the students of Disha Foundation, as part of their summer camp activity. In the talk show, a question posed to them was, “If you want one thing to be changed in your school, what will it be?” One boy took no time to answer in a loud and clear voice, “I would like to have a bigger playground in my school and would like to have an extended tiffin time so that I can play for a longer time.”

This spontaneous answer brings into sharp focus the need for physical activities and sports, the need for open spaces and playgrounds for a child’s healthy development and growth. The question is, to what extent are schools looking into this need? There are schools that can boast of huge playgrounds, gymnasia and swimming pools and there are schools that are crammed in congested concrete jungles. Team Bichitra Pathshala spoke to five principals of different types of schools to get an idea about the school administration’s will and attitude towards physical education. In the course of this discussion several common lines of thinking emerged along with interesting insights on integrating the physical with the intellectual.

Here is a summary of the thoughts and strategies of the five principals. 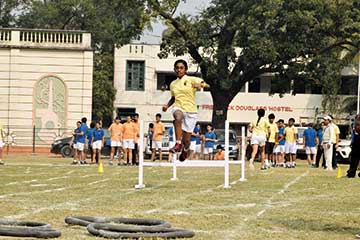 “Physical education, yoga and team sports help to build balance, speed, coordination, discipline, team spirit and so many other life skills and so it definitely is not an option but a need for holistic growth and development,” asserted Ms. Noni Khullar, principal of an inclusive school called Akshar. Indeed, all work and no play makes Jack a dull boy. Hence, all education boards across the country have made physical education a compulsory part of the curriculum. Ms. Sharmistha Bhattacharya, retired principal of a girls’ school said, “Under West Bengal Board, for classes V-VIII, PE is a compulsory subject and there is a well-constructed handbook which traces not only details of the indigenous practices like yoga and ancient martial arts but also classical dance forms, first aid and related themes of physical education.”

To what extent are the schools turning these thoughts on paper into a reality? Mrs. Anjana Saha, principal of an upscale school in Kolkata says, “The school curriculum has been redesigned in accordance with the CBSE mandate that makes PE compulsory on a daily basis for all students of the school. Our school has a unique opportunity for students to explore their sporting talent. We have a designated space for sports – the Krira Kunj and it is compulsory for all students, class III upwards, to take part in these activities. Primary school students are taught swimming and have to choose two other outdoor or indoor sports and so spend three periods a week on a physical activity besides the daily physical education.”

All schools cannot boast of the facilities that Anjana Saha’s school has to offer but sensitized principals try to optimize whatever facilities they have. MBWA offers the free use of their sports infrastructure, equipment and trained coaches, thrice a week, to students of an underprivileged school in the neighbourhood.

Joyeeta Dasgupta, principal, Techno India School, Ariadaha, shares how “at our school we integrate a PE activity with the morning assembly as the students, mainly first generation learners, lack academic support at home and require maximum teaching periods at school. To deal with the space constraint, children from different classes are sent to play on different days of the week by rotation.”

On the subject of whether one should differentiate between girls and boys participating in physical education activities and team sports, the general consensus is that PE is and should be compulsory for both genders. S.Bhattacharya cautions that “correct dietary supplements should be provided to make up for loss of energy during vigorous exercise as anaemia is an issue which needs to be addressed.”

Reactions are mixed when talking about the ubiquitous mobile phone and ‘screen time’ which has been the subject of many a debate. Joyeeta Dasgupta argues that “one cannot blame the child or parent when there is a lack of safe open spaces to play in, coupled with the fact that parents are academically aspirational. When children often return home from tuition totally exhausted, a few minutes of unwinding on the phone is perhaps their only recreation.” Anjana Saha, on the other hand, feels that parents are gradually realizing the dangers of screen addiction to mental and physical health and are availing of the various sporting facilities in the school.

N. Khullar brings to light a different aspect to the discussion when she mentions that talented sporting prodigy benefit from the positive aspect of ‘screen time’ as the school provides them with online notes and ‘make up’ tests to ensure that their academics do not suffer.

Balancing academics with sports is a challenge that all students showing promise in sports have to face. Education boards have made concessions for these students in terms of requisite attendance. Students participating in district and state level tournaments are allowed to appear in the board examinations with a lower attendance record. The boards are also providing trained instructors and allocating budgets for sports equipment. N. Khullar informs that the ICSE Board has talent spotters at inter-school fixtures who help identify children with sporting promise and recruit and train them for state teams.

In addition to the sports inherited from the West, many schools are giving prominence to Indian sports like kho kho and pitthu. Yoga has also become a compulsory element in all school time-tables. 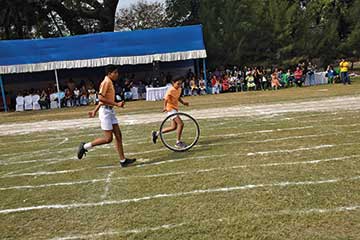 N. Khullar invites sports professionals to hold mini tournaments in the junior classes, so that exceptional sporting talent can be spotted early. ‘Catch them young’, she believes, by giving PE prominence at the primary level. Leslie Joseph echoes that nascent talent, when young, can be nurtured well with correct training, improved diet and necessary gear. Parents are informed about the specialized coaching camps and other facilities in the country, where the child may be sent during the summer vacation for further honing of the sporting skills. However, not all parents are keen on nurturing the sporting talents of their ward. Joyeeta Dasgupta says, “Unless a sportsperson has the same amount of dignity and earning capacity as other professionals, parents don’t find it worthwhile to explore their wards’ sporting aptitude and talent.”

On being asked whether parents’ attitude will change if marks are allotted for sports, most principals oppose vehemently. However, Leslie Joseph feels that proficiency in sports should be reflected in the report cards too.

Marks or no marks, the annual sports day is an eagerly awaited day in the school calendar. Colourful house flags flutter on the school playground and the green grass is sprayed with chalk powder to demarcate the positions of athletes. Schools that do not have big playgrounds, take all their students to a stadium or ‘maidan’ on this special day. “There are plenty of sporting facilities in all cities, including those provided by the Sports Authority of India,” reiterate N. Khullar and S. Bhattacharya.

Anjana Saha believes in sharing the facilities of her school with students. This is a part of their community outreach programme, through which they want to ensure fitness and health of all the children in the neighbourhood of the school.

“Sports teaches the essential lifeskills of sharing, negotiation, fair play, group dynamics and team work,” asserts Joyeeta Dasgupta. So, all students must go to the playfield. It is a good sign that all education boards have acknowledged the importance of physical education in the holistic development of a child and made it a compulsory part of the curriculum. S Bhattacharya, the senior most of the five principals interviewed, rings a note of caution, “Though the curriculum has ample scope, the final implementation is in the execution and it is up to us teachers and educators to bring about a sea change in attitude among our students, colleagues and the society at large.”

“The Battle of Waterloo, after all, was won in the playfields of Eton.”

The principals interviewed were: 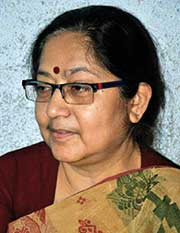 Sharmistha Bhattacharya, is a retired Principal of Ananda Ashram Balika Vidyalaya, a Bengali medium Girls school under the West Bengal Board of Secondary Education. She is still actively involved with teacher training programmes and holds regular workshops for the SCERT on health and nutrition, awareness on feminine hygiene and has written several training manuals.

Anjana Saha, Principal, Mahadevi Birla World Academy, an English medium CBSE girls school has recently introduced co-education classes and has currently both girls and boys in the primary school. As an effort to promote sporting performance, a Sports Scholarship is given annually to a talented youngster wherein the year’s tuition fees are waived. 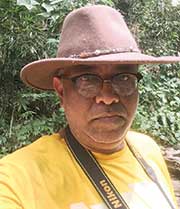 Leslie.M.Joseph is Principal, Loyola English Medium High School, Naogaon, Assam, a co-education school (till class X) under the local Assam Board, SEBA. At his school, boarders and day scholars are introduced not only to swimming, basketball and TT, but also to trekking and nature rambles with the principal leading from the front. The school has won accolades in basketball and cricket at the district and state level championships.

Joyeeta Dasgupta, Principal, Techno India School, Ariadaha was established as recently as 2014, for both girls and boys till class VIII, under the CBSE English medium Board. The school boasts not only of a talented eight-yearold who has made it to the under 13 CAB team but also to a girls state-level volleyball team. In her school, talent in indigenous sports is being nurtured through inter-class tournaments twice a month. 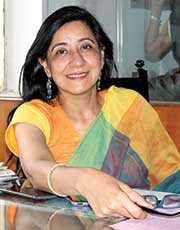 Nonie Khullar is Principal of Akshar, a coeducational inclusive English medium ICSE school till Class XII, catering to students with special needs along with those who follow the regular curriculum in the same class. Being perhaps one of the first schools in the city to have yoga as a compulsory activity for all for the last ten years, the school is also the first to organise an Inclusive Sports Day where ‘whether you cross the hurdle by jumping across or sliding below isn’t important, the fact that you tried and succeeded is.’

The author is an environment educator and a founder member of Bichitra Pathshala. She may be reached at devikakar@gmail.com.