Teacher Plus doesn’t actively market itself. With only seven members on the team, we have come to rely heavily on the word of mouth publicity. So I was all ears when Sushma (who handles administration) told the rest of us that Teacher Plus was being given a wonderful opportunity to market itself. We were getting a free stall at the 2nd edition of the Hyderabad Kids Fair, a 3-day affair in November. Now you may wonder, just as we did, what a teachers’ magazine would do at a kids’ fair. We asked the organizers and they told us that yes, this was a kids’ fair, but it was also a school expo. With that they caught us hook, line, and sinker.

After four months of complete inaction (we knew about the fair in July 2013), we raced against time to finish preparing our promotional material and visiting cards to carry to the fair. Here’s a brief report on our experience. 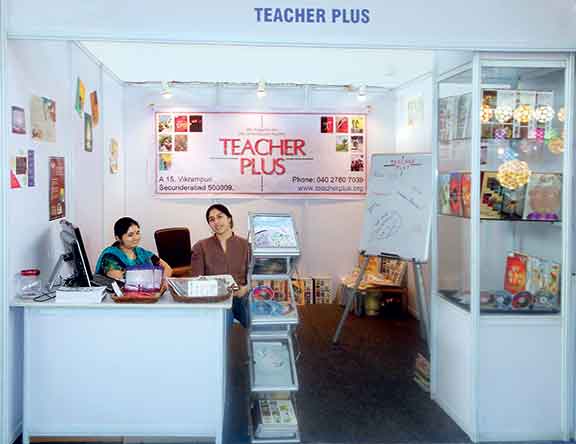 Day one: The Teacher Plus team arrived at the venue good and early to set up the stall. A little while later the other stall owners started coming in as well. The team of four who travelled from the Teacher Plus office in Vikrampuri to the venue 20 kilometers away was very enthusiastic about this novel experience for the magazine. But our excitement and anticipation didn’t last long. We realized that our neighbours to the left were selling ‘healthy snacks’ and those to the right were selling clothes for women and children. Now don’t get me wrong. I am all for healthy snacks and I love shopping for clothes. But what was this haphazard arrangement? It seemed like the stall locations had not been given any thought. Random stall locations resulted in disorganized stall placements with schools, educational aid providers, health providers, and food and clothes manufacturers sitting awkwardly next to each other. The fair also opened to an ear-splitting ‘Lungi dance’ and ‘Kevu keka’ (local version of ‘Munni badnam hui’). We don’t work under a ‘silence please’ sign in the Teacher Plus office but this was something we did not expect at a ‘school expo’. To deflate our enthusiasm further in the nine-hour duration of the first day at the fair, just 30 people visited our stall while our neighbours selling clothes and snacks didn’t have time even to breathe.

Day 2: Despite a dismal first day, we showed up on day 2. Hope reigns eternal at Teacher Plus. Expecting another lazy day in the office, we brought along books to read and games to play. But Day 2 kept us on our toes all day long. While we were nowhere in the league of our neighbours, we had our moments. We met a subscriber from Orissa who bought all our bound sets and worksheets and made our day. After a boni (first sale of the day) like that things just couldn’t go wrong. We had a lot of visitors at the stall enquiring about the magazine. We even managed to get some subscriptions.

Day 3: Our participation at the fair followed the heartbeats on a heart rate monitor. After the high of Day 2, Day 3 seemed to drag. This is not to say that we didn’t receive subscriptions or enquiries on this day but I suppose once you see cloud nine anything even slightly less will not seem enough.

The three long days were exhausting but were they worth it? We did of course get noticed by a lot of people who may otherwise have not known the existence of such a magazine. But whether we will participate in another kids’ fair is a big question.