Good teachers do not teach – they inspire. 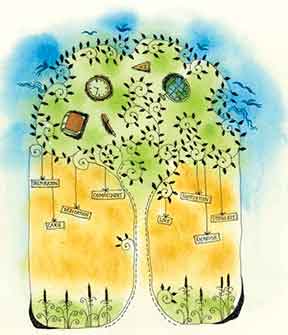 Years ago, while putting together an issue of Teacher Plus, one of the photographs we used was that of a design being created on a still-wet clay pot. The headline above it read “Mould it beautiful!” It drew a question from a colleague, who was also a perceptive teacher, “Are you saying that children should be moulded into shape by teachers?” The implication was that it would spell disaster – for perfectly moulded pots meant fitting children into moulds that left no room for individuality, spontaneity, and distinctive development. While that was hardly the intention, the possibility of creating such “perfection”, monotonous and uniform, through teaching cannot be denied. This is one of the pitfalls of teaching that teachers must necessarily avoid: a good teacher is not one who teaches; rather, she/he is one who inspires students to learn to be their own persons, investing their lives and endeavours with a passion and a joy that makes life wondrous.

Over the years, in my engagement with numerous teachers and students as well as parents, I have time and again found this to be true. It is not the lessons taught during the daily grind of the school day that make the difference in the long run, but the memories of the engagement with ordinary individuals with some extraordinary traits, her/his ideas and responses to situations, and the interactions one has had with them that remain etched in one’s mind. Yes, teachers are influential enough to affect character. When negative, they can pull one down, unless one works hard to find or create the opposite; when positive, they stimulate, enthuse, inspire.

One of the teachers who I can never forget was my geography teacher in secondary school. A rather old man with a shock of white hair, his interesting discussions in the classroom instilled in me a deep interest in the subject. He also had an interest in drama and dramatic productions: training a group of us to put up a play for the annual day, he exhibited directorial and histrionic skills that transformed a bunch of juvenile teenagers into theatre artistes. As he helped us emote, he opened up for me a new world of understanding of the play of emotion; the attention he paid to the little things and the big, the drama within the play and the drama that was taking place between us as he worked to bring the characters alive in us, the passionate interest he displayed even in things like the costumes and the make-up displayed his profound love of the work itself and the genuine joy he took in it. His reward, clearly, was not in the applause of the audience, but primarily in the creation of a memorable performance. The lessons, that remain with me today, over thirty years later, have nothing to do with geography: instead, the lessons are that passionate endeavour that cannot but bring alive all that it touches and spreads joy and contentment, that engaging deeply with what is – not just what exists but situations, feelings and responses as well – sustains life and makes it worthwhile, that dedication and commitment result in fulfilment.

The author is a freelance writer, editor and a former member of the Teacher Plus team. She can be reached at sheel.sheel@gmail.com.