Children with special needs, particularly those with developmental disabilities, may have cognitive challenges in learning but you will be amazed that many students with autism and intellectual disability enjoy physical activities! It not only develops gross and fine motor skills (physical development) but also has many other benefits. Physical activities promote social skills, peer group interaction, positive behaviour, speech, language and communication. There are different fitness exercises which empower the differently-abled in their daily regime to maintain a healthy lifestyle. Some of them set an inspiring example for everyone and these are discussed in this article. 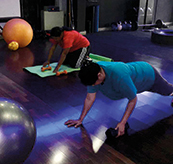 ‘Sahithi’ is a young adult with Down’s syndrome, living in Secunderabad. Her parents have started sending her to a local gymnasium called “Sweat n Burn”. It has been five years since she has been attending this fitness centre, with constant encouragement from Mrs. Babitha Jacqueline Xavier, a certified functional and celebrity trainer. Initially when Sahithi joined, she was not able to perform activities – such as continuous jumping, skipping and hopping. Sahithi is now able to do workouts such as exercise with ropes, tyres, etc. The professional trainer says it is important to understand the needs of these children. As individuals with intellectual disability, they may have certain associated health conditions such as thyroid or other hormonal imbalances, and obesity problems. She suggested light weight resistance exercises for Sahithi rather than heavy weight lifting. Her regular workout has reached a consistency of one hour duration now. Customized programs are important for individuals with special needs as they learn by imitation, modelling, prompting leading to a gradual fading. Also immediate reinforcement is the trick of training, says the physical instructor. Sahithi enjoys the gym. She has not only learnt physical activities but has also made friends here. On a few occasions, she takes the lead in some exercises as well and guides new learners.

Sripada Rohan, a teenager with mild autism resides in Hyderabad. He had been diagnosed with this condition when he was young. His mother has taken up special education as her career and completed a Master’s degree in this field so that she could be better prepared to care for her son. In his growing years from a toddler to a teenager, it was very challenging for the mother as he had problems socializing, communicating and concentrating. To enable her son to overcome these challenges, the mother enrolled Rohan in the State Sports Academy and took personal interest to train him in different games. Rohan fortunately got great support from Mr. Rehaman, Special Olympic Trainer. He now participates in activities such as running, bocce, jumping, cycling, etc. These activities not only kept Rohan occupied but also improved his attention span, communication and socialization skills. Rohan also won a district level completion in running. This is a sign of success in a healthy competition! 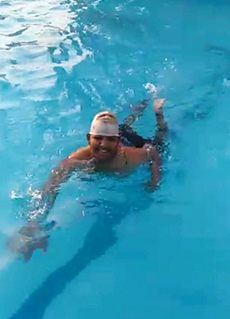 c) Sports
Ashish is a 17-year-old boy with autism. He is from Bihar and lives in Hyderabad. He has limited expressive language. However, he is a talented swimmer. It was the family which recognized this special talent. Ashish’s elder sister regularly takes him to the swimming pool for training under the supervision of a trainer. Ashish was my student. I had limited knowledge about skating; Ashish introduced me to the sport and even taught me a few moves. Swimming and skating had therapeutic benefits on him. They helped him fight obesity, maintain a balanced body mass, reduce occasional self-biting and control thyroid. Ashish personally enjoys swimming. 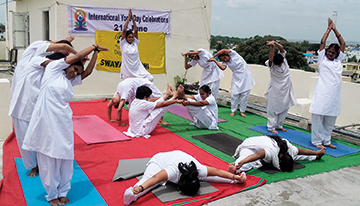 Mrs. Anitha Madhusudhan is a certified yoga instructor. She works at Swayamkrushi located in Medchal district of Telangana. The motto of the organization is self-reliance for individuals with intellectual disability. She always acknowledges that it is a great pleasure to teach yoga to children with special needs! Students attend yoga classes twice a week in small groups where they learn different breathing exercises, asanas (postures) and formations. There is documented evidence that certain techniques like ‘Bhujangasan’ ‘Sirshasana’ and ‘Halasana’ increase blood circulation and reduce hyperactivity for people with cognitive disability (Phatak 1983). Students of Swayamkrushi performed on the International Yoga Day and have been awarded for their spectacular display.

To conclude, there are various activities which promote physical fitness, maintain good health and lifestyle for the differently-abled. To build an inclusive society we all should create opportunities for children with special needs to participate in different fitness activities. Remember, “Endurance is the secret of physical fitness!”

The author is Special Educator, Swayamkrushi, Hyderabad. He can be reached at sudhirmarkham@gmail.com.