Writing in 1938, Gandhi observes:
Up to the age of 12, all the knowledge I gained was through Gujarati, my mother tongue. I knew then something of arithmetic, history, and geography. Then I entered a high school. For the first three years the mother tongue was still the medium. But the school-master’s business was to drive English into the pupil’s head. Therefore more than half of our time was given to learning English and mastering its arbitrary spelling and pronunciation.

It was a painful discovery to have to learn a language that was not pronounced as it was written. It was a strange experience to have to learn the spelling by heart…. However, for the first three years, it was comparatively plain sailing. 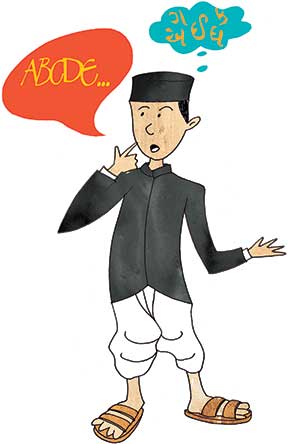 The pillory began with the fourth year. Everything had to be learnt through English – geometry, algebra, chemistry, astronomy, history, and geography. The tyranny of English was so great that even Sanskrit or Persian had to be learnt through English, not through the mother tongue. If any boy spoke in the class in Gujarati which he understood, he was punished. It did not matter to the teacher if a boy spoke bad English which he could neither pronounce correctly nor understand fully. Why should the teacher worry? His own English was by no means without blemish. It could not be otherwise. English was as much a foreign language to him as to his pupils. The result was chaos. We the boys had to learn many things by heart, though we could not understand them fully and often not at all…. I know now that what I took four years to learn of arithmetic, geometry, algebra, chemistry, and astronomy, I should have learnt easily in one year, if I had not to learn them through English but Gujarati. My grasp of the subjects would have been easier and clearer. My Gujarati vocabulary would have been richer. I would have made use of such knowledge in my own home. This English medium created an impassable barrier between me and the members of my family, who had not gone through English schools…. I was fast becoming a stranger in my own home. I certainly became a superior person. Even my dress began to undergo imperceptible changes. What happened to me was not an uncommon experience. It was common to the majority…. High schools were schools for cultural conquest by the English. The knowledge gained by the 300 boys of my high school became a circumscribed possession. It was not for transmission to the masses. (Gandhi 1938: 279-80)

In two brief paragraphs, Gandhi presents a diagnosis that is as valid today as it was in 1938. A mother tongue medium education facilitates learning; English medium teaching makes learning difficult for most Indian students; and English medium schooling creates a separate class of citizens.

But we need to broaden Gandhi’s definition of a “foreign medium”. For the children of Indigenous Peoples, linguistic minorities, and speakers of dialects not considered the “standard language”, the language of the textbook and the school might well be the “foreign medium”. This essay tries to map the current place of English in the multilingual landscape of India. But before we come to English education, let us see three other scenarios: the education situation of the indigenous peoples; of children in rural India going to government schools; and of those going to low-fee private schools.

Indigenous peoples
Literacy among the indigenous peoples (called “adivasis” or “tribals” or “Scheduled Tribes” [ST] in India) has risen from 8.5 per cent in 1961 to 59 per cent in 2011. This is a significant increase, but still far from the country’s overall literacy rate of 73 per cent. Female literacy among the adivasis in 2011 was 49.4 per cent. The reasons are not far to seek. These are people subjected to multiple deprivations: habitat loss, forced displacement, discrimination and cultural devaluation. They are equally poorly served by the education system. There is an acute shortage of teachers. Contractual (and poorly qualified) teachers are often seen as a solution. Given that many teachers in adivasi schools are not local residents, teacher absenteeism is high. Many teachers are also not adivasis themselves and often bring various prejudices against the students to the classroom. One result is that hardly any adivasi community receives education in the mother tongue. Confronted with such systemic, cultural and linguistic barriers, it is not surprising that the dropout rate is high: by class V, 35.6 per cent of adivasi children dropout; by class X, 70.9 per cent dropout (GoI n.d.). Indeed, activists say this should not be called dropout; it should be called push-out.

The mainstream poor
How do the rest of rural India’s children fare in education? Not so well, it turns out. India’s crisis in learning has been meticulously documented since 2005 by the Annual Status of Education Reports (ASER) – a citizen-led survey of about 700 000 children. These surveys test reading and arithmetic skills in every district of rural India. As their website explains, “All children in the age group 5-16 are administered a ‘floor level’ reading test in the language of their choice (the test is available in 16 Indian languages).”

The survey finds that in 2014, in rural India, only 48 per cent of students enrolled in the fifth grade are able to read a grade two text. That is, 52 per cent are not able to do even that. Over half of the children are at least three grade levels behind where they should be. Further, this is a declining trend: 54 per cent of students were able to do this task in 2010. Even in India’s best performing state, Himachal Pradesh (75 per cent), nearly a quarter of the children are three years behind.

In fact, Himachal Pradesh and Tamil Nadu were the only states from India that participated in the international comparison, the 2009 PISA (Programme for International Student Assessment) test. The test compared 15-year-old boys and girls from 74 countries and territories in mathematics, science, and reading; India was 73rd.

Low-fee private schools – are they the answer?
Whether in rural or urban environments, there are many household factors that contribute to a child’s learning: parents’ educational levels (especially the mother’s); parental involvement in education; family income; and paid, private tuition. As the ASER 2009 report notes, once those factors are controlled for, the contribution of private schools to the child’s learning seems negligible in many states: “the learning differential between government and private schools falls drastically… from 20 per cent to a measly 5 per cent”.

An Azim Premji Foundation (APF) 2013 report, “Private Schools Are No Panacea” goes even further – it “suggests that contrary to popular perceptions, private schools are not adding value as compared to government schools to the children in the main subjects” (p. 15; see my blog, Rao [2015], Bolii 4 July 2014). Previous analyses like ASER 2009 ask the rhetorical question: “Are Private Schools Really Performing Better Than Government Schools?” Their answer is “no”.

What about our elite schools?
In 2011, Educational Initiatives and the IT company Wipro together published Quality Education Study (QES), a study of 89 “top schools” (as the report called them) – all urban-Indian, and English-medium. It concluded that “performance in class 4 is found to be below international average”. However, Indian students catch up in the eighth grade, “mainly due to their higher achievement in procedural questions (i.e., questions that require straightforward use of techniques or learnt procedures to arrive at the answers)”.

This study also compared students in these schools to an earlier study (conducted by the same organizations). As in the ASER reports (noted above), “learning levels were found to be significantly lower than what was observed in 2006 in the same schools tested and on the same questions.” The fall was highest in mathematics and English. The study comments: “our top schools don’t promote conceptual learning in students. QES results show that there has been a further drop from the already unsatisfactory levels of 2006” (cited in Rao 2013).

However, the ASER reports as well as the QES and APU studies indicate that it is not easy to convince communities that English medium education and private schools do not automatically mean better learning.

Just one in five Indian students who finishes 10 years of schooling, enters college. But given the quality of education that this student has had, it is not surprising that he or she struggles – not least with English, the medium of higher education in India.

English has certainly benefited the already privileged – those economically well-off and those with a tradition of formal education in the family. But for the vast majority of Indian students, English promises much, but delivers little. In a country with increasing inequalities, English has become a source of social division and exclusion, thereby undermining the social justice agenda of education in a democracy. Besides, India is heavily invested in integrating into the global corporate economy. Aspirations, especially among the young, are soaring.

Thus, for both the health of India’s democracy and in order to realistically prepare a workforce for a modern world, India needs urgent measures to resist and relativize the hegemony of English. English needs to be learnt well, but learnt additively (not subtractively at the expense of the other languages of the learner). Further, English must remain a part (but only a part) of the country’s multilingual ecology. We need to stop English from becoming yet another tool that reproduces traditional inequalities, and a Hydra that gobbles up other languages. The false, illusory promise of English for the entire population is an existential threat for a large section of the Indian population, both the underprivileged and the aspiring middle classes. Gandhi again:
The medium of a foreign language through which higher education has been imparted in India has caused incalculable intellectual and moral injury to the nation. We are too near our own times to judge the enormity of the damage done (Gandhi 1938: 279).

The author teaches courses on language policy, multilingualism and Esperanto at Azim Premji University, Bengaluru. His blog (in English) on language and education is Bolii, bolii.blogspot.com. He can be reached at rao.giridhar@apu.edu.in.