Not even of India’s independence did Gandhi say that it was his best gift, but of his education system he declared that it was his ‘last and best gift’ to the people of India. He knew that he had not devised anything as radical and path-breaking as this and that is why he called it “Nai” Talim. Had he called it Kranti Talim, probably everyone would have sat up and taken notice. But he didn’t. Maybe he didn’t want to ruffle too many feathers even then.

Today, most people who are familiar with Gandhi’s education system see it as a good vocational training method at best, and at worst, a re-creation of the evils of our social system. In his own time and of course even today, Gandhi has not just been criticized for his system of education, but practically pilloried. It is truly unfortunate that those who were responsible for carrying forward nai talim reduced a whole system to a mediocre practice. One needs to look deeply into why he undertook to develop this system of education and how, he hoped, it would impact the emerging nation.

Does Gandhi have relevance today? Is it worth discussing his system of education (unheard of even among most educationists) today? It is over 75 years since he launched it and his followers have long abandoned it. Yet today one sees a new interest and new followers, outside the traditional Gandhian fold, who want to pursue his ideas and see them in today’s light.

Too revolutionary…..
“Revolutions are disturbing and most people do not want to be disturbed. There were a few people of imagination and insight who welcomed Gandhi’s educational revolution from the beginning, but most educationists voiced doubts,” says Marjorie Sykes who headed Gandhi’s school in Sewagram Ashram. I too believe that Gandhi’s concept of education was far too revolutionary for the ruling sections of India, even within the Gandhian fold. It would have disturbed the social fabric far too much. 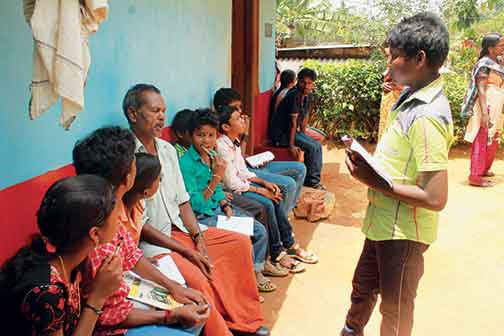 He was not talking about reforming the existing system or tinkering with it or making some major or minor changes here and there. He was talking about throwing out the entire system and replacing it with a completely different one. This is why he called it a NEW system, in effect, a revolution was intended. In one swift sweep, his schools would demolish the centuries old social, political, and economic hierarchical structures and replace them with a Just Social Order.

Writing in Harijan in 1937 he makes the purpose of his education clear: “I am a firm believer in the principle of free and compulsory Primary Education for India. I also hold that we shall realize this only by teaching the children a useful vocation and utilizing it as a means for cultivating their mental, physical and spiritual faculties. It will check the progressive decay of our villages and lay the foundation of a JUSTER SOCIAL ORDER in which there is no unnatural division between the `haves’ and the `have-nots’ and everybody is assured of a living wage and the RIGHTS OF FREEDOM” (emphasis mine).

Creating the microcosm of a new society
It is important to look at the context in which Gandhi developed his goals of education. There was no justice with the imperial domination of India and what was worse was the domination of the lower caste by the upper castes, the poor by the rich, the peasants by their landlords. Gandhi foresaw conflict of interests. He wanted that a new generation grow up believing in equality, justice, humanity, and non-violence. For this high purpose he designed an education where the means would be the ends – where peace could be practiced in everyday life, where cooperation, not competition could be a way of life, where hand craft enhances the skill and the mind and the spirit would be engendered and respect of all irrespective of caste, creed, religion, economic status would bring about a new humanity.

When he asked that ‘mother-tongue’ should be the medium of education, he intended that English education which had created an elite of its own, catered to the colonial masters and had created a colonial mind-set, should be done away with. It would mean that there would be no more people who would serve the British as diligently and loyally as had happened in the past. This further meant that the elite could not access jobs in the colonial office and get the privileges that went with it. It was meant to put an end to a privileged class altogether.

Nai talim’s process of instruction, according to Gandhi, was handicrafts. This meant that the purpose was not production of handicraft products, but to use the natural gifts and curiosity of the child to work with their hands to teach all subjects, including values. The idea was to teach through handicrafts, not teach handicrafts alone. One can teach math through carpentry, biology through farming, health through sanitation, language through cultural forms, history and geography through spinning or weaving. In fact, all of these subjects can be taught from any one activity. It was not to make items to cater to the tastes of tourists but rather it was to manually make such items that contribute to the village economy. Unfortunately, it was reduced to “vocational training” for poor village children. In fact, today most people equate nai talim with vocational training, divorced of the pedagogical processes that were to be intrinsic to it.

This process had multiple ends from what one can see. One was that from a pedagogical angle it would make the whole learning experience interesting and meaningful. Second, that it involved experiential learning which is what children are doing all the time. Third, it would teach a skill which can be used by children at a later stage of their lives. Fourth, it gave credence to the professions of the village by bringing all these crafts into the classroom. The old system of learning from elders was dying out and the classroom was alienating the new generation from the old. Here was a way of bridging that gap. 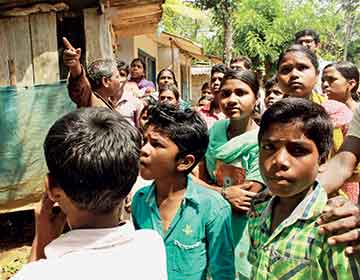 To me the most important goal was what it would do to the minds of the children. We know that the village was divided along caste-based professions. Here in his school every child would practice the work of every profession that was available in the village! It would remove the divisions of caste in these young minds. One can imagine the kind of turmoil this would create in the village let alone in the towns. With this simple move he intended to undermine and rip apart the age-old social fabric of the hierarchical caste-based system which had divided and oppressed our people. Not only the students, but the teachers too would practice these professions and learn them well. Here manual work was to be placed on a pedestal and given dignity. No profession was too low or too high to be practiced.

These schools were to be a microcosm of the society of the future. The children and teachers would practice everything they wanted in later life here, experiment with ideas, build models of living. The child would later try to recreate this world of values in the real world. The purpose was not to preserve the existing village but to recreate it as he envisioned it – ‘village republics’.

Nai talim wanted that the schools be self-reliant and not dependent on state funding. Gandhi rightly believed that once you took state funding you also had to cater to the state’s curriculum. The curriculum of the state he had already rejected en toto. Gandhi believed that education of the child was too important a matter to be left to the state. For Gandhi, self-reliance was not a political slogan to be bandied about. It was his creed. He truly believed that if every village were to be self-reliant then no one could dominate them or subjugate them. He foresaw and feared exactly the happenings of today when the same subjugation process in more subtle forms enter not just our markets and villages but also our universities and schools.

In conclusion …a curriculum framework to suit the times
Gandhi did not provide a blueprint, as some would have us believe, rather a curriculum framework that allows anyone to develop our syllabus according to the situation and the times. He was not parochial or a nationalist. For him these principles applied as much to the British children as to the Indians. His vision was the world, but to get there he began in his ashram. Here he experimented and experimentation was his creed. This is what he would want us to do too. We have to use the school as a means to break down barriers that have crept into our society in a big way and are threatening our social and democratic fabric. We have to be imaginative and devise ways that can bring the just social order he dreamed of. Circumstances are compelling us to look at his ideas again and experimentation has begun in small ways. I believe, just as Marjorie Sykes concluded her book, that “In so far as it is a TRUE VISION, its time will come.”

The authors are part of the Vidyodaya Trust and School and work with adivasi children in the Nilgiris. They can be reached at bramrama@gmail.com.