Teaching is about using a variety of strategies to help students gather information. It is about teaching how to ask questions to clarify concepts and gain some control over their own learning. For teachers to be able to regularly evaluate their impact in the classroom and adjust their teaching methodology in response to what they see, the student learning in the classroom needs to be made visible. The concept of seeing clearly what teachers are teaching and students are learning is known as visible learning.

The components of each level in terms of visible learning

Strategies for deep learning
Connect: Create a community of learners
The biggest effect on learning happens when teachers become learners of their teaching and learners become their own teachers. Leaders need to spend time getting feedback, collect evidence on aspects that have the most impact on student outcomes. 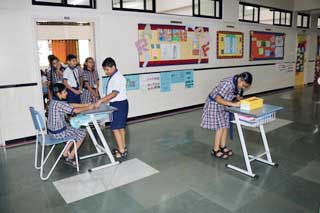 Empower: Activate students to lead their own learning
Active and meaningful educational experiences are critical in helping students reach deeper learning goals. Teachers need to look at assessment as learning and involve rubrics to measure the learning outcomes. E.g., A “mock election” representative of the electoral process, or generating electricity by building wind turbines can lead to deep learning.

Contextualize
Subjects are not to be taught in isolation and when learning is connected to larger themes, concepts and across multiple subjects, learning becomes more meaningful and deep1.

Beyond school walls
In Mumbai we have a mobile museum which works on a theme every year and visits schools free of cost. If you have similar initiatives in your city invite them to your school or plan field trips for children.

Judicious use of technology
Interactive boards have entered many classrooms. However, more often than not, they are used only to teach and not as a tool to drive student learning. For digital technology to contribute to deep learning it must be transformational rather than transactional.

Some of the core skills for deep learning are:
1. Critical thinking/problem solving – an example is dealt with under the jig-saw technique.
2. Creativity and imagination.
3. Communication and collaboration.

Fact 1
In late 1354, King Magnus Erikson, first ruler of combined Norway and Sweden, commissioned an expedition to rescue the vanished Norwegian colony on the west coast of Greenland. Apparently, they sailed early the following spring never to be heard of ever again.

Fact 2
50 years ago, a stone slab was found clutched to the roots of a tree near Kensington by a farmer named Ohman. The inscription was dated 1362. It recorded the massacre of explorers by Native American groups. The artifact is about 30 × 16 × 6 inches in size and weighs 202 pounds (92 kg). Ohman’s 10-year-old son, Edward Ohman, noticed some markings and the farmer later said he thought they had found an Indian Almanac.

Fact 3
The slab was placed in the great hall of Smithsonian institution in Washington. It was called one of the important archaeological objects ever found in North America by historian Hjalmer R. Holand. Although for the first 10 years it was considered to be a local fraud by Prof. Breda (a professor of Scandinavian literature and languages).

Questions for group work:
1. How would you feel about the discovery if you were farmer Ohman? Why?
2. If you were Ohman would you trust – Holand or Breda? Why or why not?
3. If you are a reader, whom would you trust? Justify.
4. If you were of Scandinavian descent, what would your feelings be?
5. What do you think happened to the expedition? Base your narration on the facts given to you.

Process
Students to research on the internet to gather more information on the Kensington stone slab and the expedition.

Groups are formed with equal numbers. Teacher uses the jigsaw technique for teaching2.

Steps of the jig-saw method

Step 1: Divide students into three groups or multiples of three if the students are large in number. Try to keep the groups diverse in terms of capability. Each group should have the same number of students.

Step 2: One student from each group is appointed the leader. During the initial stages of the introduction of this technique, the leader should be the most mature student in the group.

Step 3: Divide the day’s lesson into three segments based on the facts presented.

Step 4: Assign each student to learn about one fact. Make sure students have direct access only to their own concept. Provide references and resources – internet facility if possible.

Step 5: Give students time to read over their concept at least twice and become familiar with it. There is no need for them to memorize it.

Step 6: Form temporary “expert groups” by having one student from each jigsaw group join students from other groups assigned to the same segment. E.g., all students assigned to fact 1 will get together and discuss. Give students in these expert groups time to discuss the main points of their segment and rehearse the presentations. The expert group is an opportunity for students to share their ideas and learn.

Step 7: Bring the students back to their original groups.

Step 8: Ask each student to present her/his concept to the group. Encourage others in the group to ask questions for clarification.

Step 9: Move from group to group, observing the process, guide them if needed. Leaders can be trained by whispering an instruction on how to intervene if any group is having trouble.

Step 10: At the end of the session, conduct a quiz.

During this whole process, the teacher acts as a facilitator. Teacher should lend support or explanation wherever necessary. 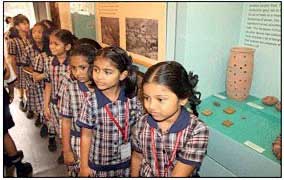 A contrast model
The entire elementary school was rehearsing for the Republic day programme. They had the flags of different countries and the national flag to hold on to and march. Unfortunately, one of the students dropped the national flag. The rehearsal was abandoned. The children were given a lecture on why the flag cannot be dropped. The teacher launched into a diatribe in which she expounded that only those wounded in the battle would be pardoned for dropping the flag. She continued to paint a frightening picture by stating that those who fought for their country must be willing to die for their country.

Comparison of the jig-saw technique and the contrast model
In the first example, the teacher guided them towards the right answer but the students were involved in a healthy discussion, used their cognitive processes to do research, share within the group and there was no stress. In the second model however, the students were admonished and exposed to a frightening visual imagery that caused stress and the chances are that the admonishing by the teacher would not have led to any learning.

Using the KLEWS technique3
Subject: Science
KLEWS is a take-off from KWL where K is knowledge, W is wondering and L is learning.

A KLEWS chart consists of the following columns:
K = What students know already.
L = What we are learning.
E = Evidence they learned through observation: This is generally filled in tandem with the L column. This could include observations, experimentation results, and calculations.
W= What the students wonder about: These are questions that arise from their investigation.

Topic – Germination – Grade 2
The objective is to define germination, to identify the factors that help seeds germinate and to learn new scientific vocabulary.
1. Planned activity before class: A project done at home.

2. The teacher asks them an ‘overarching’ question – What is germination? What factors are needed for germination?
3. Students think, pair and share.
This is a co-operative learning technique that involves thinking, pairing up to discuss and sharing ideas with the group.

The answers are listed out in column 1 – Knowledge. If there are answers that are similar, they are grouped together. They should be able to define germination at this stage in their own words.

Some of the expected answers would be – seed changes colour and shoot grows, roots are seen, the stem becomes long, seed shrinks in size, seed did not grow at all.

By asking these questions, the teacher acts as a facilitator to build the L column.

6. What is that question that still makes you wonder? How can some seeds remain underground and some above? Which is a quicker method of germination?

7. Students are introduced to scientific vocabulary: hypogeal and epigeal germination and cotyledons, which are written down in the last column S – Scientific terminology.
8. The teacher gives assignments to the students to study the new concept of germination. Initially, the seeds can be grown in a pot and later transferred to a kitchen garden.

All scientific concepts could be built using this technique.

Deeper learning has a great potential to redefine what teaching and learning looks like in the 21st century. It’s time for us to invest in deeper learning and designate it as the new normal.

The author is the principal of Pawar Public School Kandivali, Mumbai. She has a PhD in Education and has worked both in schools and B.Ed colleges. She has written the book, From Chalk to Talk: The Art of Teaching based on her experiences that span over 30 years. She can be reached at pramilakudva2016@gmail.com.