On the first day of school after our Christmas vacation, we sat down for Circle Time with one class of eighth graders. Welcoming them after the break, we asked what they would like to talk about. Amidst whispers and murmurs, Hriday spoke. “I want to ask a question. We have been hearing about all these protests in Delhi. I don’t understand why these people are blaming the government,” he said.

That was a powerful moment in our classroom. We did not have to work on setting the stage for a conversation we had been waiting to have with our students. That question brought us straight to the heart of what had been troubling us during that Christmas break – the gang rape and murder of the 23-year-old woman in Delhi. Newspapers and television channels were full of it, so were homes, streets and Facebook status updates. The students knew about what had happened. Some were able to recount details of what happened to the young woman and her male friend on the bus ride. Others knew about the protests happening in various cities, including some of the slogans; one of them: “Don’t tell me what to wear. Teach him not to stare.” Others were acquainted with the police investigations, the medical condition of the woman before and after she was flown to a hospital in Singapore, and also the Honey Singh concert in Gurgaon that got cancelled after strong public outrage against the lyrics of his songs. Sahir had also managed to watch the video of Kavitha Krishnan (National Secretary of All India Progressive Women’s Association) that had gone viral on YouTube and social networking websites owing to its powerful appeal for ‘bekhauf azaadi’.

One of us had participated in a silent protest march in Mumbai and came back very moved and charged with the desire to do something substantial. One of us had written a blog post seething with rage at deep-seated patriarchal mindsets that valorize males and oppress females, often justifying inequalities, discrimination, and violence. This Circle Time session gave us a lovely opportunity to show our students what makes us sad, what inspires us, what makes us want to stand up and make a difference. The students in our class heard us speak passionately about sexual violence and about the sea of solidarity that emerged all over the country in response to a crime that was not one woman’s tragedy but a symbol of the hurt, pain and anger of multitudes of women who decided to stand up for themselves and of men who found the courage to stand alongside. 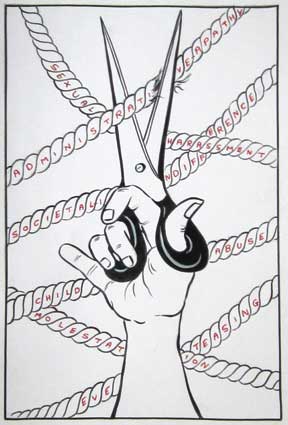 As teachers of young people, we believe that it is important to bring the world outside the classroom right inside. We were utterly convinced that we needed to discuss these things with the students, instead of trying to foolishly shield them from these uncomfortable, disturbing realities. In fact, ‘rape’ is a very important ‘event’ and ‘theme’ in To Kill a Mockingbird, the novel they are studying this year. This made our discussion even more topical and immediate.

A few days later, while planning a three-hour Integrated Learning session weaving in History, Hindi, and English, we decided to use the Kavitha Krishnan video as a starter. It drew a resounding applause from the students. It had clearly made an impact on them. They looked inspired and eager to share. They were able to understand and summarize the key arguments made by the speaker, and also offer their own insights on gender discrimination in our society.

They were also able to connect the video to Rabindranath Tagore’s ‘Where the Mind is Without Fear’, a poem that is part of their curriculum and also their school diary, and spells out with remarkable intensity the same theme of living without fear, and breaking away from narrow societal frameworks to create a future that carries the promise of hope. In his notebook, Sahir wrote, “Tagore’s poem asks for equality and the eradication of social evils like divisions of caste and religions. Kavitha Krishnan is asking for the freedom of women to wear what they want, go where they want, when they want. The poem asks for the freedom to hold one’s head high, to search for knowledge without fear, to find reason in the darkness of thought. Kavitha Krishnan asks for fearless freedom, for stereotypical social norms to be pushed aside, for a world that ‘has not been broken up into fragments by narrow domestic walls.”

Fear is something that we rarely talk about though it is at the very root of the conflicts we are part of and surrounded by. Fear is a very tangible thing for children, as it is for adults. In their case, fear of asking a question that might invite a teacher’s ire, fear of giving a ‘wrong’ answer that might make their classmates laugh at them, fear of failing a test, fear of being punished by adults for not meeting up to their expectations, fear of not knowing how to communicate that one is being abused, etc. Big and small fears conspire to keep us away from realizing our full potential.

To take forward this theme, we decided to introduce the students to ‘Bol Ke Lab Azaad Hain Tere’ (Speak, for your tongue is free) a celebrated nazm by Urdu poet Faiz Ahmed Faiz. We chose this not only for the meaning it carries but also because this was the poem recited by actor-activist Shabana Azmi at the silent protest march in Mumbai, and also because the young woman from Delhi was referred to as ‘Nirbhaya’ or the fearless one in several news reports.

The lyrics and metaphors were a bit difficult for them to understand but the English translation helped, and the meaning was effectively conveyed. We realized that when Hriday raised his hand and said, “The poet is saying that you have very little time, so use it well and speak what’s on your mind.” It is in this spirit that we wrote this piece. Students never fail to surprise and inspire us.

The authors are teachers at Shishuvan school, Mumbai. They can be reached at chintan.backups@gmail.com and chinikumsmailbox67@gmail.com.