A new advertisement for an international media conglomerate proudly proclaims that it is the ‘life’ in your day, showing you the myriad ways in which it touches lives every day. This is testimony to how media has become an inextricable part of our lives. With the seeming omnipresence of the media, advertisers are finding new ways of penetrating into our everyday lives with suggestions ranging from what to wear, how to commute, and how to decorate your house, to what to eat!

With television viewership, amongst adults and young children alike, hitting new highs, we are bombarded with a slew of advertisements through the day. The amount of time children spend watching TV has been rising steadily in recent years. An Assocham survey conducted in late 2010 revealed that children between the ages of 6-17 watch TV for an average of 35 hours a week. Taking into account these statistics and the fact that children’s personal preferences can be targeted and changed by TV advertising, brands looking to tap into the vast market potential of this age group are targeting children in their quest to expand markets and create cradle-to grave (loyal) consumers.

We have all grown up with ads for milk additives that promised to make children grow taller and stronger. But advertisements for children have moved well beyond the health drinks and the occasional bar of chocolate. Most ads targeted at children these days are for fast food and sugary snacks. Given that as adults we find it hard to resist the lure of crunchy chips or lip smacking chocolates, especially when our favourite star recommends them, it is understandable that children are particularly susceptible to advertisements. Repeated exposure to these advertisements also ensures greater recall, making it more likely that the children will demand the products. Peer pressure in schools adds to children’s demand for the new snacks and candy, making it difficult for parents who refuse to comply. 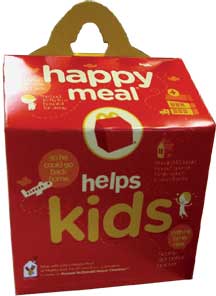 Many experts are wary of commercials targeted at children, especially for food items, as studies have revealed that children under the age of 6 are unable to distinguish between programming and advertisements and are unable to grasp their persuasive intent. The world over, several commercials that advertise unhealthy food items to children have come under the scanner, as many recent studies have shown a direct link between children’s eating habits and preferences and exposure to advertisements. One such study found that children exposed to candy commercials were more likely to choose candy over fruit for a snack as compared to those who were not exposed to the ads.

Advertisements on TV that show children refusing to eat vegetables but perking up at the offer and enjoying processed and artificial foods only serve to reinforce such behaviour in children. Further, research has also revealed that watching advertisements of young adults, in good shape, eating junk food leads kids to believe that junk food is not only not harmful but actually beneficial to their health.

With several lifestyle changes over the last couple of decades, there has been a rise in obesity globally, especially among young children, and consequent rise in non-communicable lifestyle diseases. In India, an estimated 20% of the school-going children are overweight and another 15% are at risk of being overweight. While sedentary lifestyle is a major contributing factor, change in food habits has had its share of influence in this. With a growing body of research pointing to a link between advertising and children’s eating habits, the World Health Organization is urging countries to look into encouraging healthy habits and curb children’s exposure to marketing for unhealthy food items.

In keeping with the guidelines from WHO, many countries are implementing laws to curtail marketing to children, while several others are mooting similar measures. Long-term experiments with limiting ad exposure have shown positive impacts on children’s eating habits. For example, Quebec in Canada, which has banned fast-food advertisements targeted at young consumers in electronic and print media for 32 years now, has seen a 13% reduction in fast food expenditure. Children in the province consume roughly 2 billion to 4 billion fewer calories and are healthier as a result.

UK has banned junk food ads in shows aimed at children aged 4 to 15. The use of cartoon characters and celebrities in high-fat food ads aimed at primary school children has been banned as well. While in the US, the time devoted to ads in children’s shows has already been curtailed, plans for tighter junk food restrictions are being debated. Media corporations are also showing initiative to battle the bulge with Disney banning junk-food advertising on all programs for children.

While exposure to advertisements in the media is part of the problem, easy accessibility to junk food and in-store promotional activities make it harder for parents to get their children to eat healthy. Have you noticed how supermarkets always place junk food at the eye-level and within reach of children? It is precisely to address this part of the problem that the authorities in India are planning to implement a ban on junk food in school canteens starting next academic year. While Uttar Pradesh has already taken the lead in this regard by banning fatty foods in and around school premises, other states are also set to implement similar regulations in keeping with the Food Safety Authority Guidelines. 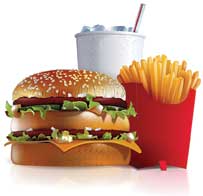 While laws might restrict exposure to unethical ads and access to unhealthy food items, efforts from parents and teachers could go a long way in encouraging healthy eating habits in children. Explaining to children the hidden and subliminal messaging in advertisements can help them distinguish between programming and marketing. Helping them understand the long-term effects of unhealthy snacking could aid in discouraging the habit and improve their self- control. Also, as a society we need to rethink the way we reward children with certain food items, for example, treating them to fruits in place of candy and ice cream for finishing their chores. We need to discourage children from consuming sweet foods near bedtime and not condone the excessive consumption of any food.

With increasing exposure to various media, advertisements are inescapable. Given that advertisements today are less about the product and more about the characteristics one can gain by consuming the product, it would be prudent to start educating children about the commercial intentions of companies and the persuasive tools used by marketers at an age when they can rationalize and are no longer motivated by emotions. Teaching children the importance of healthy and conscious choices will hold them in good stead in the long run.

The author holds a degree in Communication Studies and currently works for a sports PR and communications firm in Bengaluru. She can be reached at sinchana.appachoo@gmail.com.