‘[..] a school master is a productive labourer, when in addition to belabouring the heads of his scholars, he works like a horse to enrich the school proprietors. That the latter has laid out his capital in a teaching factory, instead of a sausage factory, does not alter the relation.’ (Karl Marx in Capital Vol 1)

The above insight from Karl Marx, written more than 150 years ago will still resonate with the reality obtained in Indian schools (private schools if I may add), where while much is being made about students and harried parents, there is little talk over the plight of its equally harassed if not more, school teachers. Of course in government schools a certain degree of power and status is still embodied in its teachers as bureaucrats, albeit minor ones and the kind of salaries that government school teachers draw these days also confers on an otherwise beleaguered profession a certain status. In contrast, in private schools (and there is such an increasing demand to privatize education these days for government teachers are seen to be notoriously negligent), teachers emerge as no more than a member of the proletariat, subject to many of the ‘systems’ set in place by the proprietor/entrepreneur, who seeks to run schools like a business enterprise replete with fancy mission statements, ‘quality’ policies, checklists and flow charts. These ‘systems’ effectively pan out more as teacher controlling measures. On the other hand, in government schools – elections, natural disasters or census operations compel the teachers to give short shrift to their stated job description and instead prioritize administrative matters of the state. Either way, teachers are more or less emptied of their sui generis ‘skill’ of teaching where adhering to ‘systems’ and sacrosanct routines of finishing lessons on time, conducting tests on time, completing evaluation on time, compiling and collating of data on time and all these to be further documented in all its minutest details in pre-formatted report cards on time defines much of teaching. And these numbers have to look good so that the school managements, education boards and the state executive can make tall claims about the learning that supposedly transpires in these educational institutions, which again purportedly vindicates the systems that engenders these commendable pass percentages.

Teaching as obtained today is far removed from the desired ideal of being a reflective, contextual and laboured practice. Today, a teacher can be seen resembling an industrial worker and mostly a woman, in assembly line, factory like setting. Such a general shift in teaching has largely resulted from a move to a political economy where education embodied in literacy and numeracy is considered sine qua non for employability. Schooling thus became mass-based and no longer the privilege of the ‘classes’. But then as history and capitalism has it, given the divided world that is obtained before us, only those with certain privileges and access continue to secure education of a kind that places them at the helm of power and control and this is as well for only then can such a position of privilege and power be maintained. To quote the maverick American writer and scholar, Edward Griffin, “…True education was to be restricted to the sons and daughters of the elite. For the rest, it would be better to be productive skilled workers with no particular aspirations other than to enjoy life… (in the process) the vast majority are consigned to a system of education where the goal was – and is – to create citizens who were educated enough for productive work under supervision but not enough to question authority or seek to rise above their class.” Establishment of such instrumentalist nature of work goes back to thinkers like Fredrich W Taylor who sought the breaking down of complicated jobs to its simplest components, by which less skilled and lower paid workers can be hired to do these simpler activities. This deskilling process results in losing control over their own labour and the skills acquired over the years, atrophy. The skill of planning, controlling and organizing is taken out of a workers’ hand to a minority who do all the planning and managing.

This is precisely what is happening to teachers’ work as well, where they end up ‘dispersing’ very application oriented knowledge, in which knowledge itself is redefined as no more than a skill or a very instrumental ability that every student should be ‘equipped’ with. But why and how do teachers themselves peddle such pedagogy? This is by making the job of the teacher itself scalable and replicable, where teaching is summed merely as a package, packed with lesson plans, flow charts, checklists, worksheets, assignments and test papers which the teacher merely has to unzip and lay out in a linearity. In this, computer technology becomes another means of emptying teaching. It is probably for all these reasons that teaching is also feminized, for society’s misogynist attitudes characterize women as having no further capacity beyond doing such routinized chores and certain nurturing that teaching also involves is seen more intrinsic to women in their perceived maternal qualities. And the fact that women are seen as being more pliant or conditioned to be in any case, further induces schools to look for women to teach. 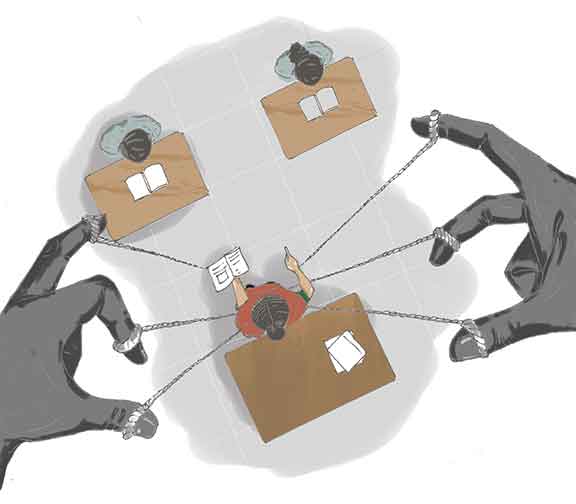 Contrast such marginalization of teachers today to a time in an earlier era where teacher as an authority figure was absolute. This was best described in the entity of a Guru. Tagore regarded, ‘…the Gurus as moral and spiritual preceptors and of teachers who were men rather than machines…but such Gurus cannot be made to order nor can we get them as schoolmasters by advertising for them.’ It is the inner worth of a Guru to quote Tagore ‘…(who) puts life into his pupils with his own life, lights their lamps with his own learning, and makes them happy with his affection. By giving to his pupils things that cannot be bought and sold and are really beyond all prices, he will earn from them a devotion that owes nothing to the fear of being punished…’

But this could be a very romanticized and ideal rendering of a teacher – something many of us from our living memories would find difficult to digest whence many, if not all, teachers in our experience often emerged as tyrants to whose brutal whims we were subjected. But then it is only in visiting such an ideal envisioned by the likes of Tagore, Gandhi or J Krishnamurti that we can restore the credibility of teaching.

The process of learning is slow and difficult which cannot be expedited by making teaching mechanistic and generic. Therefore, we can explore the following suggestions: while mass based schooling is here to stay, the rather linear, assembly line, modular system of schooling that we have, has to give way to a more relaxed time frame of teaching and learning to unravel the entire pedagogic process in a way that results in learning that is steady, more genuine and comprehensive. Second, we need to have a kind of supportive system where failure by teachers in serving 100 per cent pass percentages is not stigmatized. Third, we need to have a more decentralized and autonomous administrative structure where teachers, rather than bureaucrats, frame the curriculum, based on the specific situation obtained in classes and schools and the kind of demographies in which schools are located. ‘The one size fits all’ approach is barely tenable. Fourth, teacher accountability rather than being to the state and school managements, has to be to the community of parents and peers who are sensitized, involved and taken into confidence, being informed about the way the curriculum has been shaped, suitably tweaked and executed in the respective subjects or classes. Finally as a result, the community itself then also takes the responsibility of caring for teachers both in cash and kind and even taking them to task for negligence and irresponsibility. Such a set-up would be similar to the situation obtained in pre-colonial times when the school teachers and schools were seen to be the responsibility of the entire village community.

Much of the above suggestions of course fundamentally alters the way we not just fashion our conventional understanding of education and schooling but also the way we have imagined ourselves as a society where we seek to tailor our identities and selves to dictates of markets and reified norms and practices. Pray, on what basis have we arrived at this notion and compulsion that all should finish schooling by 16-17, degree by the time we are 20 and then immediately be employed, and so on? If the sole purpose of education is employability, Gandhi himself envisioned that children can be made productive at a young age and schools themselves can be transformed as small industries where spinning and other crafts are included in the curriculum and taught, products made and sold which also help in financing the school and provide some income for students as well. In other words what one is suggesting is a kind of society where learning capacities, education and pedagogy fashion our existence rather than economy or normative structures. It is perhaps not for nothing human societies are known as learning societies and therefore let us make learning central to our existence.

While teachers need exposure and education (the word training again is problematic, suitable more for skills that is replicable and scalable, something teaching as I see it, is not) is required, people at large have to be convinced that teaching is a contextual, highly laboured process that is to be valued, so recognized and rewarded. Only with transformation of teaching will education be transformative, to which all of us otherwise make pious assertions.

The author is a research scholar at the Centre for the Study of Social Systems, JNU. He can be reached at Krishna.rs@gmail.com.