The recent protests and debates around the question of sexual violence in New Delhi and the rest of the nation have given us an opportunity to unpack layers of experiences that are usually compressed into simplistic cause and effect formulas. While our analytical faculties must respond to more urgent questions of legal reform, public safety and gender sensitization in relation to police, media, and politicians, addressing issues at a more rudimentary level is also in order.

Instead of searching for an etiological angle as to why such crimes happen or what motivates anyone to act upon their impulses, the tenor of our outrage could perhaps shift a bit towards understanding continuities and ruptures in our own thinking about gender and sexuality, shaped mostly in school and at home with the world at large as our testing ground. While we grow up learning gender behaviours like we learn to communicate, gender is neither natural nor instinctive. Rather gender performativity, political philosopher, Judith Butler argues, is a product of a series of acts, behaviours and habits learned, repeated and naturalized over time. I am not suggesting we suddenly expose these rather pervasive regimes of socialization overnight and transform our thinking towards a grand rejection of culture that is reproduced over generations. Rather, I propose working with smaller-scale, experimental initiatives in Indian schools that might provoke us to think a little outside the gender box. 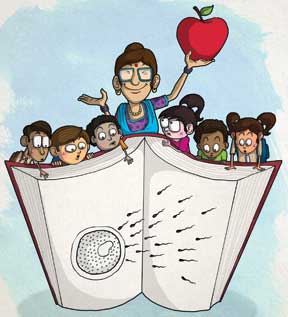 This proposal isn’t part of an established set of successful experiments from other contexts but favours an ad-hoc experimental approach to talking about gender and sexuality within the classroom without the need for immediate institutionalization. Stories about traumatic experiences in school owing to non-conformance to acceptable norms of gender behaviour are fairly commonplace. While it might be easy enough to reproduce and perform gendered behaviour – boys as loud and active, girls as shy and passive – it is generally extremely difficult to talk openly about how one relates to their own gender. In most cultural contexts in India as elsewhere, it is easier to just act your gender out than deviate from it lest one invite ridicule, scorn and in some cases, violence. Even as we see the problem of rape in gendered terms, women as victims and men as predators, it’s the boys in school, on the contrary, who stand exposed as victims of physical and psychological abuse when they don’t behave like typical boys. Attention to the femininity of girls is often reserved for when they become adults and are then valued in terms of their skills for household work. I offer these examples as mere generalizations that are indicative of how our gendered thinking has material effects that reverberate throughout our lives rather than as experiences exclusive to our gendered selves.

The absence of formalized sex education in Indian schools is perhaps really a symptom of a more profound silence around matters of sex and sexuality in Indian culture. The ordinary texture of school life, instead of allowing a possibility to break this silence, ends up reinforcing it. As opposed to a prescriptive curriculum, the experimental thinking can take any form, for example, an impromptu class exercise that involves writing a few words (e.g., sex ratio, masculinity, femininity, unisex clothes) on the blackboard and asking the class to work in teams and prepare a two to three minute speech on them. These words, instead of broaching gender, sex and sexuality directly, could ease the students into arriving at these issues through an open discussion.

Teachers may also use the English or other language classes to include issues of gender and sexuality within reading and comprehension exercises. They may ask the students to collect newspaper items on issues relating to gender (in case sexuality appears unsettling or discomfiting) and discuss some of them in class. Field visits might offer another opening into experimentation where students may be asked to take observational notes about how people conduct themselves in public. Invariably, insights about issues of gender and sexuality on the part of students are likely to emerge.

I recognize that such experiments can prove daunting and even embarrassing for teachers and students in various contexts. I also recognize this model of experimentation is likely to have more takers in urban schools than rural and its limitations in terms of the medium of instruction. The suggestion here isn’t however adopting one size that fits all. An overhaul of school curriculum to include gender and sexuality based education might meet with greater resistance, and while that must continue to remain the overarching goal, small experimental initiatives can allow for entry points into these debates to open up. Where an institutional policy on gender and sexuality might perhaps remain embroiled in bureaucratic, social and cultural politics, there is nothing stopping teachers to experiment with their own teaching methods to integrate a conversation on gender and sexuality in the classroom.