There is a thin line of difference between failure and success…… an appropriate education makes all the difference.

This core belief, has sustained the education offered at Little Angels’ SAPLING, an alternative school in Mumbai, for nearly 28 years. A pioneering institution, SAPLING as the school is more popularly known, absorbs students who are forced to leave mainstream schools mainly due to academic, behavioural, or medical reasons. By adopting a curriculum that offers myriad opportunities for learning in varied situations and areas, SAPLING is able to transform these students into successful learners with hopes of a productive and fulfilling future. Much before ‘life skills’ became a popular concept, SAPLING incorporated it into its curriculum as it did in other areas of learning like arts, vocational learning, regular physical training, outdoor activities that included mountaineering camps, field trips; enabling the participation of each student in the activities offered by adapting the same to suit their unique needs and further ensuring that learning takes place for all. 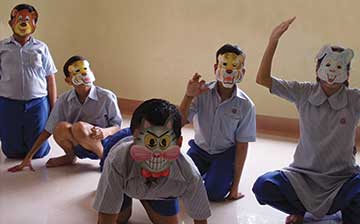 Education for all, learning for all, a student-friendly and student-centred education in an atmosphere of mutual respect and tolerance: these are intrinsic to SAPLING as they are to the RTE, and yet today the school is in danger of having to close or change direction because it is unable to fulfil a crucial requirement of the RTE Act; that of being recognized by the government. Not just SAPLING, but other alternative, innovative, and experimental schools find themselves in the same situation. We cannot go into defining these terms but for the purpose of discussion, we could take schools that differ from the government notified rules and regulations pertaining to educational institutions as being alternative. It is sad that while there has been a great deal of debate and discussion on the issue of 25% reservation for disadvantaged children under RTE, not much notice has been taken of the RTE’s neglect and dismissal of alternative forms of education currently existing in India. The government’s flip-flop on this has hardly helped matters. In July 2012, the MHRD in response to a petition filed by Shreya Sahai who petitioned the court for the government to include home schooling and alternate education under Sec. 2 of the RTE, said that the RTE is not against alternate education. In October of the same year, the government changed its stand and affirmed that alternate education is not permissible under RTE. More recently, the High Court of Delhi, in response to the petition of Shreya Sahai, passed an order that “it would not be justified for the Court to issue directions to the Government to make any amendment to Section 2(p) of the Right of Children to Free and Compulsory Education Act, 2009 as it is the right of the Government and legislature to amend any Act or any provision of the Act.”

What then are the options available to schools like SAPLING? Can such schools come together and make a representation to the government asking for norms and parameters to define them? Do such schools tie up with mainstream institutions as resource rooms to ensure their continued existence? Do they change direction and function as centres of learning offering extra classes rather than a full time educational programme? Or do they take the decision to shut down not because they want to but because they are forced to since they are both unable and unwilling to comply with the provisions regarding school recognition under the RTE? It must be emphasized here that though the schools respect the RTE, it does not really allow them the freedom to function in the manner they find most effective and suitable for their unique philosophy and hence deliberations on the way forward.

As soon as the RTE came into force, a meeting of alternative schools was convened to discuss the implications of the Act on them. A representation was made to the government to emphasize the necessity of the continued existence of alternate modes of education but not much has happened since then. In Mumbai, SAPLING took the initiative of consulting with some non-mainstream schools, about the steps to be taken to attain recognition. Unfortunately there was no consensus and at the time of writing this, lack of clarity continues.

At SAPLING, our commitment to our cause and to our students will continue, either as an independent institution or as part of a mainstream school, though we will continue our endeavour to be recognised as an alternative school.

The author heads an alternative school in Sion, Mumbai, called Little Angels’ SAPLING. She can be reached at jaya_ranga@yahoo.com.

Let’s keep the alternatives
Doing things differently – for a reason
Some concerns from an alternative school
Parents must have a choice
Innovation is important
Adivasis, education and the RTE Act