Anyone can ‘become’ a good teacher. I say this from experience. But he or she has to lead by example. I’d like to narrate a couple of incidents from my teaching life that illustrate this. 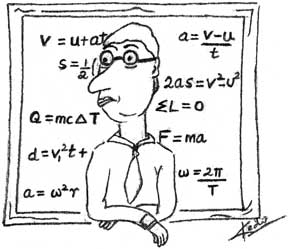 I used to take extra classes to complete my class XI and XII physics courses. Whenever I announced these classes, I insisted that the students be in the classroom at least 5 minutes before time. But, I observed that even if I reached before time, a few students always came late. The next time I announced the extra class, I went to class thirty minutes after the scheduled time. Everybody was surprised and asked me why I was late. I told the class that some boys had the habit of coming late and I did not want them coming late even on my birthday, so I waited until they had entered the class. The class became silent and then I heard a chorus of “Happy Birthday Sir” with a loud round of applause. Those boys never came late again.

Teachers should also be careful about the kind of speech they use. The teachers who indulge in loose talk in the class end up with egg on their face when their students use such language in public.

One of my colleagues had the habit of adding a bad Hindi word to every sentence he spoke. He did this unintentionally; it had become a way of life for him. He often used the word even in class. During a farewell meeting of class XII students, when this teacher requested to make a speech, some girls he had taught requested the Principal not to allow him to speak because of his foul language. This was an eye opener for all of us in general and for the teacher in particular.

A good teacher must also possess a positive attitude towards life and his/her surroundings. The teacher should be able to make the students comfortable enough to communicate their problems to him/her.

I remember the case of a girl who used to always top her class. Just before the class XII physics exam, she came sobbing to tell me that she wasn’t writing the exam because she could not remember anything she studied. The physics exam was the first one and if she didn’t write it, I knew she wouldn’t clear her exams. She looked to me for approval of her decision. Instead, I told her one of my own stories. I did my M.Sc from CUSAT, Kochi. I was a fairly consistent student and always got good marks. I had never failed in any exams. In CUSAT, the M.Sc programme was based on a semester system and every other day we had internal examinations, which I was not at all used to. In one such examination, I got only 7 out of 40. I had failed! I did not want to continue studying there. I wanted to go to a college where I wouldn’t have to go through this rigorous routine. I went to meet the HOD, (late) Dr. Satyanandan. He asked me why I wanted to leave. I told him. My teacher simply said, “You have failed only in one subject, that too in a class test of 40 marks. There are 2200 marks in total to achieve. Leave the 40 and you still have 2160 marks. Work hard and you can make it.” I didn’t know what magic effect these words had on me. I continued at CUSAT and passed out with a 4th rank in the university.

When I narrated this story to the girl, she was surprised and asked me, “Sir you too have failed in a class test? If so I will appear in tomorrow’s exam and do my best.”

She wrote the exam and topped it. Now, she is a doctor in the Netherlands and my Facebook friend.

The author is a senior PGT in Physics at the Government Higher Secondary school, Namsai, Arunachal Pradesh with 20 years of varied experience teaching rural Arunachali tribal adolescent students. He can be reached at gemleo@gmail.com.