I recently had the good fortune of visiting a school in Burgas, Bulgaria. Burgas is the fourth largest city in Bulgaria, the capital being Sofia. It was vacation time (August) so there were no students either in the classrooms or on the playground. However, like many Indian schools, there were teachers inside the building; teachers who had come to put together their act before the new academic year commenced. I met the Principal of the school, Ms Andonova. She was warm, exuberant, and generous with her time and information both about the school and its curriculum. She was obviously busy, but she set aside plenty of time to show me around the school and talk to me about the education system and the curriculum. I had heard a lot about the school and therefore told her that it must take tremendous hard work to keep such a school running; she brushed aside the compliment with, “I have an excellent set of teachers, so they contribute towards the reputation.” I can’t imagine what it must do to the confidence of the teachers in that institution for a Principal to have such implicit faith in them.

Bulgaria is a small country with a small population, so it does not face the rat race for school admission like India does. Education is compulsory for all children till the age of 16. The law binds parents to send children to school regularly. The medium of instruction in the country is predominantly Bulgarian. However, some schools do offer subjects in English, German, French, and other languages. All schools in Bulgaria are co-educational.

Within secondary education, there are two kinds of schools. One is the gymnasia or high school and the other is the tehnikum or vocational school. There are also special schools for the differently abled.

Children are admitted to kindergarten at the age of three or four and study there till the age of 6. Kindergarten is not compulsory and many parents do not opt for it. They prefer to have their children at home and to teach them at home. However, it is mandatory for children to attend a two-year pre-school program before starting regular school. This is probably so that the children adapt to a routine and get used to the idea of adjusting to teachers and to other children before they get into hardcore academics. Public schools offer free primary and secondary education. Schools, especially in the big cities, have a shift system. Schools in the villages, on the other hand, still have the luxury of keeping students all day long. The morning shift is normally from 7:30 to 1:00, while the afternoon shift is from 1:30-7:00. Schools function five days a week. Most classes are for 45 minutes. The neighborhood schooling concept has caught on, but it has still not become binding for children to be sent to the school closest to their residence. 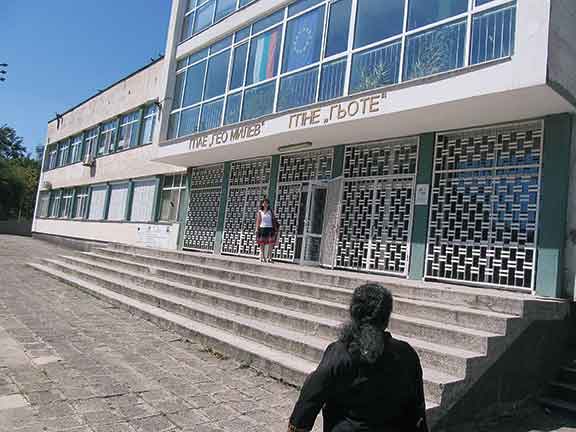 September 15 or the working day that is closest to the date marks the first day of the school academic year. The first day of school is a festive occasion in many Bulgarian schools; it is a festive celebration that sometimes includes singing, dancing, and speeches. The national flag and the school flag are hoisted; the national anthem is played while the school bells across the country ring. In some schools, as the new admissions walk into school, an announcer calls out the names of the students as they enter the building premises. Parents and family gather around to take photos and applaud. Students (both old and new, primary and high school) present their teachers with bouquets. Occasionally, cabinet ministers also visit schools on this day. The Principal gathers students in the auditorium and some students perform before an audience. There is an air of excitement and anticipation about the academic year. The Principal then sprinkles water on the floor as a symbol of another new beginning, a good luck omen.

The last day of the academic year is dependent on the grade since it is linked to the age of the students and the curriculum that needs to be covered by the teachers for that particular grade. So grades one and twelve end their academic year on or around May 24. It closes for the high school earlier so that students have time to study for the public examination. The school year closes on May 31 for grades 2, 3, and 4; grades 5-7 continue to have school till June 15, and grades 8 to11 close on June 30. This system probably ensures that the teachers are able to focus more on classes that have a heavier syllabus. It also allows students of the lower classes to have more holidays and therefore have more time to play!

The school year consists of two terms or sroka. The first term ends on February 4, and the second term commences on February 9, with a break of very few days. Christmas break is from December 24 to January 6, while the spring break is from April 1 to April 10. As in India, if the school is forced to close because of adverse weather conditions, the number of vacation days is reduced accordingly.

The Principal is empowered to manage budgets, hire teachers, and decide the teacher’s salary. The school’s budget is based on the number of students the school has attracted. The school is allotted a sum of money for teaching each student. Vocational schools are allotted more money than the regular schools and high schools because they need to buy supplies for the school too. For example, the culinary schools have to buy grocery and other supplies for the students, while the schools for electricians need to buy tools for the students to work with. The focus is on language in high school, where students learn English or any other language of their choice from among the languages the school offers.

Students study Bulgarian language and literature, a foreign language, information technology, social sciences, civics, mathematics, culture and sports, music and art, natural sciences and ecology. Students are taught Bulgarian folk dances in school. The timetable accommodates the slot where they learn and practise the art. Most of these dances are performed on festival days and weddings, and the educational system helps to keep the art alive. This is something that we in India should think about. We have so many different forms of dances that are dying. Shouldn’t our system also take pride in keeping them alive instead of having students spend their time and energy only on inane projects? The school I visited had a separate space for the folk dance class, slightly removed from the place where the regular classes are held.

Students have oral, written, and practical examinations throughout the year. The grade system is based on the following:
2: poor/slab
3: fair/sreden
4: good/dobar
5: very good/mnogo dobar
6: excellent/otlichen

In order to pass, students need to secure at least a 3. The above grading system applies to all classes and takes into consideration written and oral skills, class participation, and homework. If a student has poor grades in more than three subjects, the student has to repeat the class.

Students also write external examinations in the fourth, seventh, and twelfth grades. Students of the eighth grade focus intensely on a foreign language and they need to clear a public examination in the subject. The foreign language can be German, Russian, French, or English. The choice is dependent upon the student and also what is being offered in the school. 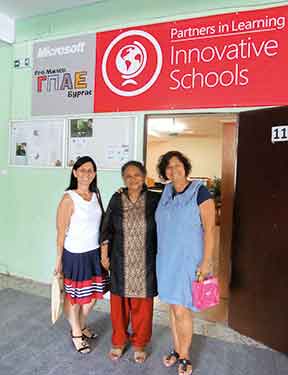 Those who study in vocational schools do an apprenticeship in an industry of their choice. The certificate that the school gives them after the apprenticeship qualifies them as experienced and helps them find a job immediately after graduation.

There are international schools in Bulgaria, particularly in cities like Sofia, Varna, and Plovidv. Here students are taught the Bulgarian curriculum in English; they also have the opportunity to learn Bulgarian. Some of the private schools focus on languages and sport. However, private schools have not mushroomed in Bulgaria, like they have in India, although parents and students have started evincing interest in them.

For students aspiring to study mathematics, there are high schools that focus exclusively on the subject. The Prirodo-Matematicheska Gimnazia school in Burgas and the Sofia Matematicheska Gimnazia in Sofia are examples of such well-known schools. Students are so immersed and well-qualified in the subject that they win many of the international Olympiads in mathematics. Admission to these schools is highly competitive and is based on an entrance examination. The mathematics course is an intense one; while there is the intense curriculum in these schools on the one hand, the math education in the other schools is comparatively poor.

Textbooks need to meet the criteria in terms of price, content, and layout as established by the Ministry of Education and Science. Schools place their orders directly with the 30 plus private and state publishing houses. The schools have reasonable state of the art equipment, but it no way compares to the standards of the UK and the US.

Like Indian students, students in Bulgaria too struggle to speak English. However, they probably face an even more difficult situation; students do not get many opportunities to listen to the language and speak in the language since English is not heard everywhere, unlike in India. Some determined and innovative schools have set aside time for English wherein students visit a language laboratory of sorts and learn to speak English with the help of apps on iPads and with the teacher doing a form of remote monitoring. Students are eager to learn the language since it provides them the opportunity of going abroad for further education, but like Indian students, they too do not relish the idea of consistent hard work in order to learn a language.

“Here’s how I learned English,” narrates Zhenya Karamcheva, a former student of the very same school I visited. “Technically I did start studying the language in first grade, but my knowledge was fairly mediocre until high school. We would have only two lessons, so it was hard to learn it very well. In high school, however, it was different. In the first year of high school, we would have 3 or 4 lessons of English every day. And then after school, we would have another two or three hours of practice. What I liked most about it is that it started from the basics: the alphabet; but it was fast paced. We would sometimes “learn” over 100 new words a day, so we were required to maintain a vocabulary book, with the translation and pronunciation of each word. Then in order to retain the word in our active vocabulary, we had to write out each word at least 50 times, and the teacher would sometimes check that we really did it! In short, it was intense. At the end of the year, we were required to pass both a written and an oral test. The oral test was based on a project, on a topic of our choice, and we had to present it to a group of teachers. Students made diverse presentations based on their interest. I talked about U2, my favourite band; more serious students talked about the history of the English castles and the history of the British court system. We learned a lot from these presentations. After the first year, the curriculum became less intense, but we still had a few more English classes than most schools. I would say I gained 80 percent of my knowledge in English in that first year.”

The teachers I met reinforced the idea that students are the same everywhere… some are interested, some disinterested and some uninterested. Classroom management is sometimes a problem even among the small numbers (25-30 students in a class) where the authority of the teacher is questioned, not in the Indian languages or in English, but in Bulgarian!