In my last article, I talked about Jivakul, a new curriculum concept at Jiva Public School that aims to put students more in control of what and how they learn. Our aim is to create a system of learning that is in line with the Information Age, one where people work anytime and anywhere, and where learning and upgrading one’s knowledge is both a daily and lifelong affair. Here, each student works in a self-paced manner, forging his own learning path – creating a personalized plan, organizing independent and group-based study sessions and selecting from a variety of learning opportunities such as music, art, IT, and so on. 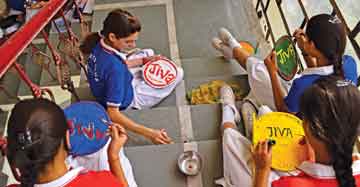 When we left off, the teachers at Jiva Public School had a chance to test the idea out themselves first before trying it with the students. On one Saturday, when there were no students at school, the teachers were provided with a six-hour block of time that they could individually structure – as opposed to following a plan pre-determined by the coordinators. The positive result we experienced gave us the confidence to move forward and take the next step – to introduce Jivakul to the students.

Wanting to ensure a successful implementation, a team of coordinators spent nearly two months preparing for an event that would see 300 children from Classes 8-12 in charge of their own schedules for an entire day. Naturally, we encountered many challenges along the way. One was related to the scheduling of “periods”. While I envisioned having no periods at all, the team felt that this would remove too much structure. So we agreed that we would keep the periods, but would give the children a choice of several activities spread across different blocks of time.

Second, the team felt that too many choices would hamper preparations. So another compromise was made: we would offer only three types of activities – academics, sports, and art. I really wanted an option for the library and computers, but I recognized how much the team was already struggling with the complexities of the task. (Sometimes compromise is necessary if you want progress). 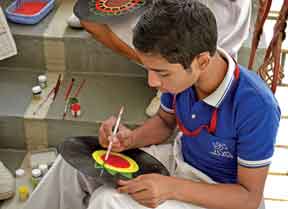 As Jivakul Day approached, announcements were made in the morning assembly, posters were put around the school, and instruction sheets were provided, both for the teachers and the children. Special sign-up locations were created where students could register to take part in the various activities.

While some kids jumped into action and signed up for the activities of their choice, others were slower on the draw. The result was that those who acted quick got their choices, while others found out there were “no seats left” when they got there. And while most of the students were happy as they got their selections, a good number was frustrated. I used it as an opportunity to explain to them that the real world is also like that. If you wait till the last minute to book a plane or train ticket, guess what happens!

Finally, Jivakul day arrived. The students first went to their class periods where they were given a final set of instructions before they set off on their adventure in independent learning. Later they moved to all parts of the school according to their schedules and quickly settled into their activities.

As I eagerly started off on a round, I walked past a group of students engaged in making rangoli designs on the pavement. Most were so engrossed, they didn’t even notice me passing by. I then headed to the classrooms, and as I stepped inside the first one, I found students sitting with their books open studying by themselves. Nothing very eye-catching – something you would see just about anywhere on any day. The only difference was that as I walked around, I found the children studying different topics. However, they were not doing so aimlessly. They were each following learning guides that had been prepared by teachers, which gave them options to revise a topic, study a topic not yet covered, as well as to work alone, in pairs, or groups. And like that, throughout the day, I continued to observe the students engaged in different types of activities: entwined with books and copies or going head to head in games of badminton or basketball. 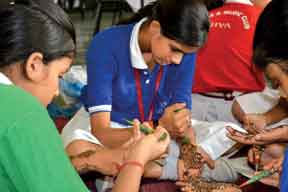 And while I did this, I noticed something unusual about the children’s demeanour: there was a sense of ease on their faces – an air of being relaxed, a calmness, and ease in their body language that one did not see everyday. Mind you, the activities they were performing were essentially similar to the ones they did throughout the year. My belief is that this was due to the students making their own choices. Here, they were not being forced or told what they had to do, but rather were working as per their own preferences. (Not surprisingly, research shows that when you give people autonomy, their self-esteem increases!)

We kept some time at the end for a feedback session where students had an opportunity to share their feelings about their first Jivakul Day. We collected the feedback forms and I poured through them to see what they had to say. We kept it simple, asking only three questions: “What did you like? What did you dislike? and Comment”.

While the positive answers reconfirmed what we had hoped for, it was the negative ones that caught our interest. We then took a few days to find out what might have gone wrong that would have elicited such responses. What we discovered was that the negative comments came primarily from those students who did not get their choice of activities. Very interesting – and hardly surprising!

In the course of our follow-up, we asked the children if we were to do Jivakul Day again, what would make it a success. Their answers were simple: more options of activities and more seats. And that’s precisely what we’ll be doing in our next Jivakul Day at the end of the month – offering 3 additional sports, cooking, computers, a library period, songwriting, dancing, and photography – and making sure that there are enough slots to accommodate as many kids in each activity as possible.

My goal of presenting this case study as I have is to demonstrate the realities of innovation in education – a task that is as challenging as it is rewarding. And one that is very, very necessary. For if we do not evolve from this outmoded factory-style, industrialized system of education, our future will be bleak. Whether it’s a school or a company or even a country – one thing is for certain – that those who try to progress based on what has worked in the past are a dying breed. In fact, Charles Darwin assured us that those who survive are the ones who learn and adapt the most quickly. For us, Jivakul has become the ray of hope in learning – the path to the new paradigm…where the mind is without fear, and the head is held high – and where we shall awake into that heaven of educational freedom.