Recently, I had a chance to engage with a group of eight to ten year-olds in three simultaneous classes.

The children’s involvement in all of these three realms at the same time was not “planned”. Yet, in moving through this time with them, I could see and feel so clearly the stream of connections that ran through these learning spaces.

What I share here is reflections on emerging connectedness, within a particular learning space and across classes.

There are some aspects that were similar in all of these classes. They involved an engagement with the world around us. They involved learning that was based on observation, reflection, continuity, and practice. Together, they allowed children’s questions, exploration, and wonder to flow through the week.

Let me elaborate on some aspects of each of these classes. 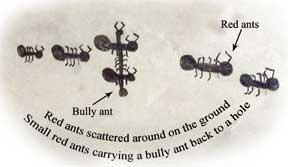 Our Natural World class had a broad scope. As the name suggests, we set out to learn about creatures and features in our immediate landscape. We had a plan for the term, yet our learning course was shaped by themes and interests that arose.

This is the stream that we navigated.

We first did a classificatory exercise, where we made an exhaustive observation-based list of beings and objects around us. We then organized these into groups. The larger groups, Insects, Birds, Rocks fell clearly into place. We asked ourselves why plant and animal creatures fall into smaller groups such as Butterflies and Dragonflies.

There were many thoughts: they move in a similar way; they look alike; they make babies in the same way.

And how about Plant groups? Why would we place some plants into a smaller group? The reasons that arose had mostly to do with how plants look. But what can we say about the many different kinds of plants?

We set out to look at Plant diversity in a very small area, placing small square frames at different spots and noting different plants and their numbers. Our idea was to take our magnifying glasses to plants, to look at features close-up, to note similarities and differences. It had rained and the primitive plants were out. Mosses and Liverworts. We talked about plant features, what the early plants had, what came later.

We had a glimpse of the invisible creatures. We collected pond water and found Alga and Protists (single-celled creatures) under the microscope. A cheek swab revealed tiny specks, bacteria, and a few single, nucleated cells. Before we realized, we had seen a range of creatures, from the earliest to the latest, from bacteria to protists to multicellular organisms.

By now, Can we go out again? was the frequent refrain
Can we watch ants?

So over the rest of the term we were out looking at Ants, Insects and Rocks. 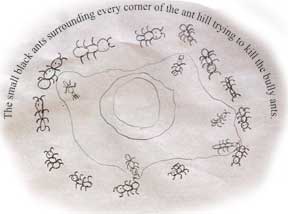 We made “event maps” of Ant behaviour. These depicted what an ant or a group of ants was doing over the course of forty-five minutes. They allowed for multiple, delightful expression.

Two rows of black ants walking in the same direction. Two red ants arrive and try and join a line. We made an Insect map, with a multitude of different insects and notes on “what they were doing”, focusing on movement and feeding.

By now, children began bringing in observations from the weekend to share. One child looked at water-skaters in a pond at her home and kept track of how the numbers changed over the day. Another child, while writing on ant behaviour, described how he had watched a single ant on a window sill. It was looking for food. Or was it trying to go home? We wondered.

We went on to look at rocks and how the features in our landscape came to be.

And so, on to weekly work in the garden and a close engagement with Soil! Gardening involves learning in the Natural World in an almost non-stated fashion. There are clear jobs to be done. In the process of clearing, digging, carrying, shaping beds, mulching, pulling out exotics, a familiarity with physical work happens. With practice, the body is more in tune with certain movements and demands. The children came into the garden with a willingness to do the needful. In this willing frame, many chances to learn from what they encountered arose. Why is some soil lighter coloured? Why is some soil harder? What does mulching do? What are exotic plants, why are we pulling out as many as possible?

Oh, so if we can make mulch with all of this exotic eupatorium, let’s carry it back to the garden. 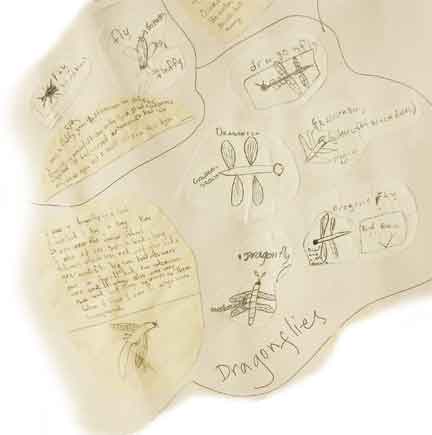 Bugs abound. So too grasshoppers and caterpillars and grubs and earthworms. Here was a good chance to have a close look at forms and colours and patterns. Questions arose, a chance to make connections from what we saw around us during every garden session and beyond.

The Story Project was part of an all-school Project in which groups of students explored the theme of story in a variety of ways. These ten year-olds discussed particular topics of interest about our school life and history that they may want to work on. One was the Living World. Some of our time was spent being out, listening, looking, composing short sequences in which creatures moved, made sounds, sat still. Later, as we worked with short Native American tales, the children truly immersed themselves into the body of an eagle or the wind or a snake and moved to the music of haunting Native American wind instruments.

At the end of the term, we visited the large Classification map we had made earlier. We drew links, in the form of lines, between individuals and groups or between groups which we said were related in any way. Our map soon became a true web of connections.

This came both as a surprise and as a very evident observation.

All agreed that Finally all creatures make the soil and that the soil in turn nourishes all creatures. Creatures and Soil, almost one. A warming thought!

The author works at the Centre For Learning in Bengaluru. She teaches middle school social science and art and grows vegetables with children and is a keen photographer. She can be reached at dibasiddiqi@gmail.com.