It is quite heartening to know that the general perception towards physical activities in schools is changing now. Having done my schooling from a small town in Kerala, my friends and I were the ‘lost generation’ when it came to sports in school. Physical education was never considered a necessity in our school. We had a make-shift playground made by impeding a nearby marsh land. The necessary equipment was also at hand. It was as if the sports infrastructure was in place just to meet some criteria for affiliation. We were taught in class about the necessity of a healthy body for a healthy mind. We even had a two-page essay on the same. But like the election manifesto of politicians, the lessons remained only on paper. There was no period earmarked for PE as there was no physical instructor. Even when there was a physical instructor (PT sir as we used to call), usually an ex-serviceman, he had no clue of what he was supposed to do. Whenever there was a free period, we would occasionally get the chance to go out in the open. So essentially PT period meant that a teacher was absent, no other teachers were free or interested in taking the class and there was no other possible way of engaging us than to let us out in the open. 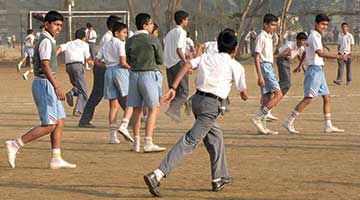 We had to cross many hurdles (bureaucratic hurdles look like a piece of cake) to enjoy the fresh air and the liberty to run around. We used to arrange play dates in our nearby municipal ground on holidays. When the principal came to know about our escapades, we were punished for ‘going rogue’ in search of a healthy body. The common belief among the pedagogy then was that the academic performance has nothing to do with physical activities. It in fact acted as an impediment to a good academic performance. But, for us the occasional game of football or cricket was an escape from the boring lectures and the pressure of scoring good grades.

Now, of course, perceptions have changed. Extra-curricular activities are given importance on par with academics. The importance given to sports at school has produced some great sportspersons. Apart from the physical aspects of sports, the virtues a child learns like sportsman spirit, reacting to failure in the right spirit and developing an attitude that would keep him in good stead for his life cannot be over emphasized.

Now, however, there is the risk of over indulgence in sports and putting academics on the backburner. It is essential to find a middle ground. The role of teachers in finding this middle ground is important. Let kids run out in the open, take in a breath of fresh air (which is readily depleting) and if they fall down, let them pick themselves up, dust off and keep running. That is what we are trying to do through the system of education. To make kids stay on their feet.

The author is a freelance writer and a graduate from the College of Engineering, Chengannur in Kerala. He blogs at http://kirangandhiblog.wordpress.com/.