Most math students know the following:

Pythagoras theorem
If there is a right triangle, the sum of the squares of the lengths of the two sides will equal the square of the length of the hypotenuse, which is the longest side of the triangle.

In fact, this applies to any three numbers a, b, and c that satisfy this condition. Hence, a2 + b2 = c2, will form a right triangle with ‘c’ as the hypotenuse.

See how the Pythagoras theorem helps you solve this problem! 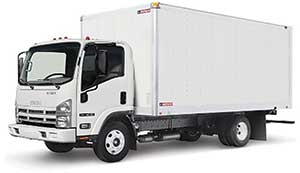 But why does the theorem work?
The theorem was known to the Babylonians, Chinese, and Indians long before Pythagoras. Pythagoras did not discover it, he only proved it!

Many proofs exist for this theorem. The simplest proof is shown below. 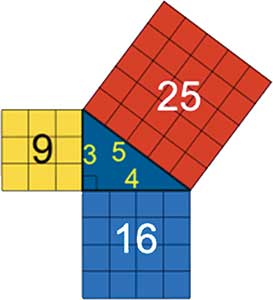 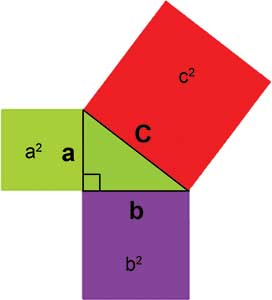 According to Pythagoras, this is the relation between the areas.

Several other proofs can be checked from the website http://www.cut-the-knot.com/pythagoras/

Pythagoras triples
Such three numbers a, b, and c are called Pythagorean triples. The smallest triple is [3, 4, 5]. It is very easy to get more triples by scaling up these numbers. If [a, b, c] is a Pythagorean triple, so is any triple obtained by multiplying all numbers of the triple.

Check the Pythagorean triples given below, scaled using a basic triple

Look at them carefully. Do you notice that in a triple either:
a. All three numbers are even? or
b. Two are odd and one is even?

These are the only two combinations possible. A Pythagorean triple can never be made of three odd numbers or two even numbers and one odd! 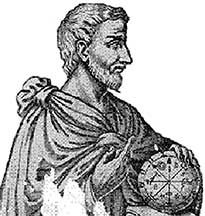 Who was Pythagoras?
Pythagoras was a Greek philosopher who lived between 580 BC and 500 BC. He made significant contributions to mathematics, astronomy, and the theory of music. He spent much of his life studying mathematics and built a special school, the Pythagoras Society, whose members followed strict rules. He believed that everything in the world could be explained by numbers. He identified numbers as male or female, ugly or beautiful, or had a special meaning attached to every number.

He also studied shapes and was interested in triangles. One theorem they worked on is this famous one:
The sum of the angles of a triangle is equal to two right angles or 1802.

This means that if you take any triangle, tear off the corners and fit them together on a line, you will make a straight line (that is the same as two right-angles or 180°).

As we can see, Pythagoras contributed a lot more to mathematics than just the Pythagoras theorem. 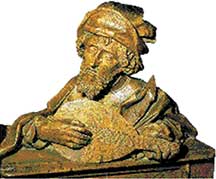 However, Pythagoras worked with the members of the Society he formed and therefore it is difficult to decide whether all the ideas attributed to Pythagoras are really his. The Society was always secretive about its work and individuals were never given credit. All of the Society’s findings were credited always to Pythagoras.

Pythagoras also related music to mathematics. He had long played the seven string lyre, and discovered musical harmony on his own.

There are many different stories around Pythagoras’ death.
• Killed by an angry mob
• Caught up in a war between Agrigentum and Syracusans
• Killed by the Syracusans
• Thrown out of his school, he went to Metapontum where he starved to death;
• Refused to trample a crop of bean plants in order to escape and was caught.

Whatever the reason for his death, Pythagoras lives on through the Pythagorean theorem. For this is a cornerstone of mathematics. It continues to fascinate mathematicians. There are more than 400 different proofs of the theorem so far!