Pallikoodam was founded as ‘Corpus Christi’ in 1968 by Mary Roy. Mary Roy is well known in Kerala civil society as the fiery lady who challenged and helped absolve the Travancore Succession Act of 1916 by which Christian women in Kerala were denied ‘Equal Rights of Inheritance’.

Mary Roy talks about what inspired her to start Corpus Christi on the school website: “My son was a happy seven year old at Lushington School, Ooty. Unfortunately, he began to identify himself as being British. He talked about ‘those Indian children’. I realized it was time for him to go to an Indian school. The first day he came home carrying a bag with 16 notebooks and 10 textbooks and wept! This was my first glimpse of what was wrong with education in India.”

Mrs. Roy started operating with seven students at a hall leased by the Rotary Club of Kottayam. When the numbers grew, they shifted to the current location at Vadavathoor which was completely barren at that time. Today, the lush green campus is a sight to behold. The multi- layered architecture designed by the prodigious Laurie Baker is costeffective, environment friendly and immensely beautiful. Umpteen varieties of trees, all neatly labeled with their common names (in English and Malayalam) and botanical names, grace the campus. In the words of June Jose, Vice Principal, they have all been planted by Mrs. Roy herself or by a bird! Unlike most concrete jungle school campuses, the only two colours in the landscape of Pallikoodam are brown and green – that of earth and nature. The splash of colours from children’s creativity, of course, does grace the walls.

New name, old values
Mrs. Roy asserted her allegiance to her roots by changing the English name ‘Corpus Christi’ to Pallikoodam (Malayalam for ‘school’) in 2000. She also wanted to do away with the Christian tag that the former name had. The same year, the school introduced Malayalam medium in nursery, Std. I and II.

“Malayalis have great adaptability. But the dangerous aspect of this nature is that we quickly give up on our roots and end up giving a step-motherly treatment to our own inheritance. With Pallikoodam, Mrs. Roy wanted to break away from our colonial influence and revive Malayali culture in school education,” says June. That is precisely why students here greet their teachers with a ‘Namaskaram’ rather than a ‘Good Morning Teacher’. They also refer to the older teachers as ‘Kochamma’ and the younger ones as ‘Chechi’ – ‘Miss’ and ‘Ma’am’ are banned!

That does not mean their growth is restricted by the shackles of regionalism. Rooted strongly to their mother tongue and native culture, they just grow up to become stronger trees with widespread branches. The school is proud of its alumni which has many global citizens as members. Booker Prize winner Arundhati Roy, Mrs. Roy’s daughter and one of the first students of the school, is just one among them.

Until recently, the school struggled to overcome the “expensive” tag. With no association with any organization – religious or otherwise – the only income for the management comes from students’ fees. One look at a campus with expanding land area and first class facilities makes it clear where the money is spent – in developing students’ learning environment. “We have had cases of children whose families went through financial crisis much after they joined. We immediately put them on scholarship. Money has never been and will never be a constraint for education here,” clarifies June.

On a different learning path


Although it is an ICSE affiliated school, Pallikoodam puts to use the council policy that only the board examinations in Std. X and Std. XII need be strictly adhered to. The process of preparing the students with skills necessary for those examinations is entirely up to the schools. While most schools take the easy way out by simply reading out from text books, Pallikoodam does it differently. “We follow the council syllabus only from Std. IX. Until then, teachers take a call on what needs to be taught. We refer multiple textbooks and resources to prepare course material and worksheets. Students study only from their lecture notes and these worksheets; there are no textbooks for them,” says Shylaja Ranjit, a senior teacher who teaches physics.

An informal group teaching mode is adopted until Std. IV. Children in each class are divided into groups. Activities related to different subjects are allotted to each group and thus multiple subject classes go on simultaneously. Even if a child is slower than the rest in the group, he/she can continue working on his/her subject while the others move on to the next one. This method calls for a greater amount of preparation on the part of teachers than the conventional lecture method.

The practice of ‘free writing’ is encouraged as well. English is introduced in Std. III through the phonetic method, emphasizing the spoken rather than the written word. After learning English sounds, they are made to spell words on their own. Given the anomaly in English spellings, they often make mistakes. The teachers, however, do not mark the mistakes in red or correct them. With the extensive reading they are made to do from then on, they eventually get a grip on correct spellings naturally.

There are no annual examinations until Std. VII. Assessment is a continuous process and tests are conducted regularly to analyze students’ understanding of the subject. Children get only grades for these tests, not marks. However, in Std. VIII, the first two terms end with tests-with-marks as a preparation for their first annual examination. Even then, there is no system of declaring ‘ranks’. “The ISC topper may be from Pallikoodam, but it is not news that is shared or celebrated publicly,” says Shylaja. The school just does not recognize that the score in an exam is an indicator of anything at all.

There is no detention until Std. IX either as the school firmly believes that there is no problem child. “All children, by themselves, are brilliant. If there is a problem, it is elsewhere. It is our duty to identify that and give remedial help. There is no need to make a child lose an entire academic year,” explains June. With less than 450 students (including nursery and plus two), the average number of students per class is 35. There are no divisions. This gives ample room for teachers to understand each student – their strengths and weaknesses.

Leela Gopikrishnan, whose kids went to Pallikoodam, says, “There was an instance when my son had just scored well in an exam and I was asked to meet his class teacher. Instead of a compliment, she shared her concern over his carelessness. I was pretty impressed with the observations she had made before she told me this. Despite being his mother, I hadn’t noticed them!” Pallikoodam has a policy of not allowing students to live with any relative, but parents. If neither parent is in town, residential schooling is compulsory.

Parents are also strictly instructed not to arrange private tuitions for their children. The school understands that burdening kids with knowledge twice over is not a good idea. Also, there is every chance that children with help from outside the school won’t pay enough attention in school classes. An exception is made only for students who take up entrance coaching classes in Std. XI and XII.

Despite the economic meltdown and the pink slip aftermath, most Malayali parents still prefer that their children take up engineering and medicine. Schools also take pride in manufacturing engineer and doctor material and many of them, especially in the private sector, cooperate by providing entrance coaching after school hours. Pallikoodam begs to differ. June says, “We emphasize to every parent who comes here for admission that if you want your child to be a doctor or engineer only, this is not the right place.” From Std. VIII, students start receiving group and individual career counselling from experts who conduct tests to explore their aptitude.

The school believes in giving children all possible opportunities and helping them make the right choice. Swimming, drama, yoga, cooking, sewing and physical education are part of the curriculum and therefore non-negotiable. In addition, they can choose a minimum of two extracurricular activities from the options provided by the school, which includes kathakali, bharatanatyam, karate and music. If students are interested in something else, they are also encouraged to find and bring tutors to the school. Interaction with stalwart artists happens regularly so that students have high standards of reference when it comes to achievement.

The equal importance given to extracurricular activities, says Shylaja, is what makes Pallikoodam different – so much so that they cannot be called extracurricular any more, they are very much a part of the curriculum! When most schools relax extracurricular involvement of Std. X and Std. XII students, Pallikoodam makes it work as a stress buster for them to face the board examination calmly.

The school also focuses on helping children grow as team players. Most of the graded activities are group efforts throwing the concept of individual competition out of the window. Every class does a theme assembly once a year which is an out and out group effort: participation from every student in the class is mandatory. This is also an opportunity for the class teacher to gauge the interests of her students. Regular assemblies happen every week in which teachers are not involved in any other way than attending them. There is no system of assembling and dispersing in lines as well. Discipline, the school believes, is something that must be silently inculcated as a way of life. 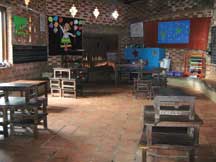 Establishing discipline differently wasn’t easy for Mrs. Roy when she started out. There were vehement protests from conservative parents of the small town Kottayam when she introduced swimming classes for boys and girls together. She showed the same grit that she had put to use at the Kerala High Court and had it her way. Leela remembers how Mrs. Roy had once brought a Jazz musician from Mumbai to ‘jazz up’ the interactions of boys and girls when she felt they were inhibited. As unconventional as it sounds, the underlying principle is just that children nurtured in an uninhibited environment become more responsible social beings.

This is exactly what reflects in Bala Bhu Bhadratha, an environmental organization started by the students of Pallikoodam. Their major project is solid waste management and implementation of Municipal Wastes Management and Handling Rules, 2000, in Kottayam. As a part of this project, they give composting units for bio degradable waste to every student’s family. The Citizen’s Action Forum is another group that functions from the school that takes up any issue related to Kottayam.

This school’s success illustrates how we need to be the change that we want to see. Many of us smiled in agreement when Aamir Khan preached jovially in the film, 3 Idiots, about the loopholes in our education system. And then, we moved on with the same old carrot and stick policy. Maybe there is a better way!

The author is a freelance writer and has a Masters in Communication from Sarojini Naidu School of Arts & Communication, University of Hyderabad. She can be reached at [email protected].