“He is made to be a mathematician.” “She is a saint.” “This boy is artistic, but fickle. He can’t help it.” We say these things often about people around us, and we are not merely labelling them, we are identifying their nature by considering some ways of thinking and behaving as essential to them. ‘Their character’ is a simpler and polite term. The term is disconcerting because it has a sense of permanence to it. Habits can go away, but character remains. Occasionally, our responses in some particular situations might be different from our usual habit, but our character remains the same…so we think.

Teaching and learning essentially means the transformation of learners’ minds. When we teach moral education, mathematics, history or any subject, we aim to develop habits of thinking. We expect minds to transform in a way that when people face a moral situation they decide what is the right thing to do, and do the right thing that has been established by the external principle. Similarly, we expect them to think mathematically when required, historicize when needed.

But the idea of the formation of character that is permanent makes such transformation impossible. From a curriculum like this, at best learners will accept the principle or maxim given to them, verbalize them when required, but it may not amount to the formation of moral character.

The way our brain and mind are formed, causes us to think in certain ways. At the same time, our mind is formed by the way we think. It is a two-way process. Early childhood learning is based on this thesis, and we see it working. When young children engage in games that involve working on language, mathematics and/or morality, it helps them exercise their mind and develop habits of thinking that will eventually support formal education later when they go to school. It works the same as physical exercise which strengthens some muscles, and forms our body in a certain way.

While habit means repetition of the same act with no control over it – when it comes to thinking we repeat a certain way of thinking – not just a particular act. Suppose we have many experiences in early life, where most people who helped us also expected something in return. This could lead us into believing that relationships are essentially transactional. People give something and get something in return. If this form of thinking becomes a habit, it is difficult, if not impossible, for us to consider that some acts of help could be purely altruistic.

Voluntarily creating our character
But both these causes, biology and our experiences, seem to indicate that the formation of character depends on other people and circumstances. Does that mean we do not have any role to play in the formation of our character? Harry Frankfurt (American philosopher) says something very important in relation to the formation of habits of thinking and character. The essential characteristic of our mind is that it can self-objectify. By self-objectification he means that our mind divides itself, and observes the thoughts going on within. Our minds are structured in a way that this is what we do all the time. In fact, we cannot help but do this.

We only have to close our eyes for a few moments and we see thoughts crowding in our mind. We like some, we hate others, we are scared of some; it is a melange of thoughts that Frankfurt calls “psychic raw material”. Our mind’s structure makes it possible for us to observe it constantly, and to judge the thoughts that teem it. We observe the psychic raw material, judge it, ascertain what we feel about it and then process it. This informs the way we think and the way we act. This is how habits of thinking are formed, Frankfurt says.

A friend was once telling me how hard he worked on overcoming stage fear. Others would tease him and make fun of him seeing that he was nervous. Initially many thoughts, mostly related to fear and embarrassment, used to crowd his mind whenever he considered speaking in public. He used to try to fight it down by pretending he was not afraid, because he did not want to be seen as being afraid by others. That did not work. The stage fear did not go away. He then started observing those thoughts and accepting the associated fear. He would go on the stage, let the nervousness show itself, even talk or joke about it. Gradually he became comfortable with the nervousness, and this comfort decreased the nervousness substantially. Continuous practice of standing on stage eventually made the fear disappear when he was on stage. This was a voluntary act, since he managed his thoughts and behaviour himself.

This narrative helps us realize that change in his habit of thinking was voluntary, and it was also directed by purpose. The purpose influences the way we judge a thought that comes into our mind. His purpose was to become someone who is not afraid of speaking on stage. That is why he dealt with the stage fear and nervousness the way he did. Others could have chosen to accept stage fear and not to go on stage. But purposes are not so simple. If we want to overcome stage fear because we are scared that others will ridicule us, the habit will take one form. If we do it because we enjoy being on stage, our character will be different. If we want to demonstrate how intelligent we are, we could become arrogant. Our purpose contributes to subtler and finer aspects of our character. These subtler aspects retain a connection of our character with our life experiences and particularities of the circumstances we live in. 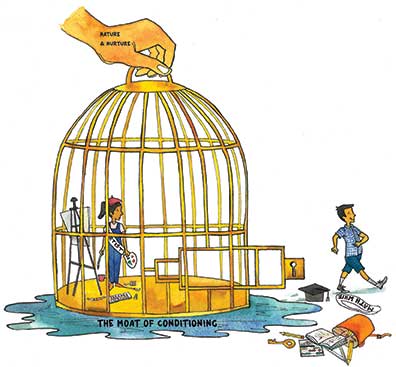 “Even if we did cause ourselves to have certain inclinations and tendencies, we can decisively rid ourselves of any responsibility for their continuation by renouncing them and struggling conscientiously to prevent them from affecting our conduct.” – Frankfurt

That is what my friend was doing with stage fear. He made a choice and transcended immediate circumstances and the fear he felt. He managed his habit of thinking and changed it. He demonstrated responsibility for his character in the way Frankfurt describes responsibility. This came from a voluntary response to immediate circumstances, rather than from a principle or maxim given to him by someone else.

Implications on moral education
This way of thinking about the formation and change in character (habits of thinking) have significant implications on moral education. It opens up the possibility to develop moral education curriculum so as to locate it in certain situations and practices, rather than through text with principles like “Cleanliness is godliness” or “Do not let kindness and truth leave you.” Unless these maxims are derived from actual situations, they will be empty words. Virtues have to be developed through a direct engagement with situations and getting learners to exercise critically reflective personal responses. The teacher’s role would then be to nudge children to pause in their thinking, by asking the questions that lead them to observe their mental response and judge what habit of thinking they would want to produce. Hence what character they would want to develop. This would ground education in real circumstances, within prevailing social situations and practices.

There will also be some situations when personal reflection will not be enough, especially when we are engaging with social norms and traditions that have been prevalent for long. Learners will then have to reach out to knowledge developed by others over centuries. The basic habit of personal reflective response will remain, but it will be scaffolded with a lot of theoretical reasoning and new or revised principles. That will be the next stage of the curriculum.