Know Your English by Professor S Upendran is not only useful and fun to read, it is also a book that will help its reader communicate clearly and elegantly. This little book gets its title from the very interesting choice of ‘idioms and everyday expressions ‘ that have featured in the author’s column in The Hindu, also called ‘Know Your English’. It contains a large and exhaustive collection of idioms backed by examples that are illustrative and easy to understand, particularly for second language learners of English. The author enlivens our interest in the common, not-so-common and downright ‘peculiar’ idioms that are part of this complex language called English. He does this by throwing in the history behind most idioms and by explaining their current usage in connection to their origin. Teachers and learners of English as well as those interested in the finer nuances of the language would do well to get a copy of this book. 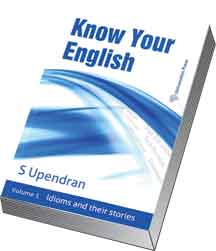 The list of idioms has been arranged alphabetically and covers a wide range. For those who are new to the language it would be helpful indeed to know that the commonplace ‘going back to square one’ does not mean counting squares, but to go back to the beginning and to start all over again. The not so well-read reader might be foxed (to use another idiom) by the almost unknown and forgotten ‘to live the life of Riley’ until he learns that it means ‘to live a comfortable life’. The author’s examples and his account of the origin of this idiom help in understanding and using it with ease. Particularly interesting to me are idioms like ‘to give someone the bird’. I ,for one, must humbly admit that I was unaware that the origin of hissing a performer off stage lies in the hissing sound made by a goose, nor did I know that booing a bad performance could be colourfully called ‘giving someone the bird’.

Just browsing the stories behind idioms and their usage is an education in itself. Many of us are, I am sure, familiar with the usage of ‘to give a cold shoulder’. How many of us, however, would know that ’centuries ago this portion of mutton was usually given to the servants of the household’ and that a guest who had overstayed his welcome was often given a cold serving of the shoulder as a broad hint that he was unwelcome. My favourite story is a marvellous one that invites you to give careful consideration to the meaning of what you are saying. To illustrate my point I find that I must quote the author for his clear and vivid story behind the origin of the idiom ‘to blackball’, which means to vote against someone joining a club.

‘The expression goes back to a practice that was followed in Greece. Admission to a club/society was determined by a secret vote by all the members concerned. Each member of the club had to drop a round pebble into a box: he had to choose either a white pebble or a black pebble. When all the members had cast their vote, the box was emptied of the pebbles. If there was even one black pebble among them, the applicant was denied admission. The members had blackballed him.’

Of particular interest to teachers of English literature might be the many idioms that the author has included which owe their origin to Greek and Roman myths and indeed to stories from English folklore and history. For instance, the idiom ‘to cleanse the Augean stables’ is based on the story that Hercules was given the task of cleaning the mammoth stables of King Augeas of Elis. These stables had not been cleaned in thirty years – a Herculean task – if I may say so. Did you know that the common and humble idiom which states ’there is many a slip between the cup and the lip’ originates in the legend of Ancaus, son of Neptune and his fatal encounter with a boar, that prevented him from tasting wine that had been poured out for him to taste? ‘Barkis is willing’, as the author explains, first appeared in Dickens’ classic ‘David Copperfield’ and ‘to be in the doghouse’ might have originated from the well-known children’s novel ‘Peter Pan’.

Teachers of English will find it heartening to see the lucid and easy manner in which Professor Upendran has dealt with the aspect of pronunciation. Instead of using a complex method that the lay person would find difficult to understand, he has opted to break up complicated words into syllables and simply compare these to commonly used words and sounds. An excellent example would be of the idiom ‘to steer between Scylla and Charybdis’ The author advises the reader to pronounce ‘scy’ as in ‘sit’ or ‘sip’ and the final ‘a’ as in ‘china’. The ‘ch’ in ‘charybdis’ is pronounced like the ‘k’ in ‘kit , the ‘a’ as in ‘china’ while the ‘y’ and ‘i’ are like the ‘i’ in ‘kit’. The name is pronounced ke-RiB-dis, with the stress on the second syllable.

While the list of idioms is indeed impressive and methodically presented, I wonder if it would have been more helpful if the idioms had been classified differently. Perhaps lists of animal idioms, food idioms, idioms of literary origin, clothes idioms, etc., might have caught the fancy of the more general reader and not only of those keen to speak correctly, elegantly and well, as well as of those who wish to teach English in an interesting and comprehensive manner.

I am sure there exist many other guides to idioms and their usage, but this is a must for all those who care for the state of the language. It is pocket sized, ideal for having on hand at all times. I would thoroughly recommend this book and propose that readers dip into it frequently. They will be educated, amused, and delighted.

The reviewer is a teacher in Vidyaranya School, Hyderabad. She can be reached at [email protected].