Phrases like awareness, de-conditioning, openness, responsibility, integrity, ‘seeing things as they are’, ‘out of the box thinking’ are commonly used these days. Mahatma Gandhi hardly used these terms but if one reads him one cannot but observe that he was a living example of all these phrases.

Because of these innate qualities he developed a deep and intuitive understanding of the fundamental principles of nature and human life. It is apparent that he had deep faith in Indian civilizational values, not because of patriotism, but because he saw an alignment between these (values) and a (social) order where human beings can coexist in harmony with nature and with each other. He had deep respect for the ordinary, non-literate (but educated) Indian. He found this basic goodness, sensitivity and ability to see things as they are, missing in the ‘educated’ class. This difference between the ‘educated’ and non-literate made him think deeply about education. 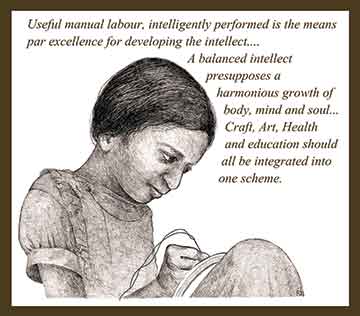 There is an interesting anecdote which not only reveals his incisive perception but also his ability to get to the heart of the matter and take a radically different approach from those stuck in the peripheral. On the way to meet the Rajah of Travancore, he observes a farmer tilling his field. He stops the car and strikes a conversation with the farmer asking him, ‘who is your King?’ The farmer gets up, puts down his tools and raises his hands and face to the sky and says, “Who cares? The real King is up there (meaning the Almighty).” Mahatma is elated upon hearing this reply. What strikes him is that if the ordinary Indian is not concerned with his King and is only concerned about the Almighty, then he has the potential to be fearless of all mortals; that he has innate sense of ethics and is an ideal citizen who has all the qualities to live in harmony with nature and with other human beings which is the ultimate goal of any civilized society. This encourages him and reinforces his faith in the ordinary Indian. Now imagine if one of us, the modern educated person, had heard this reply, what would strike us? That the farmer is ignorant of even the basic knowledge (actually information) and so he should be educated!

Even before ‘Buniyadi Shiksha’ (or nai talim) was formally launched in 1937 ‘shiksha’ (education) was of deep concern to Gandhi, right from his days in South Africa. In 1931 in London during the Second Round Table conference, he said on one occasion, “I say without fear of my figures being challenged….. that today India is more illiterate than it was 50 or 100 years ago, …..because the British administrators, when they came to India, instead of taking hold of things as they were, began to root them out. They scratched the soil and began to look at the root and left the root like that, and the beautiful tree perished….”

He felt strongly about the deep sense of alienation between what was our own (language, various attributes of lifestyle like the dress, the manners, the way of behaving and conducting oneself, our knowledge systems, value systems) and those represented by the school. The school started representing a different code and value system which was alien to what was ours and this created a chasm, bringing with it a sense of inferiority towards whatever was indigenous. The consequence was that we started mindlessly imbibing and imitating what we (unconsciously) assumed to be superior. He repeatedly referred to this problem among the educated, comparing them to blotting paper which indiscriminately soaks. Through his efforts in education, this is essentially what he was constantly trying to address. He tried to make India fearless and implored Indians to have the courage to say ‘no’ if they did not agree.

Mahatma Gandhi, while emphasizing on the purity of means, makes a sharp distinction between means and end. For him, learning, self-confidence, self-esteem, fearlessness, self-reliance, freedom (swa-tantra-ta and swa-raj; self-organized and having control over our needs), co-operation, responsibility, sensitivity are the ends and all subjects and learning are a means towards that end. Therefore his effort in education is at integration (of subjects and concepts) in all aspects of life particularly in the teaching-learning process.

All learning is about understanding, knowing the truth (about oneself and everything around) and finally experiencing the truth so that an individual is able to lead a meaningful life, living in harmony, within and without. So it is clear that the object of learning is oneself and all objects that one is surrounded by. Subjects are categories created by human beings as a means to understand. They, the subjects and textbooks, are for our convenience and not an end in themselves. But in present-day education, confusion prevails because of which subjects have been over-valued and object (of learning) has been down-graded. Gandhiji tried to put this back on rail. The attempt in Buniyadi Shiksha was to lay stress on local crafts (the object of learning) and weave different subjects in that process while giving respect to manual labour, to local crafts and ensure material self sufficiency. While learning a craft many things get integrated naturally – subjects as well as values. Values and subjects need not be taught separately at least at the junior level. 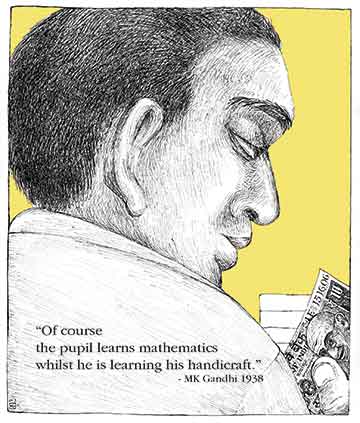 He had a vision for the future of India but also an acute sense of India’s past. Till as late as 1750, India was producing 24-30 per cent of the world’s manufacturing (non-agricultural produce) output. This huge production was not done in large factories but by millions of self-reliant craftsmen, mostly belonging to the so called lower castes. During colonial times, the biggest blow was to Indian manufacturing and the pillars of Indian economy, the craftsmen, took a huge beating. Moreover an artificial divide got created between arts/artists and crafts/craftsmen. Art got elevated and crafts got degraded and along with it also the people who belonged to the craftsmen community. There was never such a sharp distinction between arts and crafts in India. Craftsmen were also artists and commanded respect in society. Mahatma Gandhi, through Buniyadi Shiksha, was also trying to address this issue by giving highest respect to crafts. Gandhiji’s opposition to large industry and modern technology has to be seen in this light too.

Mahatma Gandhi was not against technology but against (modern) technology which dis-empowers the ordinary man. He was a great admirer of the simplicity, beauty and efficiency of local traditional technology which was completely in the hands of the local community – from making of the tools, repairing the tools and innovations in technology and production – all were in the hands of those making use of the tools unlike modern technology which has created a large distance between the users and producers of technology and tools. Consumers and users of modern technology are completely alienated from the manufacturers, the large corporations. Mahatma Gandhi saw integration at a much larger plane and was wary of fragmentation at all levels. Unfortunately, Mahatma Gandhi has been highly misunderstood. As Mira Behen, an ardent follower and admirer once described him, “Gandhi was all fire.”His staunch beliefs in non-violence and ‘sarv-dharmsambhaav’ (equality of all religions) have been largely misunderstood and have turned his public image into a soft and frail kind of a person. What is understood by secularism today is very different from Mahatma Gandhi’s idea of ‘sarva-dharma sambhaav’. He was deeply rooted in his religion while having respect for other faiths. In a gathering of teachers he exhorted them to produce a rebel in every home who dared to challenge even one’s parents like Prahlad (whom he describes as the first rebel in Indian mythology), who challenged his father, Hiranyakashipu, for the sake of truth. While recognizing the utility of provisional truth, Gandhiji gave priority to definitive truth, a distinction hardly made in present day education where confusion prevails between truth and fact; meaning and word; between dharma and religion; between swatantrata and freedom.

Most of the educated in our country think they know Mahatma Gandhi but their idea of Mahatma is based on hearsay. Hardly anyone has taken the trouble to read him. But if there was a way to make teachers and students read and deliberate on what he had to say keeping in view the context of the times, it would lead to an opening of the minds, encouraging us to think originally and creatively. In particular, what could be very useful are his speeches in the four of five years after returning to India, between 1916-1920 and his seminal work Hind Swaraj. Mahatma Gandhi cannot be understood in a fragmented manner; if one were to understand his thoughts on education, one will need to understand his beliefs on religion, politics, economics, technology, swaraj, and swatantrata too.

The author is founding director of Sidh. He is interested in education, society, traditional knowledge systems and self inquiry. He can be reached at pawansidh@gmail.com.