If you work in a school as a teacher or administrator, you will surely recognize the power of teams. When a task needs to be accomplished, a group of dedicated, cooperative people can not only achieve the goal, but in doing so generate a feeling of camaraderie that spreads goodwill among the students and other staff members. Any principal or headmistress will attest to the fact that having teams is critical to their success as leaders as well to the overall success of the school, especially as the school grows and the number of tasks grows along with it.

In this article, I explore the concept of effective teams of teachers, and explain the method we have used at Jiva Public School to engage our staff in ways that have energized them and enabled them to attain excellence in their work. 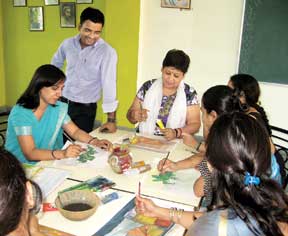 Why did we turn to teams?
It all started a number of years ago, when I spoke to our principal, Mrs. Chander Lata Chauhan about the decorations in the school – things like posters, bulletin boards, classroom walls, and other display areas. I felt as though there was not enough life in them and I wanted to know what more could be done to make the environment look more vibrant. When I made an appeal to have more and better artwork, Mrs. Chauhan told me that the teachers were already overburdened with so many other tasks that it would not be easy to increase the amount, quality, or frequency of change in our decorations.

Eager to see our school looking more aesthetically pleasing, I did a bit of investigation to find out what could be done to solve the problem. The first bottleneck I discovered was that each teacher was responsible for producing the charts and posters in her own classroom. While I’m all for people being self-reliant, it is true that not every teacher is creative nor good at artwork. And she could surely benefit from some help from others who are naturally good at it.

The second bottleneck I pinpointed was that apart from classrooms, all design work for the rest of the school was being done by a handful of teachers in our art department. So yes, they were undoubtedly overburdened.

I continued to explore other aspects of the school, and found both types of bottlenecks recurring in the morning assembly, the organizing of holiday events, school productions, career counselling, and so on. In almost every case, teachers were assigned duties that did not align with their inherent strengths. And further, work was typically delegated to limited groups of teachers; the lion’s share of the responsibilities were diverted from teachers believed to be less-motivated, and assigned to a handful that was deemed to be highly dedicated.

When it comes to work and motivation, my view is that each person has innate strengths, and if you figure them out and give him a task according to those qualities, he will not only enjoy doing it, but will do it quickly and efficiently. In the process, he will become more motivated, and energized – and even energizing, that is, he will stimulate others around him through his own enthusiasm. You can then take this a step further by creating groups of like-minded individuals, and assigning them to tasks.

Doing so produces a whole that is much greater than the sum of its parts.

The result of this investigation led us to create teams of like-minded (and similarly-abled) teachers.

Creating teams
The first place we began in creating teams was to look at the type of activities that were going on in our school. Apart from regular classroom and teaching activities, these included things like exam duties, gate duty, and club duties. We then looked at other activities that happened in the school where teachers played a role, but were not formally assigned to them. This included welcoming and tending to guests, involvement in greening the school, creating and issuing press releases, producing our annual magazine and website, and even things as simple as taking photos and videos of various events.

We then identified special teams that could look into the various activities, such as a visual team (for decorating the school), a hospitality team (for greeting and taking care of special guests), a morning assembly team, an escort team (for ushering students and guests), a cleanliness team, an environment team, an event team, a career guidance team, a disaster management team, and so on.

Manning the teams through RPRP (Right Person, Right Place)
After we decided on our set of teams, the next challenge was to achieve what I call “RPRP”, or in other words, getting the “right people into the right place”. For this, we took a clue from Multiple Intelligences (MI) and Multiple Natures (MN) – two sets of personality traits that are valuable in mapping people to tasks. Multiple Intelligences specifies eight abilities: bodily, interpersonal, logical, linguistic, visual, musical, intrapersonal, and naturalistic. The other set, MN, identifies nine tendencies of people, namely: protective, educative, administrative, creative, healing, entertaining, providing, entrepreneurial, and adventurous.

So for instance, when setting up the visual team, we looked for teachers with strong visual intelligence and a creative nature. For the hospitality team, we identified those who possessed a strong interpersonal intelligence and providing nature. And for disaster management, a dominant bodily intelligence coupled with protective administrative, and adventurous natures.

It just works
Using this approach, we have found that when we have used the RPRP and MI-MN concepts, teams largely manage and maintain themselves. The teachers function well together, work prolifically, and rarely complain about being over-burdened.

I can understand why those with a more authoritarian or centralized approach to leadership might find it difficult to imagine how self-regulating groups could be effective and efficient without constant supervision and direction. However, our experience shows that teams assembled in this way figure out what they want to do in a manner that resonates with our vision. The more we try to organize them, the more dependent and inefficient they become.

Even kids can join in on the fun!
Finally, I have to mention that teams are not just for teachers. We have also involved students in just about every team we have created. Not only does it bring in extra brains and hands to get the work accomplished, it enables students to engage abilities that are not normally or frequently utilized in the school context. Further, it provides students with the opportunity to work not just under teachers, but alongside them as well. Besides building stronger relationships, collaboration offers students insights into learning about values and skills in a way that is only possible in a master/apprentice relationship.

The result of well-planned teams
In short, I have presented a model of teams and team building that can significantly alter the levels of motivation and effi ciency in a school. It simply boils down to two basic steps: a) identifying teams that address the key needs of a school, and b) using the multiple intelligences and multiple natures to attain RPRP. By doing so, we at Jiva Public School have been able to see an increase in innovation and productivity – and even in “presenteeism”, with more people wanting to be around school because of the opportunities it provides. With the demands of the industry for individuals with greater teamwork skills, and with the need for schools to increase the range and quantity of activities offered, it stands to reason that in the future, the concept of teamwork using RPRP might become a critical part of every school’s success.