The reference to the recent internet phenomenon in the title may be irksome to a few, for a variety of reasons. But Kolaveri di is symptomatic of something quite significant. A feature of English in India that is most often overlooked and taken for granted is the way it has reacted with the indigenous languages and resulted in mutant varieties like Hinglish (English+Hindi), Bengalish (English+Bengali), Tamlish (English+Tamil) and several others as well. It is a feature that teachers and in particular, English teachers are always uncomfortable with and try to weed out at every instance. But much like weed, it is resilient – and teachers as well may find themselves saying things like: “So get your books, na!” or “His fundas in math are absolutely clear!” or “He is a pukkabadmash!” or “Don’t make bahanas”, and so on. 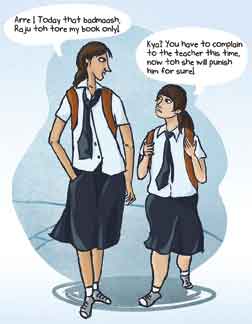 English is given the venerated status of lingua franca in India – a country linguistically divided. However, very often it is not English that serves as the lingua franca, but Hinglish, Tamlish or Bengalish. This is referred to as code-mixing, i.e., the mixing of two or more languages or speech varieties. Language purists would of course be against such blasphemies. However, the opposite camp would argue that if the language is to survive, be culturally relevant to a non-native population, such phenomena are inevitable and must be embraced.

A lot of serious work has been done on Black English in America by thinkers such as Lisa Delpit, who argue that “English only” in classrooms really means standard English only. The politics of language is often spoken of, and the truth is that attempting to erase cultural and linguistic traces from English spoken in India, is a philosophical question that needs to be dealt with.

Another allied issue is that of the hesitation that is experienced even in Indian academia to acknowledging the existence of ‘Indian English’. At a seminar organised at the Hyderabad Central University on the English Language: Theory and Practice, Pingali Sailaja, one of the most eminent theoreticians of Indian English (or English in India?!) spoke of this very phenomenon. There are then two schools of thought about English in India: one that believes that a language belongs to those who speak it, hence the case for Indian English and the second, is the stance of the purists, who believe that a language must be spoken the way it is meant to be, i.e., with a singular standard in mind. Historically, this would mean that British English is synonymous with standard English.

The author is a Senior Researcher in Education with Digantar, Jaipur and a student of education. She can be reached at simranluthra@gmail.com.