The problem
While revising the chapter on measurement with my class six students I found that many of them were unable to measure the length of their notebooks with a centimeter scale accurately. Two questions came to my mind.
a) What are the causes of this problem?
b) What interventional steps can I take so that they measure any length accurately? 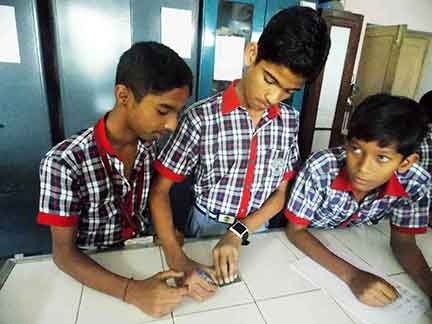 Planning for execution
I decided that the class would be divided into four groups for the experiment. Before the start of the experiment, four cardboards pieces of the same length were cut out. Also, two 15 cm scales were broken into two pieces each (I gave the children broken scales to emphasize that while measuring length they had to be very careful with the initial point, the end point, and the fractions of length). So four pieces of cardboard and broken scales were arranged in the class before the students arrived.

When the students arrived, group leaders were given the experiment materials (one cardboard and one piece of the broken scale) and asked to sit at different desks. They were then asked to call their group members one by one and get them to measure the cardboard with the given scale. When the members measured the length, the group leader had to observe how each member measured and note down his/her observations in a notebook along with the measured length. So as not to build pressure on the students they were told that this was a game that would teach them how to measure accurately with a scale.

Analysis of data
From the observations made by the group leaders, this is what was found.

Intervention
A 10 cm cardboard was cut into 10 pieces of the same size. On each cardboard 1 cm was written. One 1 cm cardboard was cut into ten pieces. The students were asked to measure the length of a 5.6 cm cardboard and keep count of the number of cm and mm they used to measure it. All the students measured the cardboard accurately. This activity introduced them to the concept of ticks and intervals on a scale. They were shown the broken scales, where the beginning and ending points are different and were asked to tell the length of the scale. They were further asked from where they can start measuring an object.

After this, the same group of students was asked to measure a cardboard of length, 18.7 cm, with the same broken scales. Out of 36 students only one failed to measure the length accurately.

Conclusion
When we teach students measurement we simply tell them the technique of measuring length and ask them to measure their notebooks or desk or their palms. We neglect to see whether or not they are measuring objects accurately. Only a few concepts like ticks, intervals, initial point and final point are the main hurdles in accuracy of measurement by scale. A teacher can organize an activity with the help of peer leaders with minimum time and effort and correct planning to teach students how to read the measurements on a scale.

The author is a teacher in Kendriya Vidyalaya Fort William Kolkata. He also works with the NGO Science Communicator’s Forum, Kolkata, WWF (India) West Bengal Chapter, on Science Education and ESD (Education for sustainable development). He is an expert on diagnostic and remedial teaching for elementary and secondary science as well. He can be reached at sabitabratama@gmail.com.