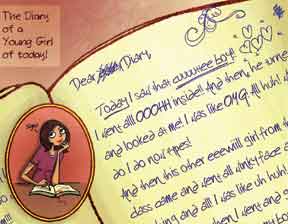 Over the last several years, teachers in school have complained that English is no longer what it used to be. Well, not much else is what it used to be either – whether we explore our influences or our cultural contexts, our schools, or for that matter, even ourselves.

Clark Whelton was a speechwriter for New York City mayors Ed Koch and Rudy Giuliani, and in his article entitled What Happens in Vagueness Stays in Vagueness: The decline and fall of American English, and stuff, he illustrates an experience that could well be close to our own: “I recently watched a television programme in which a woman described a baby squirrel that she had found in her yard. “And he was like, you know, ‘Helloooo, what are you looking at?’ and stuff, and I’m like, you know, ‘Can I, like, pick you up?,’ and he goes, like, ‘Brrrp brrrp brrrp,’ and I’m like, you know, ‘Whoa, that is so wow!’ ” She rambled on, speaking in self-quotations, sound effects, and other vocabulary substitutes, punctuating her sentences with facial tics and lateral eyeshifts. All the while, however, she never said anything specific about her encounter with the squirrel. Whelton describes this kind of communication as “a classic case of Vagueness, the linguistic virus that infected spoken language in the late twentieth century…”

We may not have seen the same television programme, but we have definitely heard this kind of English – among students and unfortunately in staffrooms, in our own Indian television shows and in what is now described as “casual conversation.” In popular Bollywood cinema today, top stars are injected with the same Vagueness virus and their fans who fill our classrooms see no reason to speak in any other way. It’s all just so “cool.” And they are just “so not ready” to see what’s wrong with it as they use the “exact same” phrases.

The author is a Sr.English Teacher at The JB Petit High School for Girls, Mumbai. She can be reached at bubla@rediffmail.com.