I’m going to begin this article with a little story.

Long ago, in the days of King Arthur and the knights of the Round Table, Sir Gawain was given a task: he had to break some kind of spell. In order to do this, he had to find out what it was that women wanted almost of all. He travelled throughout the country, asking every woman he met. All the usual answers – jewels, fine clothes, a handsome husband, love – did not do the trick. Then one day he came upon an old woman on the road. Her answer was: power. Needless to say, the spell was broken. 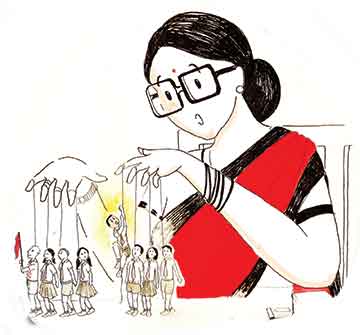 The desire for power is of course not confined to women. We can witness little power struggles everywhere. Here is an example that you will see in any little roadside chai shop/restaurant. The customer wants a drink; without looking up, he rudely shouts “water”. He thus demonstrates his dominance over the lowly waiter. The waiter however has to regain some sort of self-esteem, which he does by attempting to assert himself in the only way available to him: he bangs down the glass of water with a scowl.

We can see this kind of power play enacted between teacher and student in just about any classroom, any day. The student feels put down by the teacher – made to feel powerless, disempowered – and the only way to feel better about him/herself, to assert his/her own feeling of worth, is to put someone else down (either the teacher or another student).

What kind of behaviour would we expect to see in someone who feels disempowered, and who is trying to assert themselves?

What kinds of attitudes and actions disempower a child? 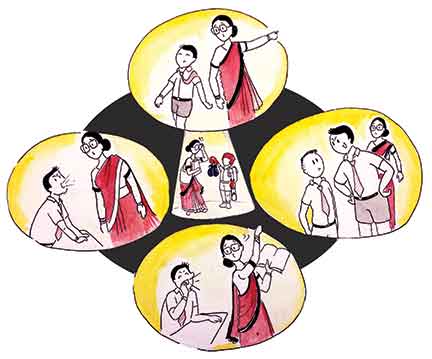 What kinds of words and actions can we employ to minimize children’s feelings of powerlessness?

‘Power struggle’
In the phrase ‘power struggle’, perhaps the word ‘struggle’ is as important as the word ‘power’. Sometimes at the end of the day, we feel exhausted, we feel the whole day has been a ‘struggle’. If that sounds like you, is there anything you can do differently in order to minimize the children’s perceived need to ‘struggle’ against you, and your need therefore to engage yourself in that ‘struggle’?