Mapping is a very important aspect of geography. I always find creating large colourful maps with a group of children a very engaging way of teaching geography. This year, I decided to try a world map project at school with children belonging to different age groups as I believed that this would help build a sense of community among them. This project also helped bust the popular belief among children that one has to be a skilled cartographer to create maps. 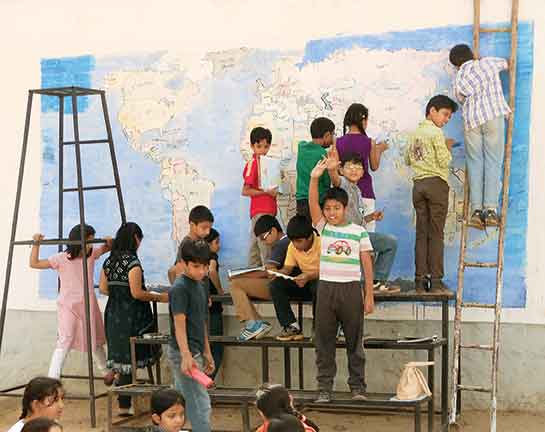 But why did I choose the world map? Last year the children had done fabulous work on the map of India with its states. (Read about it in the article ‘Geography on the map’ published in the July 2013 issue of Teacher Plus.) A number of questions that the children asked during that project were: ‘How do we know where one state finishes and another begins?’, or even more fundamental questions such as, ‘Who drew these boundaries, can we see them on the ground when we travel?’, ‘Why do we need states and borders?’ I then pondered as to how loosely we use the term political map in the class without once checking with the class what the term ‘political’ means to them. This world map may not answer all their questions but will help them learn about the world that everybody shares.

How did I go about it? The first step was choosing the background surface on which the map would be drawn. It needed to be in a place where the children normally spend most of their time. I did not want it to be a secluded safe spot where nobody would spoil it. The last thing I wanted it to be was a Mona Lisa that everybody admired but nobody knew what to do with. It had to be right amongst the children with unrestricted access.

I realized that there was no better place than the wall which stood facing the football field even if it meant that the map would get an occasional kick from a flying ball.

Getting Started: I chose the grid method as this method lets one transfer information from pre-gridded map sheets on to any surface. Before I jumped to the seemingly daunting task of making grids on the wall, I had to teach children to draw grids and understand ‘scaling up (enlarging) and down’ as the case may be. The math teachers got into the act and got the children to

I chose the Robinson’s projection. According to this projection the length is twice the height. The proposed dimension was block size of 3/3 inches. The map would be 84 inches wide and 168 inches long. I had to keep in mind the heights of my little mapmakers too. The map also had to be at the eye level of the children so that they would be able to examine it in detail.

Children from grades 7, 6, 5, and 4 were involved in the project. The continents to be drawn were decided based on their syllabus.
Grade 7 – Americas
Grade 6 – Australia and Africa
Grade 5 – Asia
Grade 4 – Oceans and the seas

With all the expertise on drawing grids tucked under our arms, we embarked on drawing our big grid on the wall. Class 7 participated enthusiastically in drawing the grid box.

There were a number of challenges at this stage. How could I to ensure that the length of the square (parallel to the ground) was a straight line? Here I received help from my science teachers and we used a transparent tube with water and used the ‘principle that water seeks its own level’. 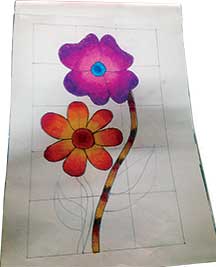 We had to draw 1568 blocks (28 rows and 56 columns). How did I draw these gridlines straight? This was resolved with ideas from a team of cartographers from Orient BlackSwan. I dipped twine in blue powder (clothes whitener) and gently tapped the twine on the wall. A straight line emerged.

It is nice to have a background surface that is clean and smooth. Some would even like to prime it. But I prefer the not so perfect surface with its uneven walls and an occasional crack, rain-washed paint and the green mossy surface at some places telling the tale of many a good monsoon. The wall enjoyed the shade of a neem tree. As the monsoon gave way to pleasant and cool weather, so too the map started taking shape. Children were working in groups of two, while one partner navigates through the grids, the other draws. Children were encouraged to switch tasks and as a group were solving problems they encountered along the way. Continents and countries began to emerge.

When children were drawing the countries and their boundaries, they began discussing the politics of maps. Now they were becoming aware of the neighbouring countries that share borders.

Children initially wanted to use colour schemes based on some physical feature. I let them make their own choices in this regard. We used colour pencils to accomplish this task. The children designed their own colour schemes. This was great fun for the younger children. I allowed them to use various shades of blue. They realized that the more colours they had, the easier it was and that lighter colours helped show the labels better. Children who weren’t particularly adept at map drawing, however, made wonderful map painters.

If I am giving the impression that the map project was a cakewalk, then let me set it right. The children made mistakes – Africa met Spain at Gibraltar, the Mediterranean was landlocked. But correcting them was a great learning experience. There were a number of children who played the role of teachers and helped the others understand maps.

Whilst some groups were working on the wall, the others in the class would play games with the atlas sitting in the football field. These games were devised by them. One such game was called MINSK (see box) after the capital of Belarus. The atlas now had the grime and dust of the football field and I was very happy to see pencil markings on the maps. The atlas was now being considered a book full of fun; map making too was turning out to be joyful.

How did I know that I covered all the countries in the world? I sought the advice of the cartographers at Orient BlackSwan who checked the accuracy of the labelling and positions. We used the chapter in the atlas which had all the countries of the world with their flags to ensure that we had done a foolproof job.

Did we draw all the tiny islands? Here I gave the children the liberty to draw the bigger islands in the group.

During the making of the map, the children were made aware of the inter-relatedness of subjects. In this project maths, geography, and science intermingled with one another and were porous. This facilitated deeper understanding amongst children and was a great learning (unlearning!) experience for the teachers.

Ways to use the world map: It can be used to draw the historic routes of explorers/navigators. The map could be used to depict global patterns in agriculture, population, former areas of colonialism, ocean currents.

It can be used to reinforce mathematical skills in estimation like finding out the number of countries in a given region, creating bar graphs and pie charts to compare information between countries, interpreting statistics.

How much did this cost us? Children brought acryclic paints from home and I got a few more from school. If a tag could be put on the hard work, enthusiasm, thoughts, ideas and feedback from the teachers, children and all involved in this project, then it is priceless!

How long did it take for us to complete this project? In truth, it is an ongoing activity. It will find its true purpose if it is used in various ways. The world keeps changing as seas change their course and nations rise and fall. Political changes are faster and more perceptible than geographical changes. Therefore, mapmakers need to constantly update their maps.

My map too has its own history. Some may naturally look on this work as ’patchy’ and the labelling as ‘not evenly clear and well-written’. This is an opening to sensitize them to the fact that the central purpose of this work is to have fun making maps, boost confidence and generate interest in geography and maps. Aesthetics can take the backseat in this case. For me the learning was in the journey.

Number of players – Any number
Each player to have an atlas of their own.
Objective – To locate places on the map.

How to Play: Decide on a particular geographic location, e.g., it could be the political map of the world or any state of India. Let’s assume the world map. Players take turns to choose a place. The others have to find the place on the map. No clues are given initially. E.g., One player chooses Minsk. The others have to locate this place on the world map. If the players find it difficult, then a clue as to whether the place is in the east/west/north/south maybe given, or the name of the neighbouring country may be given. The game continues with each member taking turns to choose a place for the others to locate.

Number of players – Any number
Each player to have an atlas of their own or can play in groups of two or three.
Objective – To locate places using latitudes and longitudes.

How to play: Let’s take the political map of Europe. One player can choose a place e.g., Lords. The other players need to locate the latitude and longitude of this place. The answer can be cross-checked with the index. The game continues with each player naming a place that he chooses. The player can also choose the place using the index given at the back of the atlas. The children will discover that no two places will have the same Lat-Long.

The author teaches social studies at Vidyaranya School, Hyderabad. She can be reached at
[email protected].