In the first half of June 2014, I was invited by Snow Leopard Adventures and Ananta Aspen Centre to co-facilitate a programme called Planet Harmony in Rishikesh with a group of 32 high school students from Delhi, Manipur, Meghalaya, Kashmir, and Chhattisgarh. The idea was to bring together young people from parts of India that are disconnected from each other, not just geographically but also politically and culturally. Through team building activities, leadership opportunities and dialogue-based sessions, the focus was on building self-awareness and also creating friendships that would last beyond the 10 day camp and sustain each individual’s effort to make positive contributions to their communities.

“What did you teach them?” a friend of mine asked after I returned from the camp. “I didn’t teach them much. They learnt from each other,” I said. “Oh! That’s strange! Then why did they call you?” he asked. The question came from the assumption that an adult in a learning space has to play the role of an expert; someone who knows more than the other people present, and is therefore in a position to determine what each one should learn. Instead, our job as facilitators was to design activities and create learning situations where the students would be able to forage inside for their own wisdom, and also feel safe enough to speak their hearts and minds without feeling judged or embarrassed. 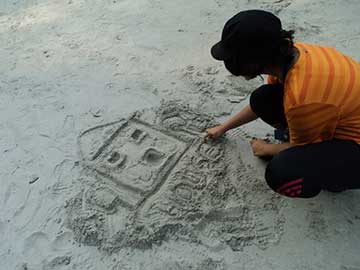 I am a big believer in the power of peer learning, and I was thrilled to see it come alive at the camp. It was affirming to witness how leadership emerged when students were given problem-solving tasks that were filled with obstacles and intentionally so. In the absence of adult assistance, they were able to come up with creative solutions by conferring with each other, and through trial and error. Deciding to stay in the background can be difficult for adults, especially for those who feel that they are being unfair to the students by not helping them out. It is sometimes difficult to realize when stepping away is actually the best way of supporting.

The students were from different backgrounds, not only in terms of the regions they had grown up in but also in terms of class, language, religion, cultural expectations, gender norms, etc. Despite this, they were able to find ways of reaching out to each other. Of course, this did not happen overnight. It took time, effort, encouragement, persistence even, and a lot of love. Those who have studied in English-medium schools often found it difficult to translate their thoughts into Hindi. However, they did not give up. Even at the risk of making mistakes, they tried. And it’s a big deal. People can be extremely resistant in such situations. These students were not.

In sessions which required them to share deeply of their own life and experiences, I was touched to see how these students took care of each other, how they listened with interest and affection, how they honoured each other with silence or a warm embrace, how they wiped tears and offered glasses of water. Their capacity for compassion was stunning in a way that adults need to learn. Peer learning becomes more meaningful when adult facilitators begin to participate equally in sharing what’s difficult for them to share, and in feeling vulnerable. Students have a lot to teach each other, and to adults who are willing to learn. I learnt from them about trying out new things, about laughing at myself, and about having a big heart.

The author is a freelance writer, educator, and founder of Friendships Across Borders: Aao Dosti Karein. For more, visit www.facebook.com/fabaaodostikarein. He can be reached at chintan.backups@gmail.com.