The writing of history has always been a very difficult task. Hayden White, an American historian, literary critic and the writer of Metahistory: The Historical Imagination in Nineteenth Century Europe (1973), has argued1 that the writing of history presents one of the most fundamental of questions on writing, truth and reality. The historian is confronted with different forms of history-writing,there is the annalistic form, comprising sequences of dates and noteworthy events recorded in a tabular format, explicitly factual and apparently devoid of any interpretation by the recording historian; and there is also the chronicle form, the novelistic writing of history that engages with aeons and phenomena as fragments of a story narrated retrospectively, always inconclusive because the writer must end his narrative with the arrival in his story of the present moment and the uncertainties of the future. The writing of histories has, moreover, never been an apolitical task. In the narrative mode of history writing, the story is told from an apparently omniscient point of view, and the reader trusts this point of view implicitly because it is in the very nature of the narrative to appear as if determined by an inexorable, factually-consistent and seemingly confirmed source of knowledge.

It must be then that in the narrative that has been written of the process of coming into being of the Indian state, the source is an amalgam of stories from the past, or respective pasts, of multiple Indian communities, both modern and pre-modern characterized by many intersecting and contradictory periods, of growth and expansion, knowledge and interaction with others. However, the narrative ultimately assumes the function and appearance of a unifying whole. On closer examination we find in this account lacunae that betray the hidden presence of communities across the country that were never, in the first place, recorded or schematized into historical sub-plots that could be attached to the larger national coming into being. 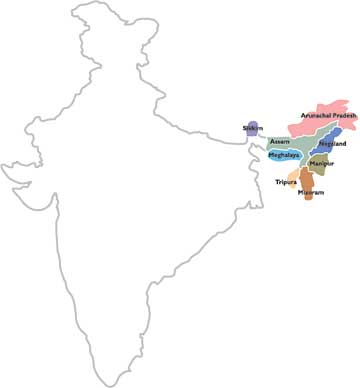 The north-east of India does not find itself represented in the national narrative. In our textbooks, the focus is consistently on a fixed set of historical periods that detail the rule of and transition from one dynasty to another, form one centre of power to another. The north-eastern states do not fit very neatly into the transitions, for instance, from Magadha to Oudh, from Vijayanagara to Rajputana, from Calcutta to Delhi.

The north-eastern states, as in their erstwhile non-delineated form, were predominantly tribal societies, whose social formations were not akin to those in the rest of the country. Power was more diffused, more amorphous, and recorded history did not exist in most cases. There were, however, distinct periods.2 Assam came under the rule of the Ahoms, a tribe from Thailand, in the 16th century. Tripura in the 14th century was ruled by the Manikya dynasty, a family of Indo-Mongolian origin. The history of Arunachal Pradesh can be traced only to the coming of the Ahoms in Assam. For most of the other states, “officially” recorded history began with the advent of the British and the consequent subjection to colonial rule. The imperial government in India took possession of Assam in 1838. Although the modern history of Manipur dates back to 1762, when the king concluded a treaty with the British to repel an invasion from Myanmar, for Arunachal Pradesh, Meghalaya, Mizoram, Nagaland, history begins with the British conquest of the respective tribal societies in the 19th century. For Meghalaya particularly, and its Khasi, Garo, and Jaintia societies, the British influence proved particularly overwhelming, squeezing out a lot of the tribal customs to make way for the ascension of a missionary Christianity that ultimately spread widely across the region.

Interestingly, the modern north-eastern states as they stand today have a very recent history. Sikkim became a part of India as late as 1975 by a special referendum. Before that, India had prepared a special constitution for Sikkim, which was approved by its national assembly in 1974. Nagaland became a state in 1963, Manipur, Meghalaya and Tripura in 1972, and Mizoram and Arunachal Pradesh in 1987. In the intervening period, there were agitations, political formations, underground formations, civil society movements and student protests. In some cases, there were brutal acts of terrorism and secessionist movements.

The north-eastern states have been for a long time politically volatile. They have also been an important space for national policies. Most of the tribal societies are Scheduled Tribes and have access to special reservations policies at both the national and the state level. The reservations system has spawned a new kind of politics, a new form of dependence on skewed bureaucratic privileges. Special tax laws apply to many states, with carte blanche income tax waivers.

There are also deeply violent policies. Manipur has, for the past so many years, been under the Armed Forces Special Powers Act (AFSPA). Agitations against military atrocities gathered momentum with the death of Manorama Devi in 2004. Thereafter, demonstrations against police and military brutality through the first part of this decade met with swift, indiscriminate and brutal violence. Civilian demonstrations were not tolerated by the occupying army. In villages, in towns, in cities, peaceful protests were broken up violently by a ruthless police force, protesters assaulted brutally and fatally with rubber bullets, tear gas, batons and sometimes guns. In the villages, protesting boys were rounded up and tortured for hours on end. In Imphal, protesting students were beaten up in uncontrolled lathi-charges. The current struggle in Manipur is represented by the ongoing hunger strike by Irom Sharmila, of whom some students may have heard.

The way we read history is very specific. It focuses on a set of identifiable historical periods and phenomena. The history of the north-east is a diffuse amalgam of pre-modern customs and modern state policies. It is difficult to fit this into the pre-existing paradigm. As a result, it does not feature in our history textbooks. Or, for that matter, as part of our Political Science textbooks. In Sociology, it becomes part of a list of tribes that has to be memorized for exams, not studied analytically. We hear nothing of the process of state-formation, of the pre-modern era, of the current political climate. As you emerge from the university and go into research, you find more texts, more representation, but for the school-going child, for generations of children, the north-east is and has been practically a cul de sac. We read about the Marathas, the Cholas, the Rajputs, the Mughals, the British, Bengal, Madras, Bombay, Delhi, the pan-Indian nationalist struggle, but the north-eastern states, which cannot be essentialized into a single unit, each being a distinct culture with mutually distinct languages, remain entities off the map. For the school-going child in the north-east, his sense of history must emanate from Calcutta and Delhi, whilst Imphal or Kohima remain recondite names hidden in an index at the back of some chapter, if at all.

For classrooms outside the northeast, it would be useful to find out how much the children know about the region and to what extent they are able to connect recent news (Irom Sharmila’s protest, the insurgency in Assam, etc.) with past events. How much do they know of the culture? How can the seven sisters become more a part of modern India?

Teachers in the region can use history in ways that reinforce the connections with the rest of India. Follow newspaper coverage about the region for a period of one month and see if any repetitive patterns emerge.