More often than not, the Nobel Prize is awarded to inventions and discoveries which are extremely hard for the common man to understand. Ranging from the invention of the cyclotron to the discovery of the Cherenkov Effect, even students of science find it hard to make sense of the details of the subject of the prize winners. However, this year a seemingly simple invention was conferred the Nobel Prize for Physics: the blue LED light.

It has been over 20 years since the blue LED has been in existence, and in this time span, it has changed the face of technology. The wide and far reaching implications of the blue LED include televisions, communications and pretty obviously: lighting.

Why is it special?
It is common knowledge that a combination of the primary colors: red, green, and blue can be utilised to create the colour white. Red and green LED have existed since the 1920s, but with the invention of the blue LED, the holy trinity of the primary colors was complete, thereby making it possible to make white light. And with the availability of white light, the combination of LEDs now find use in highly efficient lighting, high resolution displays in phones and televisions, data communications, to name a few of the applications. 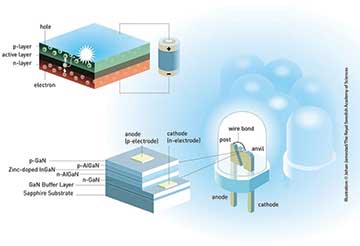 The science behind
A diode is a combination of two semiconductors, one ‘n’ type and the other of ‘p’ type, forming a ‘pn’ junction. The p-type is electron-deficient and the n-type is hole-deficient. When a voltage is applied across the junction, the electrons and holes recombine, releasing energy. When this energy lies in the visible range, the diode is known as a light emitting diode or an LED.

After the invention of the LED in the 1940s, the next step was to produce all the three primary colours: red, blue, and green. It was soon after that green and red LEDs were invented, but the frequency band to achieve blue light proved to be elusive till the mid 90s.

The blue LED was made with pioneering research of three scientists on sapphire nucleation of Gallium Nitride (GaN) crystals, enabling the electrons to recombine to release energy whose frequency was close to the blue end of the spectrum.

The far-reaching implications
Today, 20 percent of the world’s power generation goes into providing lighting. And with the superior efficiency of the LED over CFL and incandescent bulbs, imagine that percentage coming down to four percent. Also, the low maintenance of the LED is an added feature. Remote locations which did not have the possibility of lighting, can now be efficiently illuminated using LEDs.

With 306.2 million people having zero access to electricity in India, the world’s highest ranked country in terms of power deficit, the energy efficient LED could be a huge boon.

The LED can last up to 100 times more than the incandescent bulbs, and unlike CFLs, it does not contain mercury, making it environment friendly as well. CFL disposal has been a major issue because of the environmental risk it poses, but with the advent of LED bulbs, we have a new eco-friendly alternative. “The LED lamp holds great promise for increasing the quality of life for over 1.5 billion people around the world who lack access to electricity grids,” the Nobel committee said. Due to low power requirements, it can be powered by cheap local solar power. 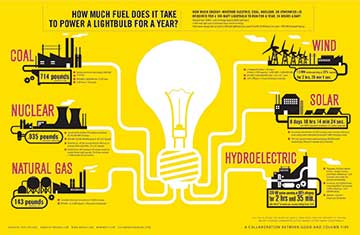 Current applications
They are fast replacing the conventional lighting methods, i.e., CFLs and incandescent bulbs, all over the world, due to their durability and energy efficiency. Due to their low energy consumption, they are used as indicators and signs on various installations and equipment. They are commonly seen as traffic lights, stadium displays, and as decorative lighting. They are also used in automotive lighting as they light up faster than incandescent bulbs, and hence used for brake lights and head lights.

Their usage in LED displays is something which is becoming extremely widespread. Television and smartphone screens are the primary examples this application. They are also used in night vision devices and are not uncommonly found in security cameras.

Because LEDs can cycle on and off millions of times per second, very high data bandwidth can be achieved and hence they are used to transmit data and analog signals.

The people behind the invention
Japanese researchers Isamu Akasaki of Meijo University, Hiroshi Amano of Nagoya University, and Shuji Nakamura of the University of California, Santa Barbara shared the prize for making diodes that give off blue light.

Akasaki, 85, of Japan, is a professor at Meijo University, Nagoya is a distinguished professor at Nagoya University. Since the 1960s, Akasaki has been researching ways to solve the issues facing high-performance blue LEDs and lasers. And for his continuous efforts, he was the recipient of the 2009 Kyoto Prize for Advanced Technology and the 2011 IEEE Edison Medal.

Amano, 54, of Japan, is also a professor at Nagoya University.

Nakamura, 60, a Japanese-American, is a professor in the College of Engineering at the University of California, Santa Barbara. He received the 2006 Millennium Technology Prize and the 2009 Harvey Prize, and has also worked on green LEDs, and is credited with the creation of the white LED and blue laser diodes that are used in Blu-Ray discs and HD DVDs.

How is this discovery relevant to people especially in the developing world? Will easier access to lighting improve people’s lives?
List out some electronic devices that you have at home.
Will your life be different without them?
What is the difference between natural light and artificial light?
What is the difference between an incandescent light bulb and an LED energy efficient light bulb? List out the advantages and disadvantages of both.

The author is a graduate in chemical engineering from BITS Pilani. A football fan, he also likes to write from time to time, and loves to read. He is also a huge travel buff! He can be reached at
[email protected].