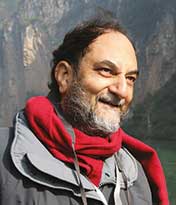 Born in 1950, Vinod Raina breathed his last in Delhi on the 11th of September 2013. He had been diagnosed with cancer a few years ago, but did not let it be known to even his close friends and associates. He worked and travelled relentlessly till a little before he was admitted to the cancer hospital in the third week of August. I met him last on the 10th of July at Bhopal at the RtE conference – he was his active self and no one could even guess that his cancer had already spread – even though he himself knew it.

This spirit of Vinod to drive himself to work till the last is what signified his personality for many of us. Vinod had been associated with Kishore Bharati’s (KB as we used to call it) Hoshangabad Science Teaching Program (HSTP) since the 1970s, as part of a large resource group of scientists and science students from Delhi University, Tata Institute of Fundamental Research, IIT, and various universities in Madhya Pradesh.chong qi you yong chi

Kishore Bharati was a developmental organization which had various developmental programs, one of which was the HSTP, which sought to improve science education through curricular change in government middle schools of Madhya Pradesh. In the early 1980s, the HSTP resource group began deliberations on how to attempt to improve school education as a whole instead of only science education. It was evident that KB’s institutional priorities and structure could not sustain this large enterprise. Thus was born the idea of Eklavya, a new and very different organization. Vinod was among the small group of young doctorates who decided to quit their jobs and work for the development of Eklavya (Hriday Kant Dewan, Gautam Bhattacharya, Anwar Jafri, MoizRasiwala).Though part of the founding group, he played a crucial role of putting together and facilitating the direction of ideas of the people who were joining as well as the larger group of supporters.

I was a postgraduate student at Delhi School of Economics at that time and became part of these deliberations which inspired me to become part of this education movement. Vinod also introduced me to Indian classical music, good literature – Zola for example, and avant garde films. He was a person with many tastes and talents and a vision for large movements and programs, not constrained by narrow project interests. This is what made him take the National Bharat Gyan Vigyan Samiti agenda forward, to work on issues of climate change and ecology and the implications of this research on science education and contribute to the formulation of the Right to Education Act, along with many others with a similar vision and experience. However, in recent years, he was less patient with disagreements – perhaps because his cancer made him want to fill ‘every unforgiving minute with 60 seconds of distance run’.

Vinod was a deeply humane person with a multifaceted personality, of multiple interests and rigorous engagements that is rare to see these days, even in the non-governmental sector. We all fondly remember him for the engaging discussions interspersed with good music (he would sing songs of KL Saigal and Pankaj Mullick), good food, often cooked by him, and good literature. The best tribute that we can pay him is to strive to enjoin many more in this struggle for good universal education and a democratic cultural revival. He will be with us always.

The author has been working with Ekalavya since 1982. She has worked on developing educational programmes at the elementary school level and in teacher education. She has been a member of the NCTE, the SSA, and the five-year plan working groups for elementary and teacher education over the years. She can be reached at anjali_noronha99@yahoo.com.