About two years ago, it became apparent to me how important it is to draw attention to the fact that very often the intersection between caste/tribe status and gender creates the most vulnerable group among our children – girls who belong to either the Scheduled Caste or Scheduled Tribe communities. Just 18 months ago in Delhi on December 16, 2012 – the anger, outrage and protests in the streets received much attention. And yet, a month later, there we were, confronting the story of young tribal girls, between 11 and 14 years old, being sexually abused in the government-run hostels that were supposed to be the place where they were being ‘educated’ – the education that should be helping them to bring social change including preventing any such abuses. In my previous article on caste, I talked about how the problem of caste promises to continue to be one of the biggest challenges we face in our schools in the foreseeable future. Gender is both interrelated and multiplicatively connected to caste/tribal status and therefore poses another great challenge to creating inclusive schools.

But isn’t this a detour? This article is supposed to be about inclusive schools and the issue of gender. What am I doing discussing rape and sexual abuse? Well, it’s because apart from police and judicial reform which are recommended often when such crimes are discussed, the single largest consensus that exists is that education has to play an important role in the way we as a society deal with the brutally unequal way women in this country are treated.

Violence against women is considered routine, even unremarkable, in India and this is deeply disturbing and needs to be remedied. What bothers me equally is the reaction to it. A few months after this incident of sexual abuse of tribal girl children being exposed, I remember attending a discussion on education in the capital city of the same state. The Mayor of the city had been invited to speak at the event and she spoke of an initiative they were starting to teach self-defence to girls in government schools. So far, so good, I thought. Then she went on to talk about the importance of children learning ‘traditional values’, how women in India have always been worshipped, the need for girls to be less conspicuous and more circumspect in their appearances in public and how all this put together is what would truly ensure the safety and security of young girls. I remember thinking, “What are these ‘traditional’ values she is speaking of? This line of thinking is so regressive. It reinforces patriarchal thinking about a man’s duty being to protect (related concepts are honour and prestige). And of women having no agency and no rights. If this is what policymakers and implementers in education think about how to do something as basic as to ensure the minimum rights of any girl child, what hope can we have that this system will educate children who can produce any social change?

A sense of secrecy with regard to pervasive violence against women used to be the norm in Indian public life. Everyone knew it was happening, but it was the elephant in the room no one was willing to talk about. We would often talk of the “sensitivity” of issues of sexual abuse as a justification for a lack of willingness to scrutinize this issue further. Slowly but surely, a new kind of conversation has been sparked in India. Now at least when it comes to violence against women, there is a shift in the blame from the victim/survivor to the perpetrator. But this is only the beginning of the story. After this comes the part where education becomes very important. Does education truly encourage a critical examination of what is happening and why? 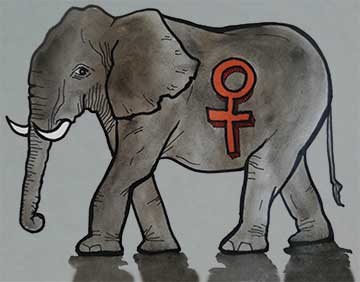 I remember a conversation with the members of a team I was working with. They told me they wanted to know how to deal with adolescent girls we were working with who were being “spoiled” by the fact that they now had access to mobile phones. I decided to go and talk to some of the girls to find out what was really happening. These young girls had been given mobile phones by their parents who thought they would be useful for their ‘protection’ but had instead turned into a bane for them. Now, young boys would somehow get a hold of their phone numbers and call them out for ‘walks in the park’ after school. Some wanted to go, some didn’t. “Most normal,” I thought, “for a group of teenage girls.” However, given the conservative backgrounds they came from, this situation they were in could prove deadly for them – quite literally. Jilted young adolescent boys in India have been known to throw acid on the faces of young women who say ‘no’ to them. On the other hand, the girls told me, they were terrified their fathers would find out because their fathers could do the worst thing possible – they would take them out of school. What were these girls expected to do in order to continue to get an education? Like the tribal girls who were being sexually abused in their hostel, what is the price that a minority/SC/ST girl has to pay to get an education in this country?

To help us understand how gender influences a child’s world in a government school it is important to see what she sees and experiences. Who and what does she see going on around her? Is she told that her primary function when she grows up is to get married and produce children? Or is she told she can be anything she wants to be when she grows up? Does she see pictures of Savitribai Phule displayed with pride in her school? Is she told about the stories of how she was India’s first woman teacher and had the phenomenal courage to educate girls and scheduled caste children in 1848, a time when everyone except her husband stood, often violently, against her, a time when education for women was considered no less than a punishable crime? Is she encouraged to think about the possibility that if indeed teachers must be celebrated, then it would be a good idea to celebrate ‘Teacher’s Day’ on Savitribai Phule’s birthday? Do we send her a strong signal that she too can be like Savitribai Phule? Is she made to wonder what made Jotiba Phule educate and support Savitribai against all odds?

And it’s not just that Savitribai Phule (or other avarna women) is missing from textbooks or from the teacher education syllabus. I notice that women are all but absent from all positions of power in the state-run education system. In the State I work in, we recently concluded a training program for more than 100 Block Education Officers. How many women did this group include? If you guessed zero you are not far off in your estimate. There were two women in a State where there are almost 150 officers. This absence is not just in numbers. It is an absence of hearing their voices, their experiences, their struggles – especially the absence of the voices of underprivileged women, of progressive women. (At other times one does hear these voices, like that of the mayor I mentioned earlier, whose voice would be conveniently considered a credible opinion of ‘women’ by their patriarchal minded officer colleagues).

On the other hand, the presence of even just these two women made a difference in this training. At one point during the workshop, after being shown a video in which it was evident children in a particular school were not learning anything and their teacher explained this situation by saying it was to be expected given that 90 per cent of the children in the school were tribal, the BEOs were asked whether they agreed or disagreed with the teacher. One BEO said, “Yes, I completely agree. Tribal bacchonka mental status low hotahai (the mental ‘status’ of tribal children is low).” As I gasped for breath at this statement, this tribal woman, who had been appointed BEO just 3 months ago making her the junior-most member of the group, stood up and in a quiet voice asked, “Aap kis aadhar par yeh keh sakte hain? Mujhe nahi lagta hai ki aap ko yeh kehna chahiye. (On what basis are you saying this? I don’t think you should say this).” This is a system where women’s voices don’t even make it to the room, let alone get a seat at the table, so I realize the enormous courage it must have taken this woman to express her views. We need more such women and more such conversations.

Today we recognize the role that education can play in changing the attitudes that produce the horrific treatment of women we see every day in the streets and in our homes. However, unless we recognize the crucial link between this and the other evil that plagues our society – the caste system – and until we start taking action to truly dismantle that system and bring about structural changes in our society – what role can education play in our schools in promoting gender equality?

Dr. BR Ambedkar in his paper “Castes in India” written in 1916 put forward the insight that the caste system thrives by its control of women, and that caste is an outcome of sustained endogamy. Are we ready to, at the very least, engage with these ideas in our curriculum for children and for teacher education?

In the words of John Dewey, “social conditions tend to instigate and confirm wrong habits of thinking by authority, by conscious instruction, and by the even more insidious half-conscious influences of language, imitation, sympathy, and suggestion. Education has accordingly not only to safeguard an individual against the besetting erroneous tendencies of his own mind – its rashness, presumption, and preference of what chimes with self-interest to objective evidence – but also to undermine and destroy the accumulated and self-perpetuating prejudices of long ages.”

So gender equality will only begin to be part of the process of education if we understand the true role of education as being to equip us with the sort of critical thinking necessary for questioning authority and dispelling false beliefs bequeathed to us by society – not just about women, but about all human beings. We need to tackle some of these difficult questions about caste and gender simultaneously to have truly inclusive schools.

The author has worked with the government education system in India for the last seven years. This has been her second “education” after growing up in a home with two teachers for parents, studying in an alternative school, an Indian liberal arts college and then in the United States. She can be reached at aditi.t@gmail.com.