And if one of them is a senior teacher, does this affect the dynamics in any way? 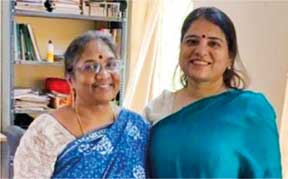 Here is an account of such a collaboration, which sprang out of an idea mooted during a staff meeting: “Let’s try and teach a subject that is not the one of our training!” Swati (who usually teaches Hindi across grades at The Peepal Grove School) sprang into action as soon as she heard this, and teamed up with her colleague, Ratna (who teaches social studies across grades at the same school).

Initiation of teamwork
Mulling over this idea in the staffroom, Ratna expressed her need for clarity on the topic “The Constitution”: ‘I want a few tips on how to go about transacting this in Grade VII.’

Immediately, Swati (whose favourite subject had always been civics) came forward to explain. Within a couple of minutes, she found herself requesting Ratna to let her teach it, although she confessed that her English was not so good. Ratna was only too willing to let her try, as she claimed: ‘I was confident she would be able to do it and my selfish agenda was also to learn the topic properly.’ 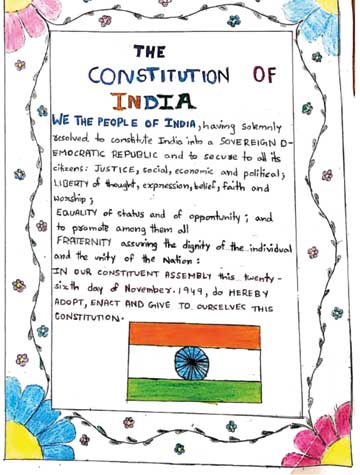 Since Ratna was slated to teach the Indian Constitution to Grade VII next, Swati sought her permission to take one or two classes on the topic. Ratna readily assented to her taking one of her four weekly classes, over two weeks.

So, Swati began with an introduction to the topic: “The Constitution and the Preamble”, even as she shared with Ratna that she wanted to do this alone, so as to build a rapport with the children. Moreover, as she was teaching civics for the first time (and that, too, in English), she had to see how it would go. ‘I was quite comfortable with the subject terminology in Hindi,’ Swati acknowledged.

So Ratna merely introduced Swati to Grade VII and left the room. This was a big surprise for the children. Although Swati confessed that she was really nervous at the beginning, her attempt to contextualize something as heavy as the Constitution reaped rich rewards. She began by giving the example of a family shifting into a new house.

‘How would you decide on suitable ways to enable everyone in the family to feel respected, happy and comfortable?’ she asked the class.

Now, the children got busy drawing up a rule book that they called their ‘constitution’. Thus, Swati enabled the organic unfolding of topics related to the Preamble, by scaffolding the exercise through questions like:
• How do you want your new house to be?
• Wouldn’t you give good space to your grandparents?
• Or would you give equal space to everyone?
• Would your adolescent siblings have a different set of rules to follow?

From the children’s ready responses, it was clear that they understood and also enjoyed the lesson. Since Swati emerged from that class happy and confident, she continued taking the next class, too. After four classes, Swati felt comfortable enough to have Ratna sit in the class as an observer. Having explained the Preamble, she now showed some videos about how it had been constructed and presented in the Parliament, by Dr. B.R. Ambedkar. Encouraged by her positive experience, she then came up with the idea of completing the topic.

This is how a collaborative effort was born.

Planning and transaction
The positive response from the children made both teachers feel that if one teacher transacted the entire topic, it might benefit the children more. And so, they now decided that Ratna would take three of the four weekly classes for history and geography, while Swati would handle the civics part of it for rest of the term.

The hesitation that Swati’s schooling in Hindi had left in her was now blotted out as she began seeing Ratnakka’s confidence. So, she began preparing notes before the class so that she wouldn’t make spelling mistakes while writing on the board. She would also periodically confirm the right pronunciation of difficult words from Ratna, a practice which turned into a teaching in itself:
‘I never had any inhibition to ask akka in front of the children, and this, in turn, gave them the space to ask us their own doubts. It also gave them a glimpse of our bonding.’

The two teachers now made it a point to hear each other out before every class, and use that time to discuss, plan and redesign the pedagogy, after mutual consultation. Inevitably, there were times when they agreed and others when they disagreed. However, they never had any insecurity or ego issues, as both were very clear that their main focus was that children should understand the content.

Pedagogy
After ascertaining that the children had grasped the purpose of the Preamble, both teachers decided that they should then have them represent it pictorially. So, they divided the class into groups and assigned a topic to each group, e.g., equality, justice, liberty, secular, sovereignty, fraternity, socialist, republic, etc. As the students did their research, Swati helped them select appropriate books from the school library. The teachers then asked them to draw pictures and write about the topics given. Here, they drew in another collaboration, viz., that of the art teacher, who guided the children as they began to draw. 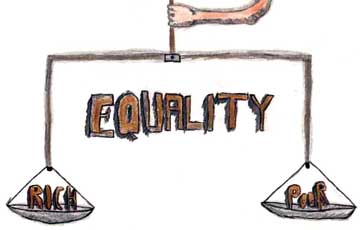 Soon the walls of the school hallways displayed colourful pictures with explanations.

To reinforce the concept further, the children were then encouraged to perform skits. Now the teachers thought it wise to change the groups, and so they formed the groups. By now, the children had been observed closely for quite some time, and the grouping strategy incorporated these observations. Factors like girl-boy ratio were considered, and a mix of members that would demand – and thus enhance – teamwork was ensured.

Students came up with ideas for presentation, and then performed the skits in front of the class. For example, the group that was enacting ‘Sovereignty’ used the (then current) topic of a defence deal to bring out the refusal of the Indian government to kowtow to any external country’s advice, and adhere instead to the stand that India is a sovereign country that will not tolerate any interference in its defence policies. 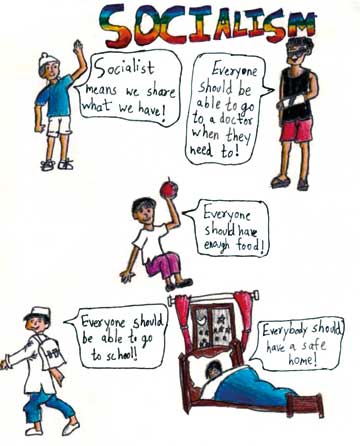 To deepen their understanding of the subject beyond what was possible inside a classroom, the teachers then gave the class a newspaper and asked them to ferret out articles related to the Constitution – like Fundamental Rights and Duties, Directive Principles, etc. Since one guideline under the Directive Principle was ‘To provide free and compulsory education for children up to the age of 14’, children found the following news reports related to education:

These news items sparked off rich discussions in the class. Not only were students able to connect their learnings to actual national events, they were now encouraged to articulate their points of view in writing. To further consolidate this understanding, the teachers also gave this as holiday homework, allowing children to take the help of elders at home. The intent was also to draw in family members and enable children to gain an awareness of their immediate surroundings.

When it came to the topic ‘The Fundamental Rights – Equality’, the children chose the following news reports:

Roles during collaboration
Like any team, the two teachers had to work out their boundaries and roles as the work unfolded. While it was clear that being the subject teacher, Ratna was in charge, nevertheless, she remained open to her partner’s ideas and sometimes even allowed Swati to take charge. For instance, when it came to the performance in the assembly, Ratna was initially not as convinced as Swati about the quality. So, the content was tightened and unless the children showed visible improvement in dialogue delivery, Ratna did not approve. Thus, it was a collective decision that demanded extra hours, as class hours were inadequate.

In turn, Ratna had to concede a point to Swati, who was not as concerned about the time factor as she was about the huge benefit of clear understanding that would emerge from performance of the skits. To Swati’s delight, Ratna understood her stand and consented to her altering the entire programme. Thus, the emphasis changed from splitting the presentation (into a display of charts followed by performance of skits) to one where the performance was centre stage, and the charts were on display all around for people to view at leisure.

“The best part of working with Ratnakka was that she would understand my position and remain open to my ideas without bringing in her ego,” declared Swati.

Seeing the high quality of the students’ performance, both Ratna and Swati wished to have them perform it again before the entire school. So, the skits were staged in the assembly too, and their work was highly appreciated.

Such an overwhelming response and palpable enthusiasm of the children spurred Ratna and Swati to teach the other two topics (Fundamental Rights and Duties and Directive Principles of State Policy) also in the same way. [An example of transaction is contained in the textbox below]

Teachers’ takeaways
This collaboration opened up a space for the two teachers to think together and both declared that they learnt enormously, in the bargain. Mutual cooperation helped things to move smoothly, as they discovered that they gelled well as a team. Out of their innocence, the children would sometimes miscommunicate things that could easily have created a rift between them (e.g. declaring that the dialogue had been changed by one of the teachers in the absence of the other, when, in reality, the children had themselves altered it), but neither teacher allowed such trivial issues to come in the way.

Being the less experienced and younger teacher, Swati experienced Ratna as being very supportive in allowing her to work in her own way. She was amazed to see the senior teacher’s enthusiasm and openness to listen.

“I have a problem of rushing through,” confessed Swati, “while Ratna akka has a very steady pace and would go into details and repetition for explanation. On my part, I would suggest that we can sort out doubts later individually. I pointed out the time constraint, adding that most of the children had already understood the concept. She would agree to my suggestion, and so I attended to those children separately while akka was with rest of the class.” Ratna’s consent to Swati’s way of working with the children was a refreshing experience.

‘I love the fact that she is still learning,’ declared Swati. ‘I see her clearing her doubts from the geography teacher, too. I love this quality of hers! This was my biggest learning.’

Ratna declared that even as she began acquiring a deeper understanding of the subject, she now understood how constitutional articles came into existence and how they later turned into laws. In addition, she appreciated how Swati would never wait to do the work but would finish it instantly, even when there was enough time. Ratna also observed how Swati would deal firmly with some children – ‘They responded well, which surprised me!’ In the same situation, Ratna would tell the child softly, but Swati adopted a loud tone, and the response was instant. ‘I understood this and started applying the same strategy from thereon.’ The most refreshing part of it all was the sense of sharing the work.

Observing their teamwork from start to completion, the principal wanted them to share their journey with the rest of the teaching faculty. It was then that these two teachers realized all that they had done and how the collaboration had organically grown.

Throughout their four-month journey, neither of them swerved from the common aim: the child should be benefited.