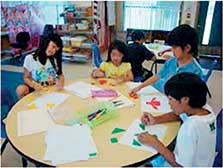 Tangram, now considered a great puzzle, is actually an ancient art. The story goes that the legendary Chinaman ‘Tan’ first conceived it. In Chinese this puzzle is called ch’ich’iaot’u—an ‘ingenious puzzle figure of seven pieces’.To play you simply need to rearrange seven pieces, each called a ‘tan’ to exactly reproduce a given image. While there is no evidence to corroborate this story it is known that it was a popular recreation in China near the start of the 19th century. This was followed by a craze in America, Europe, and Asia where it was one of the most popular games of the 19th century.

They look like:
The objective is to create images using these seven pieces.

For example:
As you can see, these images are either geometric in nature or patterned after a familiar object. Thousands of such images can be made thus making the tangram a very interesting and challenging puzzle.

How can we make the tangram pieces?
Making the seven pieces is easy! There are two possible ways, my favourite way being the second way.

What you have in the above picture are four rectangles with width in the ratio of 1:2 as shown below.

Draw red lines as shown on the rectangle obtained from the matchbox. 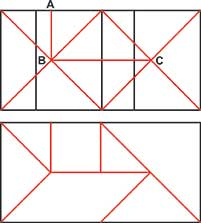 As you cut along the red lines you get the required seven tans!

The tangram in the math classroom
There are many ways that the tangram can be used in the class.

Geometry
The seven tans can be used to make various geometrical shapes.

At each step, let the students justify their answers with reasoning. “Conversations to give reasoning” helps develop the mathematical mind.

Storytelling
This is an interesting idea I found on a website. (Check http://www.logicville.com/puzTS-A1.htm for the complete story). Give students a story and ask them to make the tangram puzzle asked for to match the story.

It starts as:
One upon a time, there was a crow.
(Puzzle for students)

The crow flew over a mountain.
(Puzzle for students)

RESOURCES FOR MORE
Endless material is given on the Internet on how tangrams can turn in to a fun educational aid. Some of the good sites that you can refer to have been listed within the article. You could also simply go to a search engine and look for “tangram worksheets” for more ideas.

So the next time you think your students are not ready for a math class, simply pull out your tangrams and see the atmosphere change.

The author has been a teacher for 19 years and is on a sabbatical from ‘schooling’. She is now a freelance math curriculum developer and is experimenting with strategies to make math accessible to all. She can be reached at [email protected] and has a blog titled http://humanemaths.blogspot.in.