In 1971 Philip Zimbardo, a professor of psychology, conducted the controversial and highly unethical Stanford Prison Experiment. Zimbardo randomly selected a number of healthy young men and divided them into two groups of prisoners and prison guards. They were unaware that this was a set up. The prison guards were dressed in impressive uniforms and armed with batons to resemble a real guard. The prisoners were dressed in short shapeless robes, they wore stockings on their head to simulate baldness and each was identified only by a number. The idea was to simulate a real prison as closely as possible. The participants conformed to the roles, surpassing Zimbardo’s expectations. The prison guards became extremely authoritarian, to the extent of torturing the prisoners. Two prisoners had to be removed from the study early as a result of psychological breakdown and many of the others also suffered acute mental distress. The study affected Zimbardo himself who had not anticipated the extent to which the study had devolved.

One can easily draw parallels between the prisoners’ uniforms and a majority of the uniforms enforced on students today. School uniforms are in most cases designed to be minimalistic, dull in colour, plain, and boring. Male students are required to keep a certain (short) length of hair and female students are required to tie the hair back without even one loose strand. Likewise, the prisoners’ uniforms were plain white loose clothing and baldness was simulated to minimize individuality. The effect of the uniforms was to inculcate a sense of unimportance, powerlessness, and helplessness. Some of these debilitating effects can be seen even with school uniforms.

Much like the Stanford Prison experiment, there have been many other studies on the psychological effects of uniforms. This article attempts to explore and understand some of these effects within the school context.

The need to experiment
To start with some of the more obvious implications of school uniforms, they obstruct the individuation process of an adolescent by killing individuality and independence. It is during the adolescent years that people develop their unique personality and style by experimenting in a variety of ways and examining and challenging parent-given and family-given roles, values, and characteristics. Adolescents need to grow through rebellion to reach a balance between their authentic self and family/society-given values. Enforcing uniforms obstructs this process, as a large part of individuation is developing a dress sense and a dress style. When the student has no freedom to choose what he/she can wear, the process of developing one’s own style and developing a creative expression of self is stopped completely. Adolescents need to experiment and make their mistakes to find themselves.

There is yet another benefit of this explorative phase. It is through this trial and error that one learns appropriate ways to dress depending on the situation and one learns to observe and respond to social cues of approval and disapproval. Sensitivity to social situations is a skill honed as one grows. It is essential to go wrong and sense (non-verbal) disapproval if one is to be cued into the signals in the future. One learns when and where it is appropriate and necessary to fall in line with social norms and which the occasions are where one can throw caution to the wind. If a child is always told what to wear, there is no question of ever developing the sensibility oneself; the child will always rely on another for instruction. If allowed to happen naturally, though, individuation leads to a happy, well developed, independent, well-adjusted person. Successful individuation also impacts and improves self-esteem, a crucial determinant of psychological well-being. Developing a sense of self leads to strong individuals.

De-personalization
Uniforms not only block the individuation process, they also cause de-individuation, which is a loss of sense of self. Innumerable studies have shown that uniforms cause the feeling of anonymity and under the hood of anonymity, individuals are more prone to anti-social behaviour. When donning a uniform, one ceases to be an individual, one becomes the uniform. The experience is that of a diffusion of responsibility – one feels that culpability rests with the role and not oneself. A General S. Kapoor will kill in war because that is what soldiers do even though that might not be what Shalini Kapoor, mother of two, does at home. That is an extreme circumstance, but in school situations, bullying and drug use are possible outcomes.

This further causes de-personalization; the process of identifying oneself as a part of a group over and above one’s individual identity. Hence wearing a school uniform would immediately cause a student to see herself as ‘a student of XXX school’ and not as ‘Anjali’. A doctor in her coat would be ‘Dr. Rao’ rather than ‘Nisha’. De-personalization is the sacrifice of one’s personal self to don the role the uniform demands. Individuals experiencing depersonalization would act according to the norms of the social group the uniforms allow them to identify with. Hence if the school is an elitist school, donning its uniform would immediately cause students to act arrogant and dismissive of other students. They might start discriminating and harassing children attending a ‘lesser’ school. It is important to note here that this can work the other way as well; a uniform can cause healthy pride and love for the affiliation it symbolises. A student of LSR, Delhi would probably be encouraged to work harder and live up to the name of LSR when wearing an institutional identification. This is seen as one benefit of uniforms. However, research has failed to find any direct effect of uniforms on academic achievement (Brunsma et al., 1996). 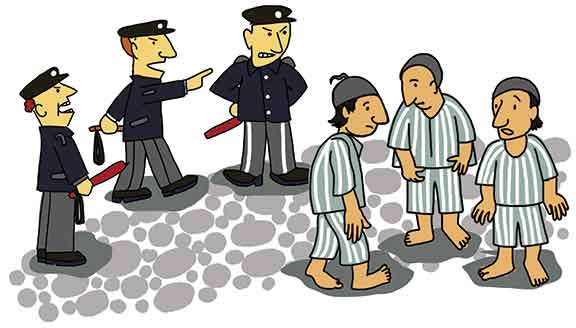 The equaliser concept
Let’s also look at the ‘uniforms as an equaliser’ concept. Can one not make out differences between a well-washed uniform made of high quality cloth and excellent stitching and a drab, dirty, and scraggly uniform? Can one not differentiate based on the bags students carry, the watches they wear and the food they bring? The quality of shoes they wear? The frequency with which attire gets replaced? So much for uniforms reducing differentiation based on socio-economic status!

Uniforms also encourage conformity. By being one in a sea of uniforms, difference and uniqueness is shushed and quashed by higher powers. Uniformity in appearance breeds uniformity in behaviour, attitudes, ideas, thoughts, and values. Students learn that being one among many is the desired behaviour; it is wrong to stand out in any way. Who will stand out and stand up for what they believe in when it is important to go against the crowd?

Enforcing authority
Perhaps the most frightening and disturbing effect of uniforms is how they lead to citizens who do not question authority. By enforcing the rule when children and parents are not involved in the decision-making process and have unwittingly and unquestioningly accepted the norm, one is passing on a message of ‘ours is not to question why, ours is but to do and die’. By leaving absolutely no room for rebellion and/or any critical engagement, the underlying message slipping into students’ minds is that those in power and authority are correct and must be obeyed. To give an example of an extreme case, a student who has never questioned his teacher might one day agree to a sexual favour because he cannot fathom disobeying his teacher.

Yet another way of enforcing and maintaining this authoritarian environment is insidious escalation of rules. For instance, a student might easily agree to wearing only long kurtis with jeans/salwar, the next step is to ban sleeveless kurtis, next to ban jeans, and finally students would be required to wear a full salwar-kameez, dupatta and all. This process was experienced by a friend when studying in a local college. When huge decisions are broken down into smaller steps, opposition is greatly reduced. One is eventually caught by surprise at the sudden big change. These are various ways of enforcing authority through something as simple as uniforms.

Group dynamics
Uniforms create groups. They do so by creating visible differences between individuals. Many have argued that uniforms reduce differences and reduce bullying and prejudice. At very best, this may be the case within a certain school, but uniforms perpetuate enmity between schools. The more a student identifies with his/her school, the less he/she identifies with other schools and the other school students slowly but surely become the enemy to be bullied, hated, and tortured. This is the result of ingroup-outgroup interplay, which causes members to over-identify with own group members breeding prejudice and hostility for other group members (ingroup favouritism). Is the purpose then to reduce violence only within one school’s courtyard or is the purpose to reduce violence in the world?

Within groups, one must be aware of group dynamics that are powerful forces influencing individual behaviour. When in a group, the dominant group behaviour is strengthened to an extreme position. Group attitudes and values are adopted, internalized and polarized by members. When these group attitudes are negative, they snowball into terrifying outcomes like violent mobs, riots, and lynching. It is worthwhile to remember that anyone in a group is susceptible to various levels of these effects. Bullying and ragging might escalate to extreme levels, all because of one’s attire. Members of the Ku Klux Klan drew immense power from their uniforms that ensured similarity and anonymity. It is said that upon wearing the uniform the individuals underwent a near Jekyll-Hyde transformation at times.

If one looks closely at uniforms for men and those for women, one will find that more often than not, uniforms encourage sexist attitudes to clothing. Women are attired only in (usually long) skirts or salwar-kameez/sari and men in pants/jeans. Uniforms and dress codes promote existing conservative norms for dressing and stereotype the sexes. LGBTQ preferences are completely ignored, at least in India. This is not a minor problem.

It seems redundant to point out that the purpose of uniforms is to maintain uniformity. Uniforms exist to maintain discipline and reduce distraction; uniforms are needed to reduce discrimination and indeed to eliminate differences. However, what do they actually end up causing? Uniforms cause increased levels of violence, hatred, competition, discrimination and prejudice; they breed armies of conformists – unthinking, unquestioning citizens; they reduce an individual’s self-esteem and induce dependence; opinions and stands are polarised and written in stone leaving no room for engagement… It is true that uniforms have some positive benefits, but those can be brought about through other means. The negative effects of uniforms that cannot be prevented are much too damaging and must be avoided. It is time to stop for a minute, fight the conformist tendency, and rethink the policy on uniforms.

The author currently teaches psychology at Tata Institute of Social Sciences, Hyderabad. She can be reached at binit.kaur@gmail.com.