‘Wherever you go, we follow,’ purrs the male voice for a network service. The ad just about sums up the kind of life we lead today. People have means of keeping tabs on our every move; there is no getting away from it all. Thanks to the ubiquitous cell phone, we have been reduced to a welcome doormat; we are available to others 24/7. People are often heard using juicy adjectives when the wretched instrument rings, but are reluctant to switch it off, lest there be an ‘emergency’ (imagined or otherwise).

Life in the 1960s and early 1970s was so much simpler. People stayed in touch with others not through Facebook, Twitter, or the cell phone, but by actually visiting each other. Weekends were a time when you visited or received people. As not everyone was the proud owner of a phone those days, these visits were usually unannounced. Friends and relatives would ‘take a chance’ and drop in at odd hours of the day and spend a couple of hours with you. Visitors seldom walked past the threshold of your house with a sense of trepidation, since people then were generally happy to play the role of the host. Things changed in the late 70s and early 80s when television invaded our homes in a big way. Weekends meant watching the serials and the Hindi/regional film shown on the only channel available. If you visited a friend unannounced, you were made to sit with the rest of the family and watch the film/serial, whether you wanted to or not! 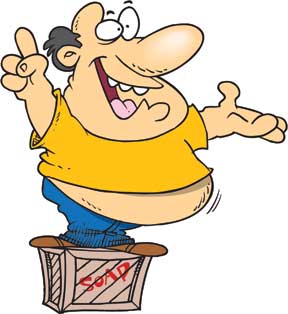 Nowadays, of course, we have serials on all days of the week, with each channel broadcasting more than one every day. The media constantly refer to these serials as ‘soaps’. Any idea why they are called so? ‘Soaps’ or ‘soap operas’, as they are sometimes called, existed even before television came into our lives. The original soaps were broadcast on the radio; these melodramas with their slow moving plots were broadcast in the afternoons on all weekdays, and were targeted at housewives. Even today, in countries like America and Canada, soaps like ‘Bold and the Beautiful and ‘Guiding Light’ are broadcast Monday through Friday in the afternoons. Since the audience for the radio drama was mainly housewives who were taking a break from their busy schedule, the sponsors for the show consisted of companies that manufactured products that appealed to the gentler sex. As luck would have it, during the early years of broadcast, the main sponsor was usually a company that manufactured soaps and detergents! Makes you wonder what such serials would have been called if the main sponsor had been a company that manufactured toilet bowl cleaners! The word ‘opera’ was tagged on to ‘soap’, not because the characters in the early radio drama burst into song every now and then, but because the plot was so highly sentimental and complex, it reminded people of the opera. Hence the term, ‘soap opera’. The term was adopted by the television industry when it started to produce and broadcast such programmes. Although not all ‘soaps’ these days are sponsored by companies that manufacture soaps and detergents, the term continues to be used to refer to such programmes. In most western countries, soaps are still broadcast only in the afternoons.

We generally use soap and detergent to keep our body and clothes clean. Now ‘clean’ is not a word that we would normally associate with politicians – which perhaps explains why our politicians are better known for their ability to use the crate in which the product comes, rather than the product itself! Politicians, the world over, are sometimes referred to as ‘soapbox orators’. In the old days, when people wished to make a speech in a place of public gathering, they usually stood on a wooden box and spoke. They did this so that everyone in the audience could see them. The wooden box, which served as a makeshift podium, was called a ‘soapbox’, and people who stood on one and gave a passionate speech on something that was close to their heart were called ‘soapbox orators’. Immediately after 9/11, whenever George W Bush appeared on TV, what did he talk about? Terrorism! It became his soapbox, his favourite topic. Presently in India, Anna Hazare’s soapbox is ‘corruption’ and that of Rahul Gandhi’s is the contribution of his family to the growth of the country and the Congress party.

Soap users know that the more you use a bar, the more it dissolves and the smaller it becomes. Sometimes, it becomes so small that we find it difficult to hold on to it. What does one do with the small piece that remains? Some people just throw it away. Others attach it to the new bar of soap that they are going to use. This process of attaching a small piece of soap to a brand new one is called ‘soap grafting’. Certainly cheaper than hair grafting, don’t you think?