Homi Bhabha Centre for Science Education was recently involved in a project titled Science Education for Diversity (SED). This was an international project funded by the European Union’s FP7 programme and initiated by the University of Exeter. It involved six countries – the UK, the Netherlands, Turkey, Lebanon, India, and Malaysia. The project aimed to understand the role of science education in addressing the mosaic of diversities in each of these countries and to design new approaches to address this diversity through science.

What has the learning of science or for that matter any school subject got to do with the diversities present in the classroom? Most of us consider our heterogeneous classes in schools as homogenous realities where the differences in terms of gender, religion, culture, socio economic status, etc., are not acknowledged. The Indian education system subjects all students to the same uniform curriculum and textbooks which do not pay attention to the diversity in the country (Chunawala & Natarajan, 2012). Hence, we do not expect diversities in the classroom to affect learning in any way. However, literature suggests that when students from diverse cultures come to school, they bring with them an already constructed knowledge base, which includes their cultural experiences as well as the values they learn from their family and community life. Their experiences may at times differ or be antagonistic to what they learn in their classes. These differing experiences could be barriers to learning. On the other hand, congruence between what they learn in school and what their cultural experiences tell them could lead to learning becoming more meaningful. 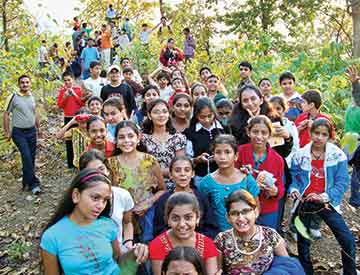 Some pertinent findings of the project
One phase of the SED project involved studying the views of science teachers towards diversity. Eleven science teachers from secondary schools of Mumbai were interviewed for the purpose. Most of these teachers stated that they did not make any adjustments in their teaching to account for gender, religion, or cultural differences amongst students. They felt that as teachers they should view all students as equal. Thus, they contrasted diversity with equality and felt that focussing on the one would affect the other. One of the teachers stated, “For me they are all the same; they are children – not boys or girls.”

In our study, teachers were also asked to respond to a situation where a pupil felt that what was being taught in class was contradictory to what he/she had learned from his/her religion. Most teachers reported that no such occasion arose in their classrooms. When asked to respond to a hypothetical situation, most teachers (8 out of 11) said that they would simply emphasize the scientific facts over religion. Some of the responses given in this regard were, “I will give him/her the facts…”, “…satisfy him/her that the information gained through religious beliefs is wrong…”, “…that he/she can take something from science also…”

It is clear from relevant research literature that these views of Indian teachers need to be challenged. Gay (1994) states that if the schooling process requires that in order to attain success in schools, students from different cultures should set aside their cultural habits or that the school adopts one cultural model while excluding the others, it leads to problems as the students feel alienated and caught between different worlds. It is important that teachers understand that student learning differs across cultures and they design “culturally relevant pedagogy” (Gay, 2000; Ladson-Billings, 1994).

Pedagogical strategies teachers can use to address diversity
Our classrooms mostly follow Initiation-Response-Evaluation (IRE) sequence for evaluating the monologic teaching that happens.

Non-respondents or those who give deviant responses are ignored, rebuked, or asked to repeat after another student gives the correct reply. Rarely are attempts made to probe into why there was no response or response of the type that did not conform to textbook boundaries. These patterns leave little opportunity for students to ask or pursue their own questions and they accept knowledge at its face value.

An intervention was planned as part of the SED project and implemented in three secondary schools of Mumbai. This intervention was based on a theoretical framework that used the following strategies to address diversity. 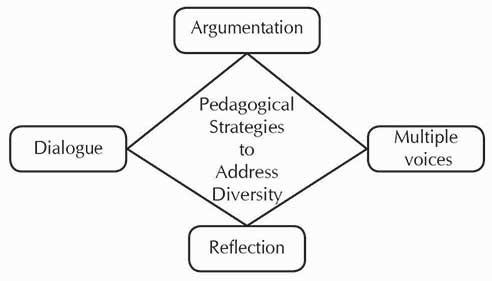 Teaching for and through dialogue
In Indian classrooms, as possibly in most classrooms around the world, there is an absence of dialogue. The teacher talks and students listen and respond individually or in chorus, only when questioned. To teach for and through dialogue implies that the teacher creates an environment of open participation wherein students are encouraged to talk, give alternative views, pose questions and respond in relation to the topic of discussion. This is a collaborative pursuit of knowledge, where the dialogue is not only between students and the teacher but amongst students as well. The emphasis is on student engagement and discussion that facilitates learning rather than on getting the right answer. Dialogue can be guided to be exploratory and interrogative, and this will help students express their ideas which may have roots in their daily life experiences and familial contexts. The teacher has to convey to students that everyone’s contribution is valued and not be judgmental. Such a dialogic classroom can contribute in developing respect and concern for each other even in the face of rejection of ideas or disagreements.

Argumentation: Arguing with an authority figure, like the teacher, is viewed negatively in Indian culture. A pre-intervention questionnaire given to students in this project indicated that most students had never argued with their teacher even when they had doubts or a disagreement regarding what was taught in the science class. Argumentation has advantages; it can provide students the opportunity to state why they support a claim, convince others, raise questions, consider others’ views, and recognize aspects that they did not know. Debating with fellow students and teachers allows the student’s own implicit views to become explicit and to develop, thereby making it possible for their voices to be heard.

Responsiveness to multiple voices: The emergence of multiple voices is essential in a diverse classroom mainly because students have innumerable experiences as well as alternative conceptions of the world around them. A teacher can provide a platform for all these voices of students to emerge in the classroom. The absence of such a platform where students can raise queries and counter-arguments can lead to inner conflicts within students that can in turn affect the quality of their learning. 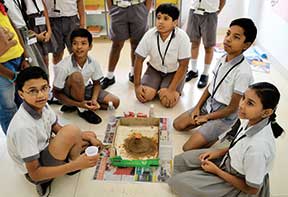 Reflection on ways of knowing as well as on one’s own thinking and assumptions: As practitioners, teachers need to reflect on their own ideas, beliefs, and conceptions regarding learners, learning, and the content matter. Dialogue with students, argumentation, and the multiple voices of students can pose challenges to teachers’ ideas and beliefs and also create an opportunity for reflection.

Example: Topic of evolution
Students have alternative conceptions regarding life on earth, which may be largely guided by their cultures and religion. At times, these conceptions may be antagonistic to what science says. Simply giving them the scientific explanation without exploring their previously held ideas can lead to the following situations:

The teacher can, while teaching such topics, adopt a dialogic form where students openly express their beliefs and held notions, they take stands and argue, they reflect on their own thinking patterns and that of the others so that they are able to make realistic connections with their everyday world and cultures. In such ways meaningful learning takes place.

Conclusion
The school curriculum has to be closely interconnected with students’ everyday experiences. If students do not express their disagreement or concerns, their doubts are likely to be ignored and remain unaddressed by the teacher. While planning lessons teachers could critically reflect on the content and how it relates to aspects of diversity among students. Since it may not be possible for a teacher to understand the sum of diverse views that students hold, deliberate attempts to elaborate the connections of the content to diversities in the classroom through discussions, dialogue, and argumentation will help. In fact, such a diverse and open classroom is a rich learning environment, as it creates opportunities for varied ideas that need exploration and investigation to flourish.

Pooja Birwatkar is a teacher educator and currently pursuing post-doctoral fellowship from Homi Bhabha Centre for Science Education. She can be reached at puja1410@gmail.com

Sugra Chunawala is Associate Professor at the Homi Bhabha Centre for Science Education and is interested in social aspects of education. She can be reached at sugra.chunawala@gmail.com.