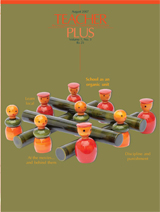 I was once the class teacher of a group of students who will, for all time, remain the best of my teachers. The class consisted of a group of individuals who could respond to the learning process as one social organism. Here are a couple of incidents involving this class. Incidents that never cease to teach me.

Megna* was a brilliant student. By all parameters she belonged to a different league as far as academics went. She was also very artistic. Nevertheless, she was a rather inward and reticent person. Never eager to stand in front of a crowd, she was rather uncomfortable drawing attention to herself – an endearing trait by itself since most people with half her qualities would make a song and dance of it. As a child she entered school with a lot of mistrust; an earlier experience of a teacher being rude to her classmate had made a deep impression on her. As years rolled by she blossomed into an amazingly insightful person. When we were in class seven, we worked with a humorous play about Archimedes. The class was busy discussing roles and planning parts. To everyone’s surprise Megna volunteered to play the part of Archimedes. Very unlike the girl we’d known all those years. As if on cue, the other students, even those who were highly gifted in theatrical skills, stepped back and encouraged her to take it up. They were truly delighted that she was pushing herself beyond her comfort zone. Needless to say the play was a hit and will remain etched in my memory for more than one reason. 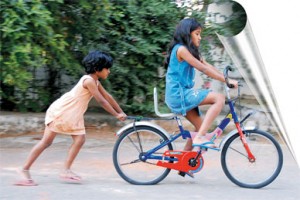 Akshay* was a very scared and meek child. In class two we went to a park nearby. It seemed a busy day with a group of children from another school too visiting the park. The class wanted to play on the slide and quickly lined up. The children from the other school too joined us but some of them lacked the patience needed to wait for their turn. They soon found the easy way out. Some children sensed that it would be easy to push Akshay around and move past him – which simply left him stuck in the line – till one of his classmates noticed. Quick meaningful glances exchanged with other classmates seemed to create greater awareness of the situation. Without any explicit strategising one student from the class stood in front of Akshay and the other behind him – no black cats could beat this security around Akshay who was no more denied of his rightful privilege of sliding! What struck me was the dignity of it all – no fights or foul exchanges. It was a spontaneous solution to the problem of the moment.

At a time when competition is justified by sugarcoated terminology like ‘healthy competition’ and so on, these incidents help me redefine the word ‘Success’.

As a teacher who had questioned many aspects of education it was inevitable that I wanted to belong to a place that could make such working dynamics possible – both for the children and the adults – after all the one cannot be without the other. Did my search end?

A school is by necessity a collection of individuals – which is a great starting point. The word ‘individuals’ is worth pondering over. Juxtaposed with the word ‘herd’, it opens up connotations of uniqueness, empowerment and a certain awareness of the self. It is really a gifted school that can boast about a group of individuals carrying forth the educational task! And true individuals will obviously choose a workplace that nurtures their freedom. This in turn would mean people who would not toe the line! Structures that are not pyramidal. Groups that value freedom by embracing the responsibility it asks of them. Without a group of individuals an organic whole is impossible. They are not contradictory ideas, only complementary.

I once met a group of teachers from Chennai. They were reminiscing about their meetings, top on the agenda of which was whether or not to mow the front lawn of the school! They were fondly thinking about the strong opinions shared in the meetings for and against a seemingly trivial question. The question itself is immaterial. The process of hearing out everyone and dealing with perspectives different from one’s own is an end in itself.

Challenges are inevitable. The more the messier! What happens to decision-making? The time it takes? The confusion? Issues of leadership, roles and responsibilities?

An inner commitment to a non-hierarchical way of functioning usually helps us create processes that can meet some of these challenges and reveal the core intent of the school. If there is one way of working that I’d never trade for anything as a teacher, it is the freedom to fight! Anyone who fights out of convictions will not find it difficult to respect another’s conviction however different it may be! The art of keeping a fight from interfering in personal relationships is to stay focused on the ‘issue’ in question and not slip into the person or people who hold a different opinion. When the starting point is a celebration of different ways of thinking and approaching a question, the end result would certainly be enriching. Thoughts that never quite strike us become part of discussions and we may gain a whole new understanding of the question in the process. The decision evolves naturally and there is nothing that is ‘forced upon’. With crucial questions we sometimes go through a two-step process of ‘brainstorming’ on one day and ‘deciding’ on another. Often, this leads to consensual decision-making. Where a consensus cannot be reached, the transparent decision-making processes make it possible for every one to support ideas even if individual opinions differ from the final decision.

Functioning, thus, does not mean there is no leadership. ‘Leadership’ is viewed with some suspicion since it is often confused with traditional power structures – or worse – hidden and not so obvious power dictated relationships – something that can break the zest of free individuals and make a mockery of institutional values. Understood appropriately, leadership can be inspirational and capable of ensuring that everyone is involved in these processes. A real leader knows when to charge forward – like the children protecting Akshay… and when to hold back – like the children in the class allowing a new facet of Megna to emerge. In both instances ‘success’ was a shared experience and therefore, cherished by more people than one. As a teacher I find the same joy when I work with adults where ‘success’ becomes a shared experience. Any failure then is also viewed with collective responsibility. The pettiness of pointing fingers is thus replaced by the culture of earnest introspection and learning.

One of the serious threats to working this way is hidden undercurrents of power – it is easier to work with manifest structures of power than these. This is very often the result of personalities desiring to take space, a lack of respect for collective wisdom and plain hypocrisy. Hypocrisy bares its naked ugliness not only to adults who work together but also to children who sense it. As a result children experience erosion in respect for adults. For, they sense the lack of genuineness beneath the facade of ‘being nice to one another’. Among adults it can lead to miscommunication, forming of cliques and a tendency to brush issues under the carpet. A serious threat to the morale of the group – one of the most effective antidotes to such a challenge is ‘transparency’. When a non-judgmental atmosphere is created and sustained, there arises greater openness among the adults. Once the light of transparency is allowed to fall upon issues, the darkness that thrives behind our backs is confronted. Confronting darker aspects fearlessly and learning from them makes every experience meaningful.

One of the most practically helpful guidelines we have at school is to use the meeting table to thrash out issues. A weekly teachers meeting ensures that issues are taken up and rounded up. As part of our work culture we make sure that discussions do not drag beyond accepted forums of discussion. Within the forum there is complete freedom to opine, argue and differ with equal responsibility of listening to other opinions, arguments and different perspectives. Care is taken to ensure that differences in ideas do not dwindle into differences among individuals. While in ‘thinking’ a group often experiences individuals as separate entities, in ‘doing’ a group bonds as one organic unit working towards a common goal. Hence, our meetings always include creative hands-on activities like painting the school, working in the garden or decorating a colleague’s classroom. A progress from ‘me’, ‘my’ to ‘we’, ‘our’ is thus experienced at a deeper level of our being.

An important aspect of working together as equal partners is self and peer evaluation. Every year we go through this process of trying to view ourselves with some objectivity. The parameters include not only aspects that impact our work in the classroom but also our growth as individuals and our contribution to the growth of all the colleagues. It sets a mood for frankness, critical opinion and an understanding of limitations. More importantly it creates the possibility of group support towards individuals; this means striving to rise above limitations in order to give the best to the children.

A meditative way of working also helps in the smooth functioning of the group. The term ‘meditative’ is used to indicate a culture of pondering with some depth about any question. We once did an exercise of sharing our biographies with the group. It called for great trust in the group’s ability to carry the sanctity of many intimate aspects of our lives. The exercise left us with great respect for every colleague. It also brought forth a greater awareness of the void that would be left even if one individual were to leave us. At a time when professional demands often treat people as if they could be replaced, it takes a shift in paradigm to realise that by virtue of being human, no one indeed can be replaced.