“My children? Oh, they’re busy playing on the mobile, not much bothered about the online assignments from school….”

COVID-19 has suddenly made online education a most discussed subject, making even the biggest pessimist doubt if school education in the country is all set for the long-talked about transformation. For a nation which has prided itself in providing IT brainpower to a large part of the western world for the last two decades, why did it take so long to evolve interventions for making schooling a purposeful phase of the Indian child’s life?

Where did we miss the bus?

Memories flash before my eyes…

1973: The four Indian metros had received a welcome I-Day gift on Aug 15, 1972, with Doordarshan commencing evening telecasts on black and white TVs. As students of journalism, we were on a visit to the Overseas Communications Services (OCS) centre of the I & B Ministry in the city of Bombay. It was only at OCS that we first saw a colour TV programme. ‘When can we get a colour TV in India?’ we asked. ‘Would Doordarshan beam at night the World Cup football going on (somewhere)? Promptly we were reminded of PM Indira Gandhi’s clear words when Doordarshan was launched – “Colour TV programmes are not a priority for a poor country; we must first make sure that the whole nation receives the benefits of television services. And that television will be used extensively to improve school education.” We nodded in agreement – urban India must feel for its less privileged rural masses before looking up to the moon for more.

1975: Our dreams came true as the SITE telecasts (Satellite Instructional Television Experiment) began in select villages and towns across central India, beaming programmes directly onto satellite-linked TV sets installed in public places. Thus the common people in these places had free and direct access to watch a range of television programmes on issues related to their lives: agriculture, health, weather, environment, school education and light entertainment. Public response to SITE programmes was enthusiastic, even with frequent failures in connectivity, equipment breakdown and sometimes doubtful content relevance and quality. Sadly, SITE telecasts ended in 1976, as it was dependent on an American satellite provided to India for only a year. Many of us felt deeply disappointed that SITE did not reach students in all states. I wonder if the educational materials produced during SITE were telecast later by Doordarshan centres to target schools.

Was there any other educational television intervention in the later years that created such public enthusiasm? Educators, TV fans and readers could perhaps throw more light.

1980s, NE India. Colour TV had arrived with great fanfare in all major Indian cities on Oct 2, 1982. Even in the north east we could access DD programmes though it meant installing a large expensive ‘disc’ and a lot of acrobatics with long wires. TV sets were still beyond the reach of the common man and cumbersome to maintain. Most schools did not think of procuring a set, considering the frequent powercuts in the 1980s and 90s. Many private residential schools however did set up one, but showed only a routine Sunday film or ‘serial’ – they hardly had any choice with powercuts hanging like a Damocles’ sword. Even if a school thought of screening the ‘evening’ English news to give students exposure to spoken English, it was too late an hour; 9.30 pm for people of the NE and for students across rural India is almost midnight! We wondered why educational planners never thought of using DD’s English news as a tool to provide valuable listening exposure to the language. 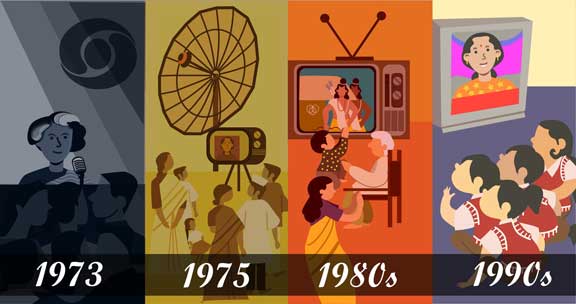 (What the planners didn’t try, the Hindi film and video-cassette industry did admirably: Hindi rapidly gained lingua-franca status across the entire NE communities by the late 90s by a people’s enterprise! Hundreds of tiny ‘VCP – theatre’ huts that mushroomed in the hamlets on hilltops started screening day and night, the latest Hindi films released in Bollywood! The VCPs ran mostly on petrol gen-sets and the viewers paid Rs.5/- for a show. Teaching spoken Hindi was never easier! (A change worth researching by educationists.)

A group of residential schools in Arunachal Pradesh, of which I was a managing team member, firmly decided that we will not procure TV for our schools and bring on a head-load of problems. ‘Let Doordarshan start educational programmes,’ we told them. Then, during the International Youth Year, 1985, two of our schools got a gracious gift of a TV from the army units nearby. ‘Why not us?’, queries started from other schools. ‘Let’s see’, we were non-committal.

Came 1987-88, and ‘Ramayana’ started telecasting on DD on Sunday mornings and later the Mahabharata. Now the clamour got louder! Friendships, cooperation, teamwork everything could be endangered, if one didn’t own or favour a TV! We quietly nodded assent, still wishing TV would soon become an educational tool.

It was then that we came to know of the EMRC Pune telecasts. Screened from Monday to Friday 1 pm – 2 pm, it was wholly educational. The Educational Media Research Centre (EMRC) programmes of the Pune University were for college students, but like SITE, they covered several subjects in English and Hindi. Some were quite interesting for school students too and others for teachers.

Excited, we directed the schools to screen EMRC shows as the students had their noon meals. Here was classroom learning made appealing to the Arunachali students in villages, who had not even seen a train! Overriding all objections, the screenings went on for a few years. I always watched them with the students, whenever I visited one of our schools.

Did the students benefit from these telecasts? It will be interesting to find out after nearly three decades.

But EMRC shows did benefit our schools in an unexpected way. A telecast that caught our attention was a presentation by (late) Prof M. R. Bhide on “vermicomposting” on cultivating earthworms to produce enriched manure! ‘Look at the immense benefit it could add to rural residential schools with shoe-string budgets, struggling to procure fresh vegetables!’ We immediately wrote to Prof Bhide inviting him to Arunachal. To our endless joy, the professor very graciously accepted our request. His training sessions for our staff and nearby villagers were highly successful; we had a handsome increase in crops that year! We also felt elated that we were involved in introducing an agricultural innovation in our state, all from watching TV!

Soon after, this writer moved out from the arena of school education. It will be interesting to learn how subsequent major educational serials by DD were used for strengthening classroom learning – “Turning Point” by Dr Yashpal on popular science, “Bharat Ek Khoj” on Nehru’s ‘Discovery of India’. Did educational agencies like NCERT, CBSE or the state school boards use them?

As we listen to governments promoting online learning during the coronavirus crisis, the call for using TV as a medium sounds quite feeble. How sad the TV media wasn’t directed to reach out to schools during the last two decades! Today cable TV has the largest network providing TV content even in the remotest areas of India. Has the government tried to rope them in telecasting learning materials? If not, the time has come for cable TV companies to do their CSR bit. And TV is far more accessible and suited for supplementing classroom learning across India. Not just pedagogic content, but related resources that can stir the learner to explore beyond and make learning joyful, inspiring, and purposeful.

Indira Gandhi’s government gifted us a tryst with television. It is time now to redeem it.

The author is an education and library activist with four decades of close association with the Arunachali youth. He can be reached at lohit.libraries@gmail.com.