“There is no distance in childhood: for a baby, a mother in the other room is gone forever, for a child the time until a birthday is endless. Whatever is absent is impossible, irretrievable, unreachable.” – A Field Guide to Getting Lost, Rebecca Solnit

Procrastination is often a challenge of working with the abstract. To imagine “what will be if only…” is an engagement in fantasy, for what is not yet present is merely imagination. One needs to imagine, to visualize what will be, the future, the goal and then identify how to get there along with the why. Often, the adult has no view of the end result but merely knows that step 1.a. must be completed. These well-meaning adults, including teachers, either are unaware or couldn’t care that step 1.a. is part of the some 903 steps to a goal that one wishes for the student. But is it a goal that the student cares about or even understands and values?

The first time I decided to deal with procrastination, I approached it like a mathematical problem or an algorithm. That approach worked for me. I had data, estimates, timelines, schedules, countable steps to completion and much more. I realized it didn’t work for many others. Then, several years later, I decided to take a simpler approach of simply observing procrastination, both in the person exhibiting it as well as in the person who deems it so. Left to each person’s judgement and agenda, it seemed that procrastination was less frequently observed. Left to oneself, a task can be completed whenever (unless someone would die if not done by a particular time), whenever we truly needed something is when we needed to perform the task – life would be very close to being a response to bodily needs and whims. It nevertheless becomes something to grapple with when people try to reconcile their energies with the agenda of external frames of references – family, peers, age-based-goals, societal, etc. 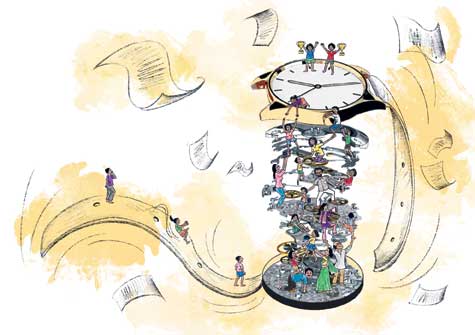 When my parents keep praising that kid in my class/neighbourhood for being so good and achieving so much, I might be shaken out of my stupor to alter my ways in order to be better than that kid and redirect all praise towards myself. If I want my favourite teacher to always praise me and show me off as a shining example in her class, I will complete all work on time. If I held a goal of clearing an entrance exam so that I may become a qualified professional who can enter the market and earn tonnes of money, so that I am held in high respect as Mrs. Banker is, then I might commit myself to studying eight hours per day and clear the exams. In other words, if I could get what I want without worrying about what I did or did not do, then I would not be viewing my behaviour as one of a procrastinator.

When I started working with students, I reverted to the algorithmic approach. They were fascinated by the detail of the plan I designed for each of them. They whispered about the mad genius of it all. They were energized to do it and fulfil the project. Then they went home and domestic life embraced them in its unplanned yet effective manner. My plan lay in their book as a mark of a fascinating conversation that had no bearing on their lives.

In one of my interactions with students, I allowed my frustration to get the better of me. My frustration was a mix of not being able to figure out how to help students see the value in executing tasks to completion as well as the urgency of setting things up for them as they needed to get things right else their family’s poverty would swallow them. In the heat of that, I retorted “You kids barely seem to see or think beyond this weekend!” That is when it struck me – they indeed could not see beyond a few days. This was due to a variety of reasons – being overwhelmed by a goal, lack of role models who could represent what life would look like if goals were met, not knowing the immediate next step, not seeing immediate value/benefit, etc., I had to work with that.

Before I formulated my experiment, I held open discussions with a few students as well as studied some literature. Procrastination is often viewed as an intention-action gap – one claims to have the intent to do something but the actions belie that. I also realized that it was unclear or ill-formed intention that made the gap inevitable. Intention was not merely a mapping to the benefits of the goal but also back to visualizing a transformed life for the family. And this required periodic reconnection.

I wanted my students to realize the way their brains worked through not doing a task. I wanted them to observe their own procrastinating mind. So I got a couple of them to try a day or two of procrastinating but not on tasks that were required in school or by their program but on things they loved to do. For example, a student loved to chat on the many WhatsApp groups that she is part of. Another student loved playing Free Fire on his father’s mobile. I asked each of them to find ways to avoid doing these things that they loved. They could do anything else except these. I decided to place a reward on it as well. When they returned to class, they shared how difficult it was and how they began running out of ideas. A couple of them actually completed school work in order to stay away from their pet indulgences! One thing that was common was that they felt drained by the end of the day. 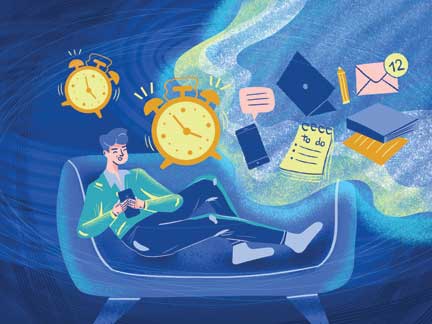 What emerged were the following learnings:
1. Willpower has a limit, especially of students.
2. Goals have to be much shorter term with periodic reflection.
3. Setting time aside for fantasy-indulgence.

In addition to these, there were some simple strategies that had to be baked in. I was also inspired by the TED talk given by Mohamed Jebara about “This company pays kids to do their math homework”.
1. Start the task by doing something, anything.
2. Gamification with peers helps – rewards and penalties.
3. Involve family.

Using these, I worked with individual students to help them craft a working plan to ensure that they were able to complete a significant portion of their task. They still couldn’t complete every single task 100 per cent but it was a significant improvement over their earlier completion rate.

The common pattern of the plan is worth sharing in case it helps people craft working plans for students under their mentoring.

Since the community was close-knit, it was easier to make this work. As practical breaks and realistic targets were set, the feasibility was more assured. I had also made it a point to ensure that no stakeholder will indulge in negative-talk but rather admit and accept an instance of procrastination and simply create a visible mark on the wall and continue with accomplishing the tasks.

I was volunteering at the school only for a short period. I shared this strategy with the headmistress and she agreed to continue this. Four years since, she still believes in this general approach and confirms that it works in most cases. It has also gotten more people invested in it. The team of teachers have innovated on the rewards schemes as well based on what realistically nudges all stakeholders to deliver.

The author is a computer scientist reborn as an educator who is passionate about returning education to its roots of curiosity and wonder. He served as the Dean of Academics and Emerson Chair Dean of STEM at Purkal Youth Development Society. Currently, he volunteers with educational institutions. He can be reached at anand.krishnaswamy@gmail.com.

A ride full of crests and troughs
Getting to the source: why we procrastinate