I used to work with Aseema, a non-profit organization dedicated towards providing effective educational opportunities to children from under-privileged backgrounds. The organization had been working with the Montessori approach at the pre-primary level for a few years and was now eager to introduce an activity-based learning approach inspired by the Montessori curriculum at the primary and upper-primary levels as well. The objective was two-fold, one, to provide the children with an opportunity to master the concepts studied in class through activity-based methods, and two, to encourage the children to explore beyond the concepts they had been introduced to in accordance with their interest areas. This new kind-of classroom was to be called the ‘Resource Room’ (RR). 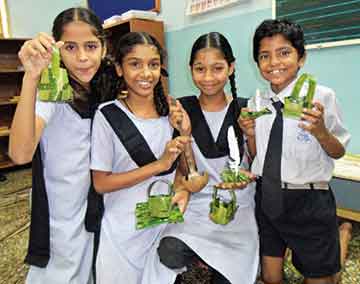 Setting the stage
Aseema offered me the opportunity to work as the ‘Resource Room Teacher’. While I intuitively knew that our children would benefit from a place like the RR, the question really was, “How were we to create such a unique learning environment?” In addition, there were many operational issues to deal with as well. For instance, how should we link work in the RR to the work in the children’s regular classrooms? Would the RR hour not interfere with the time required for completing curricular requirements? Together, the class teachers concerned and I talked openly about each of these issues. We were able to find satisfactory answers to some of our questions and decided to tackle the rest along the way.

Getting started
In June 2012, we opened the doors of the RR to the children of classes 5 and 6. The first couple of days were spent in familiarizing ourselves with the RR and talking about some work processes that we would follow. Each child, for instance, was expected to prepare a ‘work plan’ for herself/himself. The ‘work plan’ would extend across two weeks and list three specific tasks that the child would choose to undertake during those two weeks. Since all our children needed to strengthen their language and math skills, each child was requested to take one task pertaining to English language and another pertaining to math. The third task could be from any other subject-area, according to the child’s preference. The belief was that the freedom to choose work that they truly found meaningful, would naturally awaken a deep sense of commitment and accountability in the children, which in turn would make any learning that much more effective. Each child was also expected to keep a ‘journal’ to make a note of the task(s) she/he carried out, on a daily basis. We also decided to schedule ‘one-on-one discussions’ between myself and each individual child, once every two weeks.

Finding our feet
Slowly, the children started getting used to this new way of working. Getting to ‘choose’ their work, turned out to be a rather novel experience for most. Initially, some children would simply pick the very first activity material they laid their eyes on and some others would completely disregard their work plans by taking up other work altogether. Over time, however the children started making their choices with thought and deliberation. Some of them even started planning ahead, in terms of thinking about what work they would like to take-up in their next work plan.

The fact that in the RR, the children were free to take up a work of their choice helped in getting them more purposefully engaged with their work. And yet, it took time for the children to move from looking at work as something that needed to be ‘finished’ to finding real joy and meaning in the same. It required a variety of efforts, having persuasive conversations, patience with slow but steady progress, and very importantly committing myself to the very same standards in my own work. Slowly and steadily, the children continued to progress. For instance, initially I had to select books for them to refer to while they worked on some topic, as time went on, however they started to eagerly look for relevant reference materials on their own. 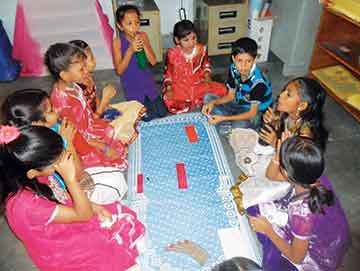 Although initially, the work plans were made on an individual basis, over time the children started to form ‘work groups’ based on their own choice of partners and started making their work plans as a group. This meant that now they had the option of choosing to do some work together in pairs or as a group and at the same time have the freedom to do other tasks on an individual basis. Watching the children go through this entire process of choosing their partners and settling down as work groups was a fantastic experience. The most beautiful part of course was watching them at work, watching them take up different responsibilities within their work group, watching them guide each other and support each other as only children can. They appeared to accept their individual differences rather naturally, without any judgement and they had a way of supporting each other in a subtle yet effective manner. The children worked together in many different ways, within their work groups, all together as a class, and even across classes. All of these experiences added to their understanding about what it takes to come together and complete a beautiful piece of work. For example, once the children of classes 6 and 7 worked together consistently over a period of four months, to create the school’s first-ever in-house newsletter ‘Funthusiasm’.

As time passed, the children started becoming active partners in the creation and sustenance of the RR environment. They contributed enthusiastically to our varied collection of objects and sometimes an unusual contribution led us towards a most delightful and educational project. The ‘Coconut Tree Project’ for instance, started with a five-inch high coconut fruit which two children happened to find on their way home, and eventually led the children to put together a delightful exhibition of different objects made using the coconut tree and also helped them learn about the parts, characteristics, and uses of the coconut tree.

At other times, the children contributed towards the running of the RR. Half-way through the first year of the RR, we conducted a simple feedback survey asking the children if they were learning new things in the RR, if they got to choose the work that they wanted to do, if they got to ask questions and so on. It was the children’s feedback in this survey that prompted us to form work groups in class and introduce new initiatives like the much-loved ‘I wonder box’, where children put in their questions on small slips of paper and then tried to find the answers with the help of teachers.

While at times we engaged ourselves with a specific subject-related activity or project, the children’s work often took them across subjects in a most seamless fashion. So, when they did their ‘Human Rights Project’, they touched upon history when they learnt about the World Wars; law, when they learnt about the relevant legislations; civics, when they tried to understand the complex reality of child labour; math, when they represented their survey data in the form of bar-graphs; and of course language, when they did their referencing, or conducted their neighbourhood survey, or made their presentation. 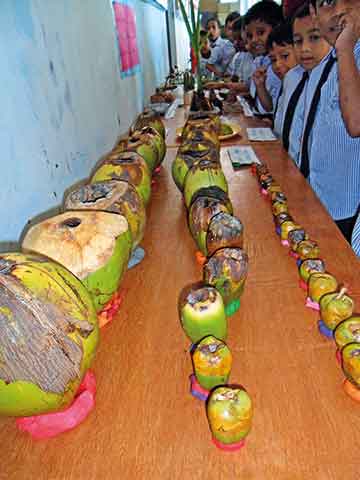 Sharing the bounty
By end of our first year in the RR, the children were very comfortable choosing material from the shelves and working with them in different innovative ways. Also, many of them were now consistently displaying a keen eagerness to seek newer challenges, all on their own. So the following year, the children were given the opportunity to do a ‘special project’ as one of their three tasks in the ‘work plan’. This ‘special project’ was to be completely their idea, their chance to pursue their own interests. As expected, very quickly, we had a range of ‘special projects’ going on in the RR – the seed germination project, the shadow puppet show on the life-cycle of the salmon fish’, the musical instruments project.

The one person, however, for whom this experience served to be the biggest learning opportunity was undoubtedly me. I began to understand what children were truly capable of given the right opportunities and I began to understand a little something about my own role in the classroom. I realized that as a teacher, my real responsibility was about creating and maintaining a positive and productive learning environment, and serving as a resource for the facilitation of the children’s work, as and when required. Nothing more, nothing less.

In hindsight, it seems hardly surprising that the children responded so positively to the RR. After all, the RR provided them with the most natural and free learning environment. Even so, it is to the children’s credit that they grabbed this opportunity with utmost enthusiasm and motivation. The fact that they came from an environment which was both, filled with hardships, as well as severely constrained in terms of resources and exposure, never once bothered them. It was their undying curiosity and easy acceptance of any challenge, which led us to create a most diverse, intriguing, and joyful body of work – way beyond the realms of any curriculum, way beyond I dare say, even our own imagination!

The author is associated with the Aseema Charitable Trust on a voluntary basis and works with children in the primary grades. She lives in Mumbai and can be reached at sonika.lakhera@gmail.com.

Aseema is a Mumbai-based non-governmental organization with a mission to equip children from marginalized communities with high quality, value based education enabling development of their limitless potential. I am grateful to Aseema for their overall support and for their permission to include some classroom photographs in this article. I am also grateful to the class teachers and other staff members at school, for their support, encouragement and contribution towards the creation and sustenance of the RR. To know more about Aseema’s work, please visit www.aseema.org.

The pdf version of the book, which this article is based on, can be found on Mr. Arvind Gupta’s website at the following link http://arvindguptatoys.com/arvindgupta/sonika-unconventional.pdf.

Mr. Arvind Gupta is a renowned educationist and writer. A recipient of many rewards and recognitions, he shares his passion for books and toys through his popular website http://arvindguptatoys.com I feel privileged to receive his support and encouragement, and remain deeply grateful to him for the same.