These days Facebook is replete with interesting reminders to its subscribers; it shares memories of a post and nudges you to re-post them just in case you still feel that way. One such post to which I was alerted was the poem, “The Suicide’s Argument” by Samuel Taylor Coleridge, which I had shared two years ago. It continues to haunt me, even today. Its relevance even more significant as the newspapers scream hoarse of more and more young people being depressed and many even becoming suicidal. The FB comments it invoked were from a wide array of people. One was from a wildlife biologist, who said even a (poetry) illiterate like him could connect; two others were ex-students, now young men in their twenties. One had graduated with a degree in commerce and was with an IT firm. To him, the poem was very touching. The other had just completed his Bachelor’s in Computer Applications and for him it was the sheer beauty as he could relate to the joyful possibilities of life. Both the young men had grown up in the slums of Mumbai, gone to municipal schools and were educated in regional languages, and are today confident to face the world as productive and socially responsible citizens. They were my students at VIDYA, a not for profit
(www.vidya-india.org).

That Coleridge could invoke such emotions long after he was gone, among people who lived in a land far away from his and spoke different tongues, had different palates, was simply the power of the word. And their (my students) ability to READ. Their ability to read the lines, between the lines, through the lines and let their hearts be opened to thoughts that stirred and gave them a voice too.

As they found theirs, I did too in stories and poems and in a journey called My Voice, My Verse a celebration with a book of poems written and illustrated by the children of VIDYA It was a huge privilege to be part of its making with other teachers and children who created magic. The magic came in as poetry was celebrated at the VIDYA Annual LitFests. It came in with rhymes, with rhythm, it came in free verse. And most of all it happened because teachers created safe spaces for democratic voices as they gently nudged children to express freely. No right, no wrong, they said.

One such poem that figures in the book My Voice, My Verse is Truth. A cinquain, it has a story behind it that I was privy to. This was a class poem, which was the outcome of a poetry class on Truth by Barrie Wade. This is part of the coursework for the open school students. (The VIDYA Open School Program facilitates completion of schooling for those students who have had to drop out of education due to socio economic constraints. Most of them have been out of touch with formal education and face the challenge of also working full time and coming for classes in the evenings.)

The teachers had very thoughtfully made groups and each group was assigned a task the day before. Some were asked to do some research about the poet, some to find out the central idea of the poem. As very few had done the assignment, the teachers while legitimately disappointed, created a silent reading opportunity and drew out the students into a discussion to predict what they thought the session would lead them to.

I then saw two group activities that were taken up, each of the groups had to list out the hurt/impact of sticks and stones. Another was a case study from the text and each group had to work on the positive and negative impact of the situation. Having engaged the students to experientially connect with the gist of the poem, the reading began. We read it, with emotion and expression. Aloud and together as well. Point and read – shared reading at work! 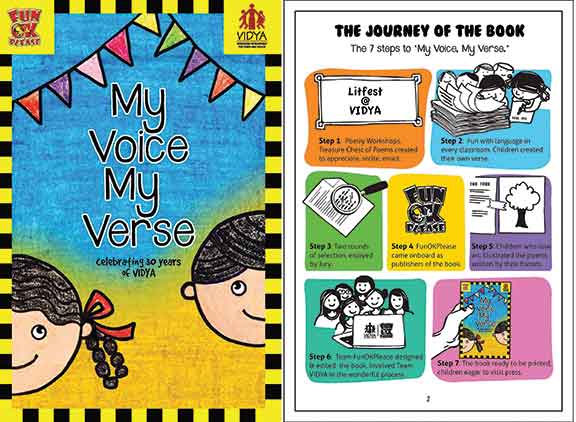 Now in the groove, the students animatedly began the discussion and appreciation. The first stanza just required them to understand and use metaphors. The second dwelt on alliteration! We began with the age-old classic, “Betty bought a bit of butter, but the butter was bitter, so, Betty bought a bit of butter, to make the bitter butter a better butter”. We read it with speed and went into smaller ones like Mickey Mouse, Donald Duck and moved on with each student creating some alliteration for their names. Sundar Sunita, Wonderful Walter, etc. And then the class sang out Khadak Singh Ke khadakne se Khadak thi hai Khidkiyan… from the song, Chanda chamke cham cham from the movie, Fanaa. How beautifully the song helped bring home the concept of alliteration to the children. This was one vibrant class and whoever called them dropouts youth was wrong. These children were engaged. Engaged with life and learning and poetry. They were all in a world of words. The students moved on to exploring the use of repetition as a literary device and read independently and those who had difficulty were helped by teachers and peers. They closed the session with a reflection, why the poem was titled Truth.

We then moved on from Barrie Wade’s Truth to creating our own class poem. Word bubbles scrambled all over the board for space as voices emerged. Students shared the qualities of truth, the action words they could think of related to truth, feelings associated with truth and a synonym for truth – the board was full! We distilled it and this is what emerged

It was most amazing for me to have this outcome. After this was created, we looked at technical rules for creating cinquains.

At the end of the class, truth was revealed to me by the students. As I saw their joy of creating free verse and to see it come alive in a book, where it can be read and enjoyed and celebrated by all makes my journey as a teacher most fulfilling.

The author is Volunteer Mentor and Academic Committee Member at VIDYA Mumbai. VIDYA (www.vidya-india.org) is engaged in educating and empowering the less privileged through integrated methods and initiating and implementing progressive social change. She expresses herself through poems and enjoys travelling. She can be reached at jayshree.murali@vidya-india.org.