They quietly filed into the library and took their seats. They cast a tired eye on the thin pile of books laid out for them. Each one got to pick a book. The first winced at the sight of what seemed to be an often-repeated pile of books. The second announced he’d already finished reading all the story books! The next one reluctantly took a comic book and flipped pages – from the last page to the beginning. Another demanded books with more pictures.

This was my group of class IV students in a local English medium municipal school in Mumbai. I was new to the school but it wasn’t difficult to guess that for them, story reading was a boring, meaningless task. They endured the library session sifting through pages, looking at pictures while mostly talking among themselves in Hindi. I realized that I had to take them into the world of stories by bringing a story to life. I pleaded with the librarian to allow me to whisk the group of 15 children outside the “quiet zone” of the library. 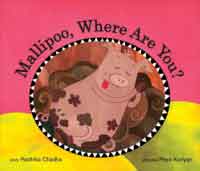 I chose Radhika Chadha’s story Mallipoo, Where are you? published by Tulika books. The beauty of the book lies in the simplicity of its narration and the excellent illustrations. Paytu, the pig and Amma, the elephant go off with Hutoxi, the horse to the sugarcane fields. Paytu’s little piglets are left to the care of Akka and Anna, the elephant siblings. With their mother gone, Akka and Anna get busy in a game of coconut football with Bahadur, the monkey. And in the meanwhile the piglets go missing, including Mallipoo, who is the cutest of the lot.

Getting the children interested and involved was my first challenge. We began with a simple task of picture reading and predicting possible plots. Before I began reading the story aloud to them, I introduced the characters using the pictures in the book. The moment they heard the word “Amma” a few ears pricked up. When I proceeded to “Anna” and “Akka” I sensed some excited whispers going around. I stopped to ask them if they wanted to share something. And of course, it was the names! Some of them said that Amma, Anna and Akka were words that belonged to their own language. They excitedly told me that in Telugu it meant Mother, brother and sister. They were surprised to find out that it meant the same thing in this story too. We immediately had a round of sharing where the other children gave words from their own language for mother, brother and sister. We had “aai”, “ammi”, “Bhaiyya” and “Bhaau”, among others.

Someone in the class remarked, “Don’t some of the words sound the same in different languages?” My heart stopped! My class was constructing knowledge about something very fundamental – most Indian languages have a common origin. But I raced ahead with the story, lest I should lose their interest. They speculated, laughed, wondered and worried about Mallipoo through the pages of the book. It was a hit, with all the children hanging on to every word.

Just as I thought the session was over, one girl who’d been quiet so far, timidly raised her hand. She had a glint in her eye when she told me in Hindi, “Teacher! I think I know why the piglet was called Mallipoo.” The name Mallipoo had amused the children and one had remarked it sounded like “Winnie the Pooh”. But nobody had given it any further thought, not even me. It was just a proper noun, after all. She continued, “Look at her body, she has designs that look like flowers. In my mother tongue, Mallipoo is the name of a white flower.” There were collective gasps and oh ya-s in the class. This to me was magical! The children had surmounted the second challenge, they were able to make meaning of the text, go beyond it and connect bits from the story to their own life!

In English medium schools we often tend to privilege English over other languages. Some schools go to the extent of banning children from uttering a word in any language other than English. We need to wake up to the resourcefulness of multilingualism in our classrooms, especially when teaching a second language like English. My students got excited seeing familiar words in an English story book. It brought them closer to the world of the story. The fact that their teacher used it in the session seemed to validate their home language in some way. This simple act instilled a sense of confidence in the children to speak up in a group. Most importantly, as a teacher, using words from their own home language allowed me to reach out and establish a personal connect with them.

So next time you’re in an English class, don’t bite your tongue when you occasionally slip into another language. Let’s celebrate our languages!

The author works as a language educator at Muktangan, an NGO partnering with Municipal Corporation Schools in Mumbai. She can be reached at [email protected].