When viewed from space, Earth is described as the ‘Blue Planet’ because it is the only planet in our solar system that has a world ocean. Covering 71 per cent of the planet’s surface, the ocean and its coastlines provide fascinating topics of study for those with an interest in the geography of the sea. Marine geography is the study of the social and economic relationships between people and the physical environment of the sea including ecosystems; it is geography with a difference. 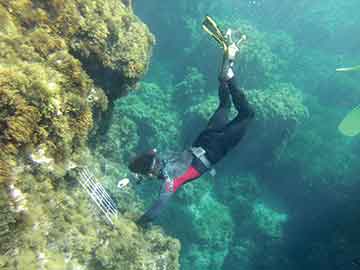 Traditionally, geography was based on a particularly terrestrial focus. Most atlases showed the seas as areas with little or no detail. Nowadays, thanks to modern technologies such as remote sensing, hydrographic surveying, seismic mapping and deep-ocean submersibles, a whole seascape of submarine features and valuable resources is still waiting to be explored; and the low water line of the tide is no longer a barrier to academic study.

It is true to say that the surface of the moon is mapped in more scope and detail than the underwater world of the world ocean. This is strange because no country in the world can support its industries and populations without the use of sea transport – more than 90 per cent of world trade is carried by sea. The oceans are increasingly viewed as future resources of food, energy, minerals, chemicals, and space.

Marine geography offers teachers and students the opportunity to integrate the components of physical and human geography invoking both deep sea and shallow coastal environments. Traditionally, courses have deliberately encouraged a ‘hands-on’ approach to field and laboratory support studies, with dedicated field courses and offshore experience. Marine geography is the epitome of a multidisciplinary subject as it encompasses physical, human, and biological characteristics focused on marine resource exploitation set in the context of sustainable development and environmental protection.

The last frontier
Historically, society’s relationship with the sea is inextricably linked with its progress on the planet. It is no coincidence that the rise of civilization runs parallel with the technical development of seafaring. The sea and coastline offered a line of defense and an invitation to travel. For generations, ships have provided the most economical means of transporting bulk cargoes and the fleets of fighting ships on whose strengths empires rose and fell, and political boundaries changed shape. Up until the industrial revolution, ships were the largest and most complex objects produced in most societies, and the special buildings of ports and ships are peculiar and intricate links between people and the marine environment. Even today, ship-building and ship-breaking are highly significant activities, particularly in India in terms of jobs and environmental impact.

Dr Christopher Wooldridge is Affiliated Academic Staff Member, School of Earth and Ocean Sciences, Cardiff University. He can be reached at Wooldridge@cardiff.ac.uk.

Dr Rupert Perkins is Director of Marine Geography, School of Earth and Ocean Sciences, Cardiff University. He can be reached at PerkinsR@cardiff.ac.uk.