My primary math teacher’s son, studying in class 7, told her that he had not understood a word of what his math teacher had taught that day. When she went through his notebook she found that his teacher had started the topic “Volume” and had written down a number of formulae for finding the volume of common 3D geometrical objects. When she talked to her son, she realised that her son had been thinking of ‘TV volume’ all the time in the class and wondering what the formulae had to do with raising or lowering the TV volume! 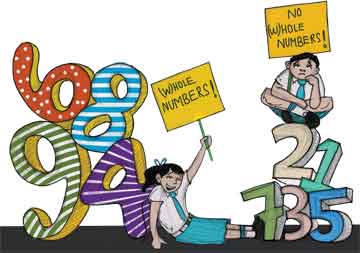 This incident got me thinking about the difficulty that students encounter with an ‘unfamiliar’ language when they learn mathematics. This article is the product of continued thinking on this topic.

Universally, mathematics is considered a ‘difficult’ subject. Many people even claim with pride that they were not good at mathematics while in school. However, if we think a little deeply, mathematics should be easier to learn than any language. Spoken language changes in many subtle ways with every 50 kms. But the mathematics of tribes, including those who have been out of contact with the rest of humanity, is essentially the same, being based on the decimal system.

This is because at their origin, the concepts of mathematics spring from human experience. There are even theories that one of the essential components in the brain that differentiates us from non-humans is our ability to recogsize patterns around us in Nature and derive mathematics as a language to describe these patterns. All humans are born with ten fingers. This is at the root of the decimal number system developed by human societies. Fractions developed from the idea of sharing, which again is a common experience for all humans.

Then why is mathematics considered a difficult subject to learn?

The author is the Principal at KD Ambani Vidyamandir, Jamnagar. He can be reached at sundaram48@yahoo.com.