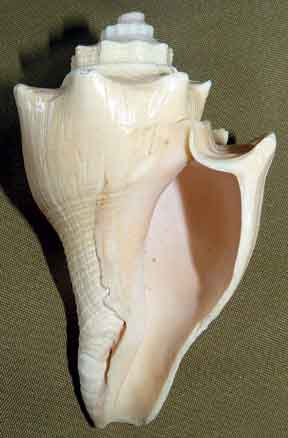 In this second of this two-part series (the first part appeared in March 2012 issue), I bring to your attention those molluscs that secrete only a single shell to live in. These mollluscs are called gastropods and the shells they create for themselves are nature’s most exquisite architecture in lime. Gastropods may be found on every conceivable habitat on earth, from mountains to deserts, rainforests to deep sea oceans, freshwaters and soils; but they are most familiar for us from our beaches. There are land snails, tree snails, besides the ones in fresh and marine waters. They may be grazers, browsers, suspension feeders, scavengers, detritivores, and carnivores. In size there are many yet to be discovered ones in the range of 0.5 mm and many large ones are already the prized possessions of several shell collectors. Syrinx aruanus, or false trumpet, 91 cm long and weighing 18 kgs, is the largest living shelled gastropod in the world. These are found in the waters of Indonesia and Papua New Guninea.

There being so many varieties, it was a struggle to decide which ones to include in this article and which to leave. I have chosen those that you can collect on the shores and a few that hawkers sell on beaches.

Gastropods have a spirally coiled shell. Coiling is generally right handed (dextral) except in a few cases, – the celebrated and revered Shankh – where the spirals are left-handed (sinistral). Hawkers generally pass off a dextral white conch shell as the sacred Shankh to unsuspecting tourists; so be warned when you look at the shell. Identify the conch by its aperture which will always be on the left in a sinistral shell and on the right in the normal dextral one. The land snail shown has a sinistral spiral whereas the conch has a dextral spiral.